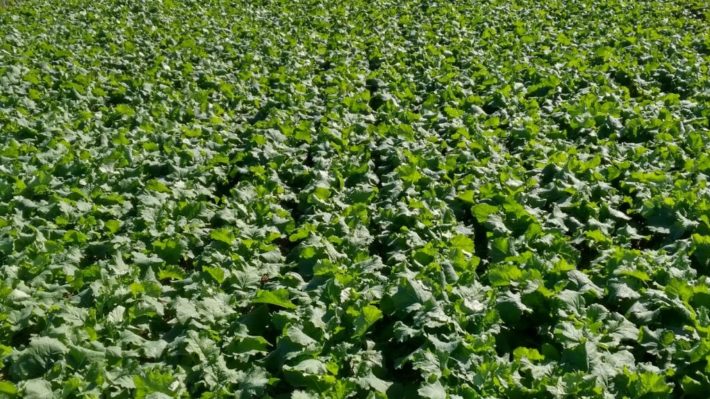 Winter canola fields across Essex, Chatham-Kent, Wellington, Hamilton-Wentworth, Haldimand and Niagara have been assessed in fall of 2018. Approximately 900 acres have been scouted in 20 fields. The goal is to take observations on plant populations and plant size in the fall, and assess winter survival in the spring. The observations will be used to assist producers with future planting decisions, and may support improvements to crop insurance programs for winter survival. Some guidelines on winter canola are provided below, followed by a summary of the assessments made this fall.

Guidelines on Seeding Rate and Population

Aiming for the higher end of these population ranges can provide a buffer against overwintering losses and other stresses in spring and summer. Producers should bear in mind that under average conditions only 40 to 60% of seeds typically emerge, although this primarily applies to where a seed drill is used for planting. The more precise depth placement and singulation achieved by a corn planter may result in higher rates of emergence than when a drill or grass seed box is used.

In a 2017 trial in Kenilworth, use of a corn planter resulted in faster rates of emergence and more consistent stands compared to a drill, although average populations were similar in the end. The importance of seeding to the appropriate depth was made clear in a trial at the Elora Research Station in 2016. Emergence rates using a John Deer planter and RRV after-market canola plates were near 100% at a depth of 2.5 cm, but were only 52% at a depth of 4 cm and 80% at 0-1 cm.

Survival of canola through winter and early spring is impacted by many factors including snow cover, length of winter, soil type, variety, and plant growth stage. The growth stage prior to winter is impacted by planting date, weather, and fertility. In the fall, application of 30 to 40 lbs of actual nitrogen is recommended. Lack of nitrogen early on can significantly reduce the growth rate of seedlings (Figure 1). 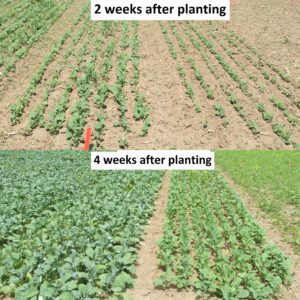 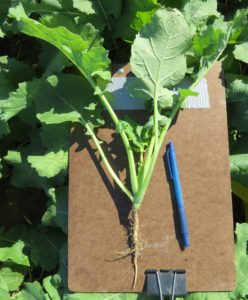 Figure 2. Canola roots on October 15, 2018 approaching the size of a pencil in a Blenheim area field planted on September 8, 2018.

Ideally, winter canola should have a root the length and diameter of a pencil for good winter survival (Figure 2). Canola survives on its root through the winter, unlike wheat which survives on the seed. Large roots are also important in anchoring the plant in the ground. Ontario farmers have reported that poor winter survival of winter canola in the 1990’s was often because of heaving during early spring thaw-freeze events. Fields with heavy soils that are prone to heaving may show reduced survival. 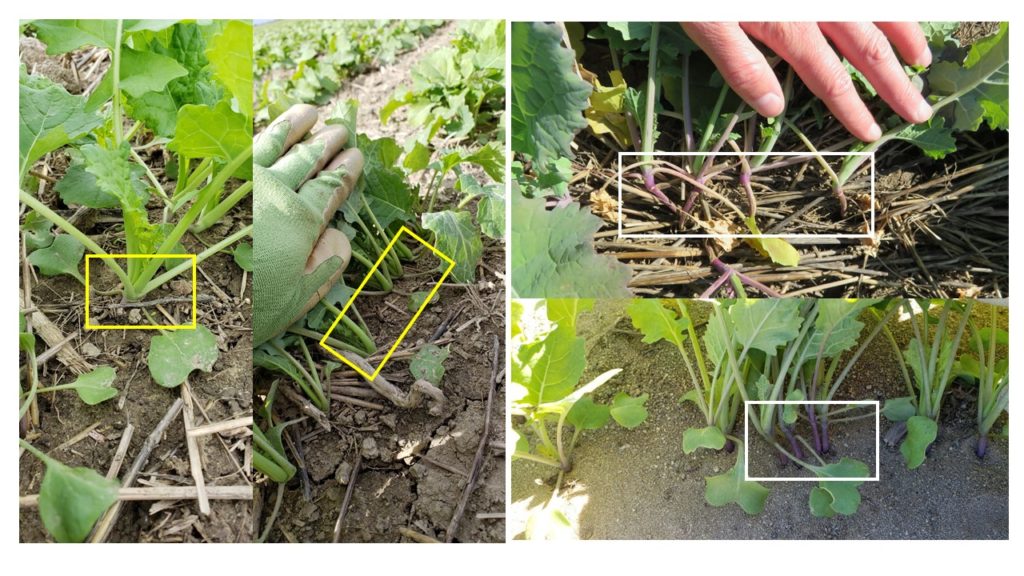 Some guidelines on winter survival can be found here in an article from Kansas State Research and Extension, although conditions in Kansas are not necessarily the same as Ontario.

Planting dates in the 20 fields ranged from Sept 7th to Sept 30th (Figure 4). The field with the most vigorous growth and largest roots was planted Sept 8th in Chatham-Kent on 15” rows using an air seeder. This field was at the 6 leaf stage when it was scouted in mid-October. Many of the fields were planted around September 19th and were at approximately the 4 leaf stage by mid-October. Ideally, plants should have 5-8 true leaves heading into winter, and roots with a ¼” to ½” diameter. Plants that are larger or smaller are at greater risk of winter kill, so populations in the scouted fields may be somewhat reduced by spring. Although we like to see uniform stands it is common to see a range of growth stages in a canola field, especially when seeding depth is less precise (e.g. a seed drill is used). 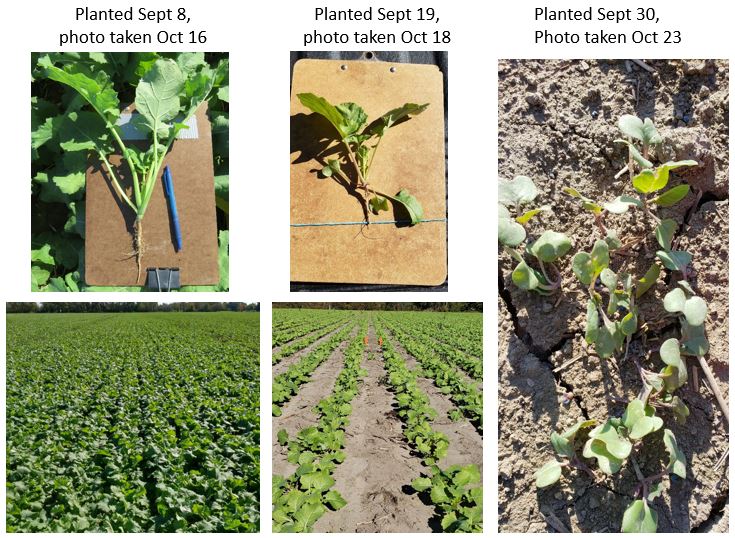 Figure 4. Comparison of winter canola fields planted from early to late September 2018 in Essex and Chatham-Kent. These growth stages are representative of other fields planted on the same dates. 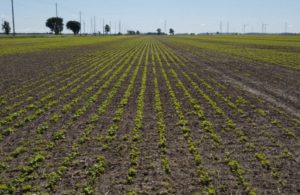 Figure 5. Wet conditions at planting reduced plant stands in many fields. In this field, emergence was poor between tile runs.

It is estimated that 12 of the 20 fields are at the optimal growth stage for winter survival and 12 (not necessarily the same fields) have strong populations. We are still learning about winter survival with modern hybrids across different regions in Ontario. Plants with less than 5 leaves have been observed to survive winter at Harrow in some years, but not always. However, plants that have 5-8 leaves but have elongated hypocotyls (crowns not sitting at soil surface) may not survive as well as hoped. Populations may become thinner by spring. This year, none of the fields were planted so early that they bolted (stem elongation with flower buds forming); bolted plants do not survive winter.

Rain in early September delayed planting in some areas, and excessive moisture reduced plant stands in a few fields (Figure 5). In areas with high amounts of crop residue plant stands were typically thin; this is likely a combination of poor seed depth placement, emergence issues, and slug feeding (Figures 6 and 7). On the other hand, fields with full tillage were often quite hard and crusted (Figure 8) which can also negatively impact emergence. 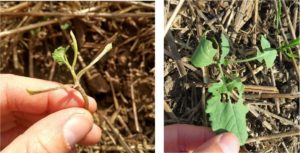 Figure 6. Slug damage is common where residue is thick. Feeding and slime can indicate slugs are present, but they may eat the entire plant making it difficult to find stems and identify that slugs were the cause of stand loss. Photos were taken in October 2018. 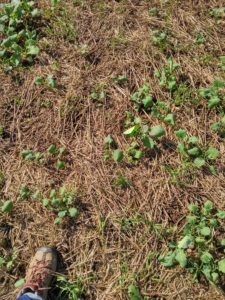 Figure 7. Emergence is poor where residue is thick in this Hamilton-Wentworth field. It may be a seeding depth issue, inability of the seedling to come through residue, or slug damage – most likely all of the above. 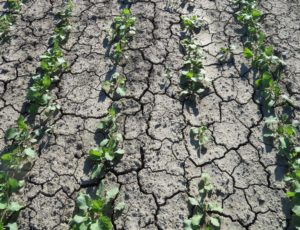 Figure 8. Crusting was common in fields with full tillage, and likely contributed to poor emergence and thin plant stands.

In one field, an application of Eragon at 6 weeks prior to planting is likely the cause of an unacceptably thin stand. Winter canola cannot be planted in the same year as an application of Eragon. Other herbicide carry over restrictions can be found in OMAFRA’s Guide to Weed Control. Downey mildew was confirmed in some fields (Figure 9). It is not a fungus so it cannot be controlled with fungicides, but the disease should not impact yield or winter survival at the levels observed. 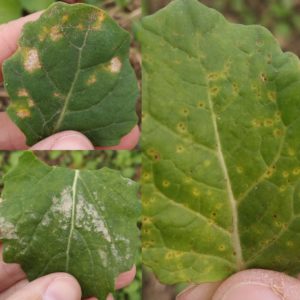 Producers or crop advisors with questions are encouraged to contact Meghan Moran at any time.  Meghan is very interested in visiting fields and supporting producers, and is working closely with Dr. Eric Page and Sydney Meloche at AAFC Harrow to develop more information for winter canola growers. 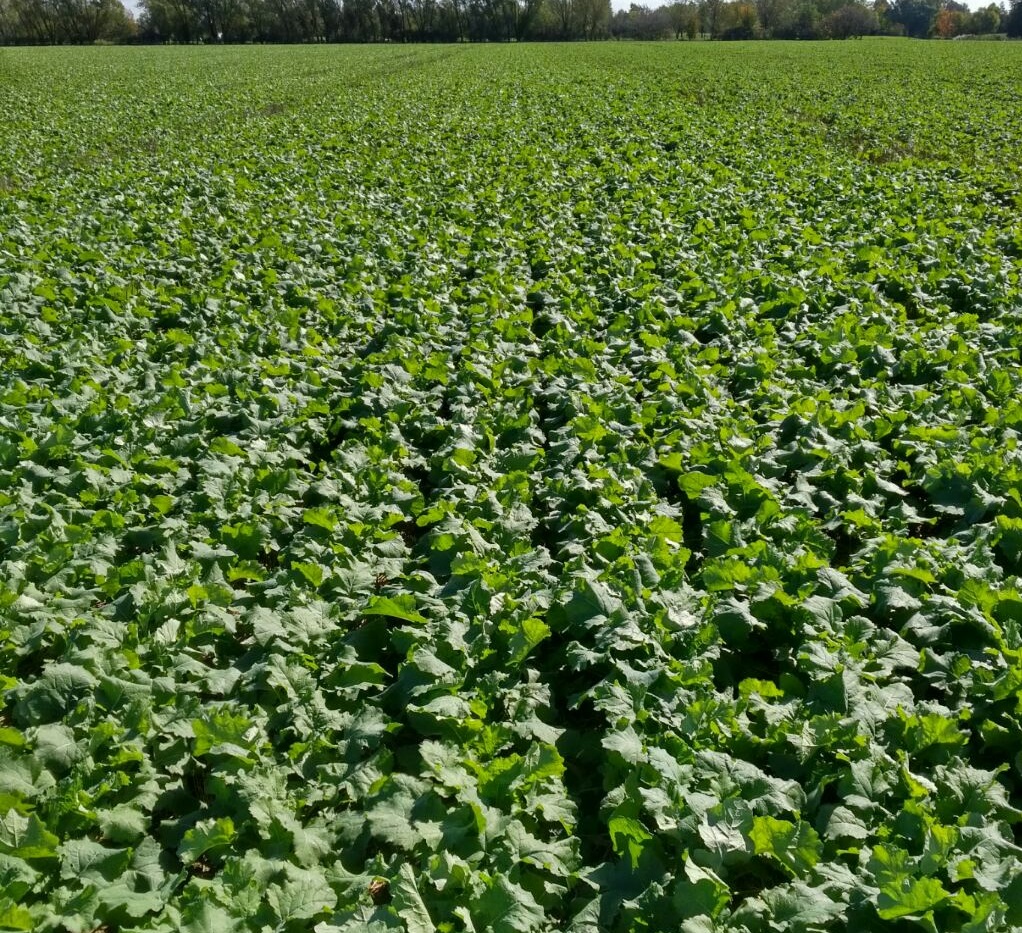