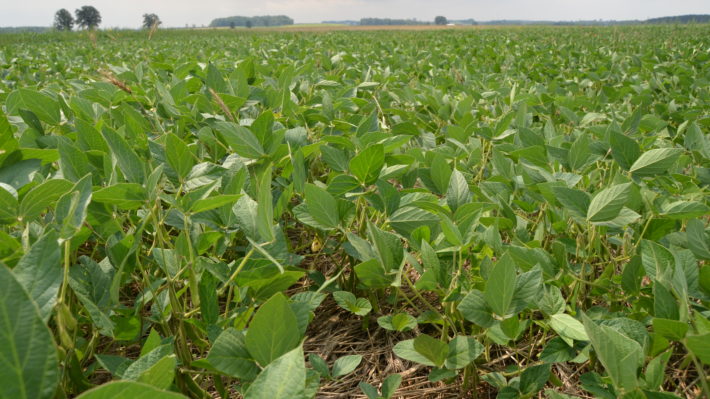 Organic soybean production relies on a significant amount of tillage. When done well, yields can rival conventional production. There are drawbacks, however, including a high labour demand in the spring and the potential for soil degradation over time. Cover crop-based organic no-till soybean production techniques have been developed in recent years and proven to work in parts of the US. The question is, will they work under Ontario’s climate and soils?

Cover crop-based organic no-till soybean production uses a roller crimper, a drum with chevron-shaped blades (Figure 1) that’s used to crimp the stems of rye (or another suitable plant) once it’s flowering and kills it. You then seed soybeans into the mulch. If it’s thick enough, it provides season-long weed suppression. The cover crop-based organic no-till system offers advantages in terms of labour savings and soil health improvements. 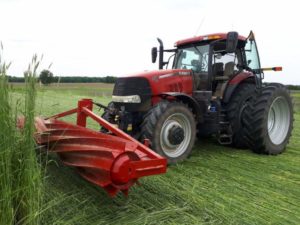 Two replicated and randomized strip-trials (Drayton and Elora) were used to compare cover crop-based organic no-till soybeans to standard production practices in 2019 (30-inch tillage-based organic soybeans and 15-inch no-till soybeans, respectively). Three on-farm organic no-till sites were also monitored (Blyth and two near St. Marys). At all sites, rye was seeded on an angle (> 20 degrees) relative to the direction of roller crimping and soybean seeding. Common cereal rye was seeded before the end of September at a rate of 3 bushels/acre (168 lbs/acre) at both strip-trial sites and one on-farm site. Rye was seeded at 100 lbs/acre at the remaining sites.

Rye biomass is key to success

A thick stand of rye is critical for success in the system. It prevents weed germination and growth, particularly of small-seeded annuals. Regions such as southern Pennsylvania and North Carolina have found that 8,000 lbs/acre biomass is required for sufficient weed suppression. In upper New York state, however, the threshold is lower – more like 6,000 lbs/acre. Across all sites in 2019, the average biomass at termination was 5,800 lbs/acre (dry). 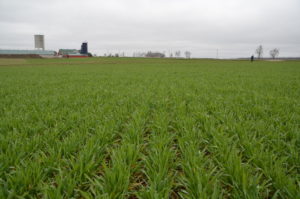 Rye seeding rate did not impact biomass – averages for both rates were practically identical (5,800 lbs/ac biomass for the 168 lbs/ac rate and 5,760 for the 100 lbs/ac rate). Rye responded to lower seeding rates through increased tillering.

June 7th was the earliest date of crimping at any site in 2019. Average crimping date across all sites was June 12th. Under more normal spring conditions, it’s likely that full rye flowering (anthesis) for the region will be reached between June 1st to 10th.

Achieving a competitive soybean stand is the next step

Seeding soybeans to a sufficient depth, closing the seed slot and achieving a competitive stand is the next key to success of the system. US-based seeding recommendations are typically 225,000-250,000 seeds/acre – a higher rate than normal. All sites were seeded at a rate greater than 200,000, with an average of 277,500 seeds/acre.

No-till drills were used to seed soybeans at all sites at 7.5-inch spacing, except Elora, where a 15-inch no-till planter was used (Figure 3). Soybeans were seeded before crimping at the Drayton site (Figure 4). Generally, it’s recommended to use a modified planter, adapted for planting into thick residue.

The drilled fields, on average, had acceptable stands; slot closure, however, wasn’t achieved by any drill across five sites due to moist conditions under the rye. Fortunately, ample rainfall after seeding ensured reasonable germination and emergence. 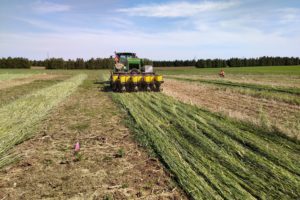 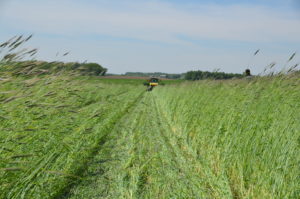 Figure 4. Drilling soybeans into standing rye on June 8th at the Drayton site.

The thinnest stands occurred at Blyth (122,000 plants/acre) and Elora (87,000 plants/acre). At Elora, this was likely due to surface compaction caused by a second crimping pass. Seeds germinated but couldn’t emerge underneath tire tracks (Figure 5). At the Blyth site, the drill didn’t cut through thick rye residue well (Figure 6), which resulted in stand gaps. 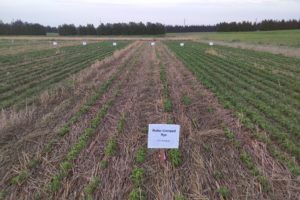 Figure 5. A compromised soybean stand in a roller crimped strip at Elora, as seen on July 10th. 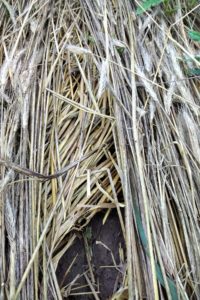 Figure 6. An example of where the no-till drill was unable to cut through rye residue and place seed into the soil at the Blyth site.

At the strip-trial sites, soybeans planted into roller crimped rye lagged one growth stage behind the no-rye control throughout the season. The difference was greater at the Drayton site (Figure 7), due to a thicker rye mulch and because the soybeans spent approximately three weeks under a standing rye canopy (crimping occurred on July 8th). By late August, the roller crimped soybeans at Elora were nearly the same height as those in the control strips; those at Drayton, however, remained about 40% shorter and only fully canopied in late August.

Figure 7. Boundary between a no rye control strip with 30” soybeans and drilled, 7.5” no-till organic soybeans at Drayton site on July 22nd (left) and August 20th (right). Delayed crimping caused soybeans to lag behind more than would normally be expected.

The organic no-till soybeans yielded 8.6 bushels/acre less than the tillage-based soybeans at Drayton (Table 1). Given that the no-till soybeans spent a full month – from seeding to crimping – under the canopy of the rye cover crop, this was a surprisingly small difference. The no-till soybean plants, despite their small size, had a comparable number of pods but had smaller beans and fewer beans per pod.

At Elora, roller crimped soybeans yielded 14.3 bushels/acre less than those in the no-rye control treatment. A poor soybean stand in the roller crimped treatment was likely the main contributor to the lower yield. A sub-90,000 soybean stand, planted on June 12th, was not able keep up with the full stand in the no-rye control treatment. The mulch generally provided sufficient weed suppression through the critical weed-free period (V1-V3), though warm-season grasses emerged later in the season and produced viable seed by harvest.

A combination of factors resulted in an unharvestable field at the Blyth site, including: uneven rye establishment in fall 2018, higher grassy weed pressure, late soybean planting (June 17th) and gaps in the soybean stand due to ineffective cutting of the rye mulch by the no-till drill. Sharper discs and a higher soybean seeding rate may have helped in overcoming some of these issues.

Based on this season’s observations, the following lessons were learned:

The trial will continue to evaluate the cover crop-based organic no-till system using best practices in 2020 at several sites.

This project was supported by OSCIA Tier 2 project funding. Donations of cereal rye seed were generously made by Thompsons Ltd. and Cribit Seeds. Thank you to the farmer cooperators who participated. 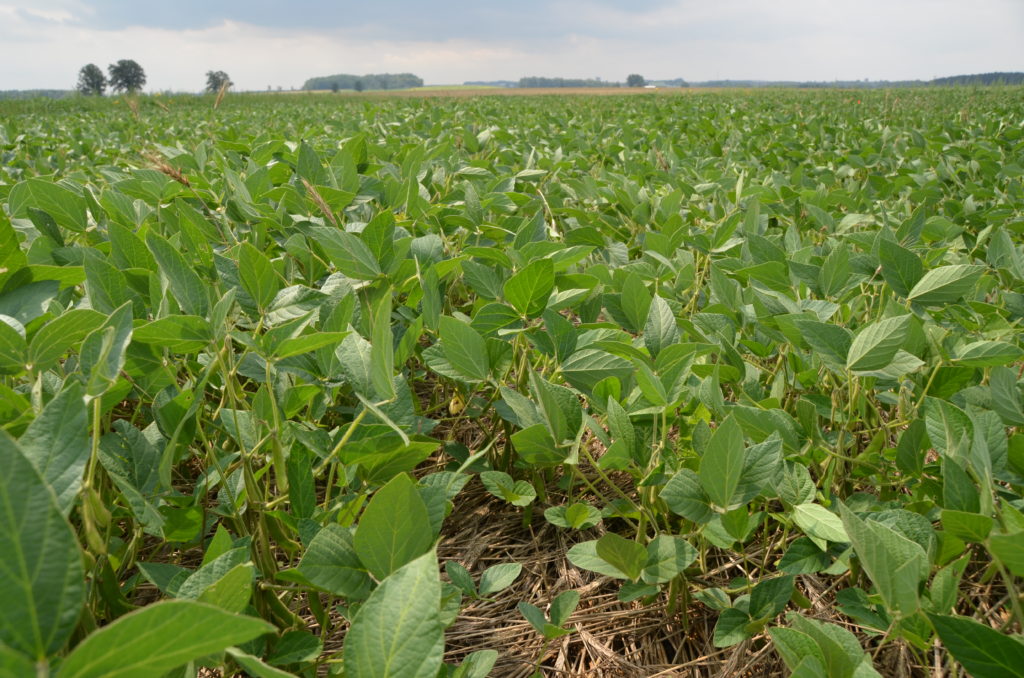