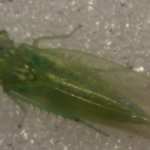 Potato leafhopper (PLH) is the most damaging alfalfa insect pest in Ontario in most years. While the damage created is not as dramatic as an alfalfa weevil or armyworm outbreak, leafhopper damage is more chronic and widespread. Many farmers are unaware of the significance of PLH damage, which is often blamed on the hot, dry weather that frequently accompanies it. PLH damage is common across southern Ontario. The Niagara area and counties north of Lake Erie are particularly affected and extensive damage often results.

PLH do not overwinter in Ontario, but migrate annually from the Gulf States carried on weather-front air currents. They usually begin arriving in late May. Adult leafhoppers are 3 mm (1/8th inch) long, lime green and wedge-shaped. The adults lay a few eggs per day in the alfalfa stems and petioles, which hatch about 9 days later. Juvenile leafhoppers, also called nymphs, are about 1 mm (1/32nd inch) when they hatch. They resemble adults, except they are wingless and are often found on the underside of the leaves. 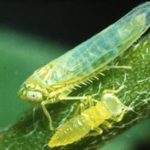 The generation interval is short, with about 25 days from egg laying to the adult stage. This gives the leafhopper the ability to have an explosive population growth. Farmers walking in their second and third cut alfalfa fields can often see leafhoppers flying or “hopping” sideways, as they are disturbed. PLH are killed by frost in the fall. Leafhoppers feed on a wide variety of host plants, including edible beans. Biological controls have not been very effective.

Leafhoppers feed by inserting a stylet into a leaf midrib and sucking sap juices from the plant. They inject saliva containing a toxin into the plants as they feed. This causes abnormal cell growth and interferes with transportation of fluids and nutrients in the leaves. The result is the characteristic “hopperburn”, which starts as a wedge-shaped “V” yellowish pattern on the leaf tips. (Figure 2) 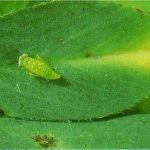 PLH feeding causes reduced stem elongation, reduced root development, leaf cupping and stunting. Yields can be lowered by as much as 50% with a severe infestation, accompanied by reduced protein levels. Decreased stand vigour results in slow regrowth following cutting and increased winterkill. New seedings are very susceptible. Most of the damage occurs from June to mid-August. Symptoms are sometimes confused with nutrient deficiency or herbicide injury, and are often dismissed as “drought damage”. 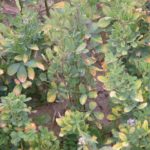 Figure 2 – Potato leafhopper injury is most severe in new seedlings and in young regrowth. 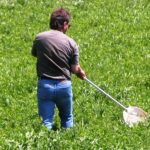 Economic losses occur before plant symptoms develop, so it is important to identify the presence of large leafhopper populations before the damage occurs. It is particularly important to monitor new seedings. Scouting with a sweep net will help you determine whether early harvest or spraying is needed. Scout at intervals of 5 to 7 days, beginning after first cut. To determine the number of leafhoppers, including adults and nymphs, take 10 sweeps and divide by 10. Do this in 5 representative areas of the field and note the height of the alfalfa. Recommended action thresholds are listed in Table 1.

It should be noted that spraying insecticides on alfalfa will also kill beneficial insects, the natural enemies of PLH and alfalfa weevil.

For performance characteristics of these varieties, refer to the Ontario Forage Crop Variety Performance brochure at www.goforages.ca. Keep in mind that the yield index data comes from locations that typically do not have severe PLH damage.  As alfalfa breeding and performance testing efforts continue, there will be more high performance varieties introduced with “Highly Resistance” PLH ratings.