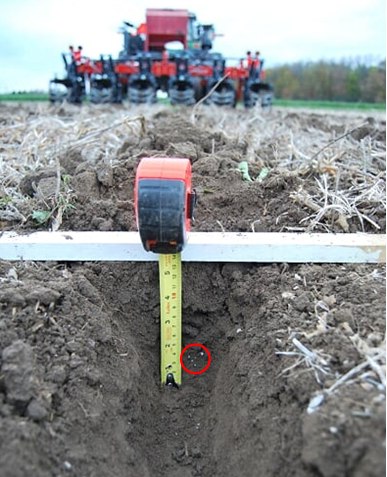 Based on first year results (2019) of applying moderate amounts of P&K fertilizer (60 lb/ac of both P2O5 and K2O) at five trials with low soil fertility: 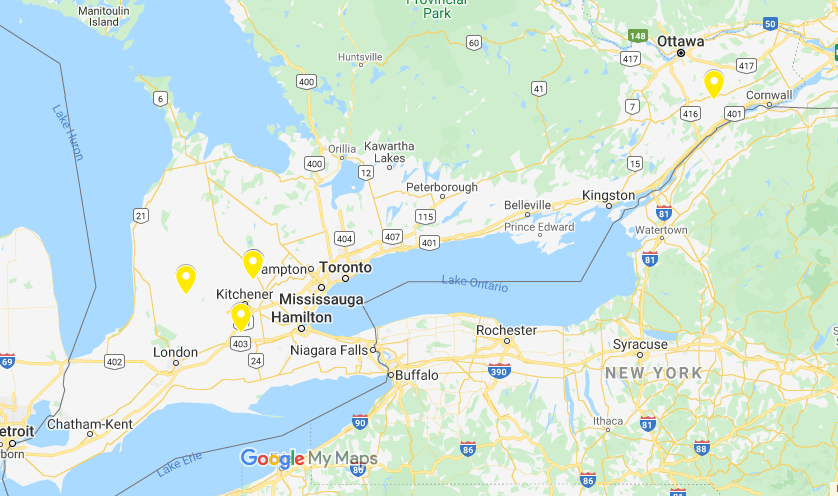 Figure 1. Strip till trial locations in 2019

Treatments used to investigate questions 1 through 4 above include:

Strip tilling was completed with a 6×30” Kuhn Krause Gladiator (Fig. 2) shank-style strip tiller operating 6” deep, while full width tillage was completed with 2 spring passes of a finishing disk/harrow leaving mostly bare soil. Full width tillage was fall chisel plowed at some locations. Strip till fertilizer was applied by banding tube behind the strip tiller shank at 4” depth (Fig. 3) while planter starter fertilizer was applied by 2”’x2” band. Past Ontario research demonstrates that deep banding strip till fertilizer (eg. 6”) tends to not provide starter fertilizer response, so 4” depth was selected with aims of balancing crop safety with fertilizer response. Broadcast treatments were surface broadcast between spring tillage passes. To investigate yield response to P&K placement and timing, 60 lb-P2O5/ac and 60 lb-K2O/ac (mono-ammonium phosphate and muriate of potash blend) were applied for all treatments, (roughly 1 corn crop removal, high enough to elicit yield responses, not too high to saturate responses or cause significant crop safety issues). All treatments received 30 lb-N/ac as urea applied in 2”x2” band on the planter, with the balance of N usually applied as UAN sidedress. 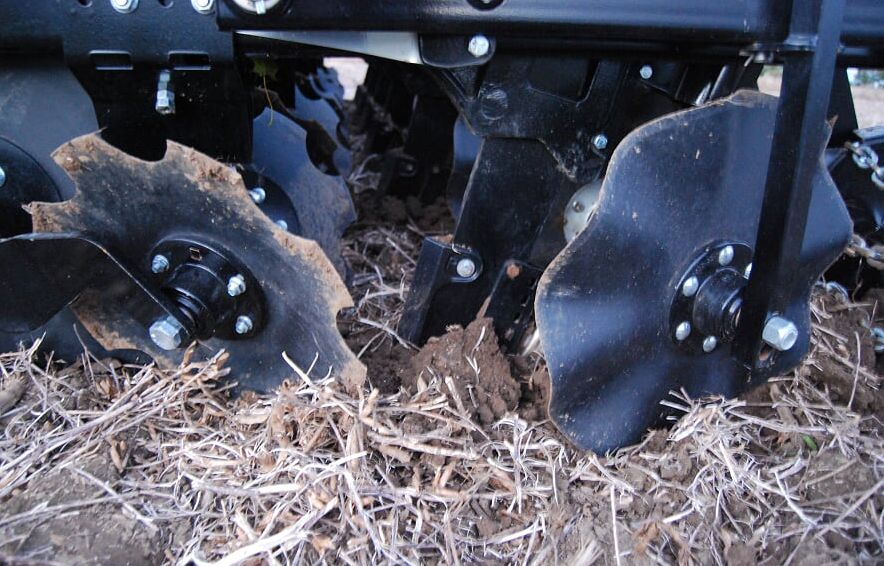 Safe Fertilizer Rates with Strip Till

Fertilizer rates and placement in this project are riskier than these guidelines. Strip till bands in this project are closer to the seed (2” below) than 2”x2” planter starter bands (2.75” diagonal offset) and rates are higher (90 lb/ac of N+K+S) than safe guidelines (71 lb/ac of N+K+S). The rates and placements applied with these treatments should not be considered as safe fertilizer practices.

In order to detect differences in yield response between P&K application timing and placement, these trials are generally reflecting worse-case scenarios – moderate amounts of fertilizer being applied on low fertility soils. Results should be interpreted in this context. They also only represent one year of results, so interpret with caution.

Were trials responsive to P and K applications?

When evaluating fertilizer placement and timing, it’s important to know if trials were responsive to P&K in the first place. Comparing yields of full width tillage treatments where P&K were spring broadcast (treatment 2) to where P&K were not broadcast (treatment 1) gives an indication of responsiveness. On average, there was an 18 bu/ac yield response to broadcasting 60 lb/ac of both P&K in the full width tillage system, with significantly positive yield responses occurring across most locations (Fig. 4). As suggested by the low soil tests, these trials were responsive to P and K. 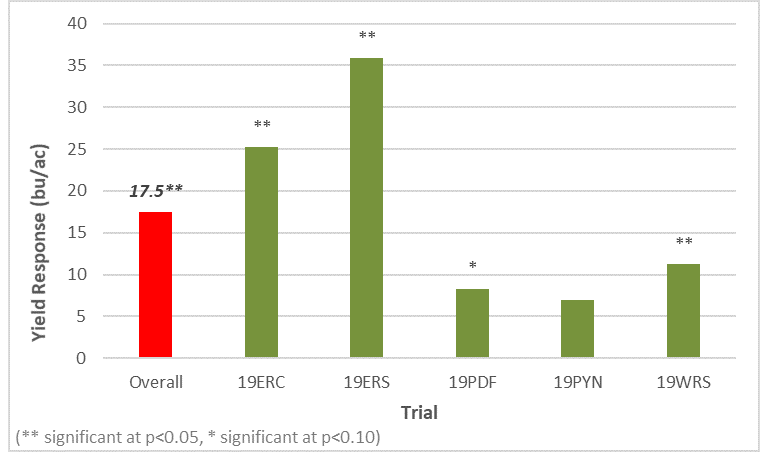 How does yield of broadcast and incorporate P&K in a full-width tillage system compare to strip till with strip-placed P&K?

Is there greater yield response for placing fertilizer in the strip close to the corn plant with strip till compared to broadcasting fertilizer under full width tillage? On average, there was a 10 bu/ac yield advantage for spring applying P&K with strip till compared to spring broadcast and incorporation of P&K under full width tillage, with positive yield responses at most trials (Fig. 5). 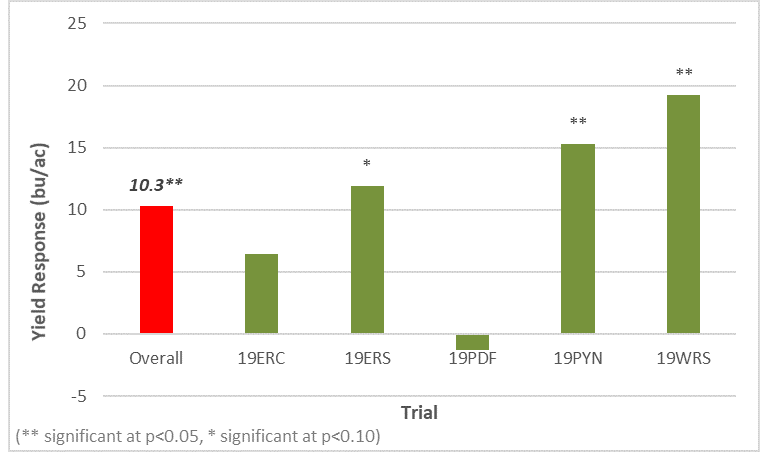 Figure 5. Yield response of P&K applied through spring strip till compared to spring broadcast and incorporate with full width tillage.

While there was a clear yield difference between these systems, unfortunately we don’t know how much of each different factor contributed to the yield response – the difference in spring tillage (strip till versus full width tillage) or differences in fertilizer placement (strip band vs broadcast), although research clearly shows greater fertilizer yield responses for planter banding over broadcasting on low fertility soils (Brown, 2017).

If ground allows a grower to strip till in either the spring or the fall, from strictly a yield perspective, is there a preferred time to do so?

Another common question, if a grower is on soil they are comfortable strip tilling and applying P&K in either fall or spring, is there a preferred time to do so from strictly a yield perspective? (temporarily ignoring logistical and soil erosion risk differences). On average there was a 7.5 bu/ac yield response to strip till and P&K placement in the spring compared to the fall, though responses were variable with some trials having strong responses and others being no different (Fig. 6). 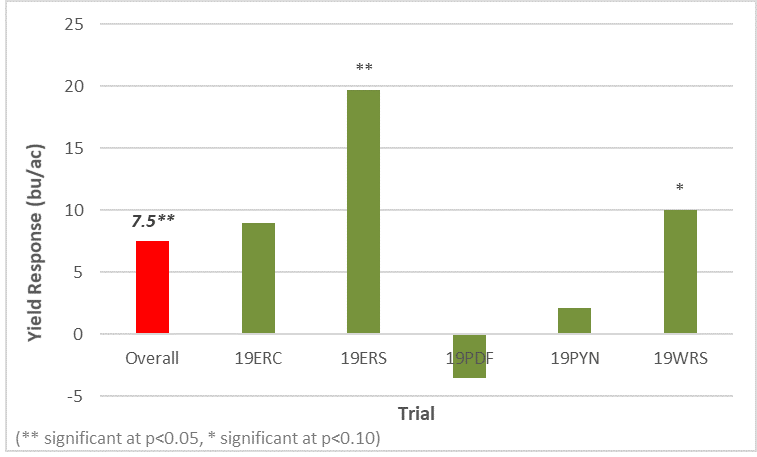 As before, while there was a yield difference, we can’t know how much of each different factor (fertility timing, tillage timing) contributed to the yield response with the treatments imposed. There are again some practical questions – would this strong of response still be observed on higher fertility soils, or under a scenario where we can more safely apply higher rates of fertilizer in the fall that we can’t in the spring? As also mentioned, yield may not be the only factor when deciding between fall or spring strip till (fertilizer and labour logistics, fertilizer rates, soil condition, erosion risks). Last, these trials were all fairly conducive for spring strip till operations.

If a grower fall applies P&K in the strip, is there yield response for moving a portion of this fertilizer to starter P&K on the planter in the spring?

For logistics and planter efficiency, it would be ideal to incorporate all fertilizer through the strip tiller and plant without starter fertilizer. But the question arises, if we are applying fertilizer in the strip in the fall, is there a benefit to having some starter fertilizer on the planter next spring? Overall, there was no significant yield difference for splitting 60 lb/ac P&K applications between fall and spring (50% of P&K in fall strip, 50% as planter starter) relative to applying all P&K in the fall strips with no starter fertilizer at planting (Fig. 7). There was one location (ERS19) where there was a significant yield response (10% level), but no significant difference at other trials. 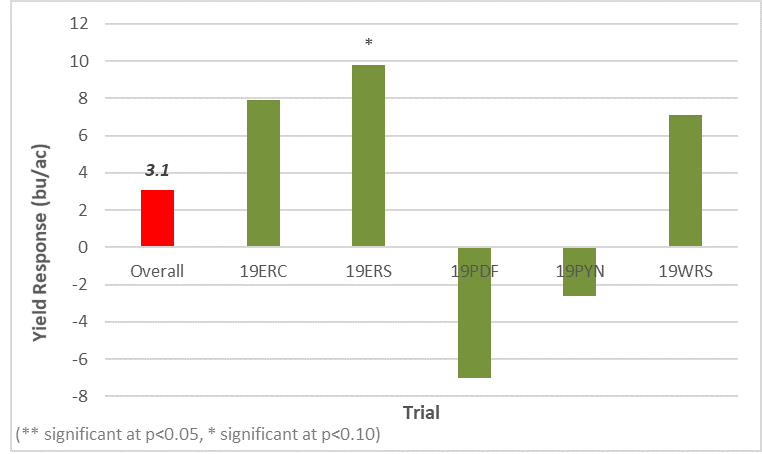 In practice, fall P&K applications with strip till would likely be at much greater amounts than these treatments trying to detect differences in efficiency, perhaps further lessening responses. There may also be similar starter fertilizer questions for spring strip till, but this treatment was not evaluated.

How does yield performance of strip tillage compare to full width tillage?

Because of differences in fertility placement for these treatments, we didn’t have true comparisons that would isolate only tillage effects. Yields of both systems where very comparable (Table 2), demonstrating strip till could accomplish yields very similar to full width tillage. The only exception to this was the spring strip till P&K treatment which on average was higher yielding than the full width tillage treatments, likely influenced by the high rates of fertilizer applied close to the seed on low fertility soils.

Table 2. Treatment yields across all locations

When making treatment comparisons within trials (columns), yield cells containing the same letter are not significantly different at the 10% level.

This is the first of three growing seasons for this project. Report will be updated as trials are completed it 2020 and 2021.

The information delivered from these projects is not possible without assistance for funding, equipment, trial co-operation and technical field support. Thanks to Grain Farmers of Ontario and Canadian Agricultural Partnership for project funding. Thanks to Stoltz Sales and Service and Kuhn Canada for providing the strip tiller for the duration of the project. Thanks to Premier Equipment and John Deere Canada for providing tractors to make field trials possible. Thanks to the on-farm co-operators, and Scott Banks, Holly Byker and Ben Melenhorst for conducting the Winchester trial. Thanks to Alissa Reid for her hard work and dedication completing field trials in 2019.