Alfalfa weevil can be an issue in Ontario, particularly in south-western parts of the province. While outbreaks tend to be isolated, they can be severe and dramatically reduce forage yield and quality. Typically, alfalfa weevil do not reach significant levels until we are ready to take first-cut. However, sometimes alfalfa weevil larvae development is advanced relative to the alfalfa crop, and can do significant damage before the crop is ready to cut. Control options are to cut early or spray. Insecticides are recommended only when cutting is impractical, such as when the alfalfa is in the pre-bud stage.

The adult alfalfa weevil overwinters as a 4 – 5 mm (3/16 inch) brown snout beetle. There is a single generation per year. Adults overwinter in plant debris and become active in April. They chew small holes in the base of alfalfa stems and deposit their eggs. Larvae hatch from eggs and crawl to the tops of alfalfa, where they feed on developing leaf buds and leaves. The developmental stage of alfalfa weevil can be predicted with a Growing Degree Day (Base 10ºC) model.

Larvae are pale to bright green, with a black head and white stripe down the centre of the back. The 1st instar larvae are yellow-green and about 2 mm (1/16th inch) at hatch. They are hard to notice unless you unfold newly formed leaves. Larvae grow to a length of about 8 mm (5/16 inch) at the fully grown 4th instar stage. This usually takes 3 or 4 weeks. Mature larvae create a cocoon and pupate. Adult beetles emerge in late-June and early-July, but usually do relatively little damage. 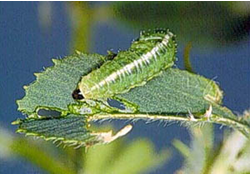 Larvae initially feed within the leaf buds and then move to the tips of the plant. Damage starts out as pinholes, and progresses to larvae feeding between the leaf veins. Heavy infestations can result in severely skeletonized leaves that give the field a grayish white appearance. Loss of leaf tissue can quickly result in lower feed quality (digestibility and protein), as well as yield. Accumulation of carbohydrates in the roots is also delayed. 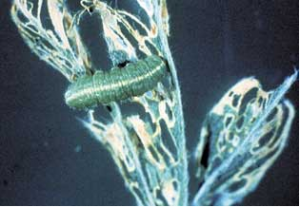 Figure 2 – Alfalfa weevil larvae feed on leaves, causing skeletonization. Note that larvae have black heads and a white stripe down their back.

Entomologists consider alfalfa weevil biological control as a success story. Since the 1950’s, when the weevil was introduced to this part of North America with devastating results, over a dozen parasitoids and predators have been released to control the weevil. Once they became established, weevil numbers and damage decreased dramatically.

In Ontario, species of parasitoid wasps (Microctonus aethiopoides and M. colesi) attack and kill alfalfa weevil by laying their eggs inside the larvae or adult alfalfa weevil. The eggs hatch inside the pest where the young wasp feed and develop, eventually killing the weevil. Severe alfalfa weevil outbreaks can be controlled by insecticide application, but the down side is that the parasitic wasps are also killed. This increases the potential for future outbreaks. For this reason it is important to spray only when warranted by scouting and threshold levels.

Alfalfa weevil is also controlled significantly by a fungal pathogen, Zoophthora phythonomi. A dry spring may inhibit this fungus and allow weevil populations to increase. Rain and high humidity during periods of peak larval numbers can cause the weevil population to crash quickly. Infected larvae curl around leaves at the tops of plants and then turn brown.

If there is a potential problem, scouting should be done twice a week. You can initially save some time by using a sweep net to determine if larvae are present. Fields seeded last year, pure alfalfa stands, and south facing slopes are more susceptible to early and heavy damage, so check them first.

A “Rule of Thumb” is that if there is 40 percent tip feeding, and 2 or 3 active weevil per stem, and there is more than 7 to 10 days to preferred harvest date, consider spraying. Tip feeding refers to the percent of plant tips showing obvious signs of damage, which is not to be confused with the percent defoliation.

To count larvae, collect 30 stems by cutting or breaking them off at ground level. Use an M-shaped pattern in the field. Place them inside a white pail and shake them against the side to knock off the 3rd and 4th stage instar larvae. First and 2nd instars are very small, pale yellow to light green, with the white stripe not yet distinguishable. They may be in the upper leaves, but don’t include them in the count.

Check to see whether the weevil larvae look active and healthy. Infected larvae are slow-moving, yellow or tan. When they die they turn dark brown. Higher thresholds should be considered when a significant percentage of the larvae is infected by fungus or parasitoids.

Peak larval activity usually coincides with the bud stage of the alfalfa, which is also the optimum time to cut for maximum quality. Occasionally, weevil development is ahead of alfalfa development, and damage will occur before it is practical to cut. Cutting before the bud stage can result in extensive damage to second cut regrowth and lower yield. Also, with high infestations, farmers may not be able to harvest fast enough to stay ahead of the weevil damage.

Cutting removes large numbers of these larvae from the field. Remaining larvae usually dry out and starve. If cutting is an option, it is preferable over insecticide application for a number of reasons, including the cost of spraying and damage to beneficial parasitic wasps and honeybees. Also consider that spraying will tramp some of the forage crop.

Registered products are listed in Table 1. Refer to the OMAFRA Publication 812, “Field Crop Protection Guide”, and product labels. Keep in mind that there are “days to harvest” restrictions with these products. Local beekeepers should be contacted so they have an opportunity to move colonies out of the danger area.

Occasionally, if weevil populations are high on a late first-cut, surviving larvae will feed on the re-growth as quickly as it develops. Such feeding can eliminate alfalfa re-growth which may lead to a loss of the stand. On severe infestations, monitor weevil activity on stubble regrowth for 5 to 7 days. The characteristic symptom is the alfalfa plant does not “green up” due to larvae and newly hatched adults feeding on the developing crown buds. The presence of 2 or more active larvae per crown, or 4 to 8 larvae per square foot indicates a need to spray the stubble with insecticide. 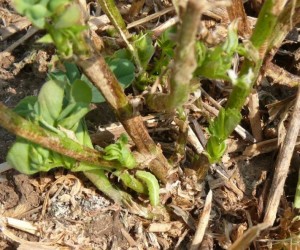