Calls have been coming in from several areas across the province reporting fields that have reached threshold and need to be sprayed.  The most recent hotspots include Huron County along lake Huron, Bruce County near Tara, fields north of Barrie, York and Durham and a large number of acres between Belleville and Cornwall.  Just coming back from Eastern Ontario, I think it is safe to say that a lot of fields will be reaching threshold there this week and next. 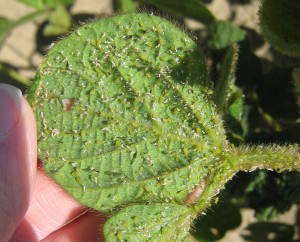 Scouting is ESSENTIAL!  Fields that were treated with Cruiser did not allow these early season aphids to build up in numbers and therefore are not reaching threshold yet so focus scouting efforts for now on non-Cruiser treated fields.

Many of the aphids I have seen this week have wing buds (the 80s shoulder pad look) which means they will be developing wings soon.  These aphids will either move to other plants within the same field or relocate to later planted fields in the area.  They could even get picked up and carried to a different region by the storm fronts headed our way….but that also means that we could receive some from Ohio and Michigan and other states.  When scouting, use a handlens and try to see if the majority of the aphids have wing buds.  If they do, go back to that field a few days later to see if the aphids are winged and are leaving or left or are just redispersing themselves in the field.  It is quite normal for there to be a summer migration of the aphids this time of year and they do tend to prefer later planted fields, rather than sticking around in the early ones they originally colonized.  But scouting these fields is very important to determine if aphids are coming, going or staying for the long haul.

3 thoughts on “Soybean Aphids Reaching Threshold in Many Fields – SCOUT!”