I am still hearing from people who are looking for WBC egg masses on corn leaves.  But unless they are scouting very late corn that is not in tassel yet, most of the WBC will already be larvae on the tassel or more likely in the ear.  So focus on scouting the ears and tassels now.

But there are other larvae that you might come across so I thought I’d help show the differences between them all.   Especially when they are small since it is harder to see their distinguishing features.  Here are some pics and helpful hints to determine which pest you are finding.   Click on each image to get a larger photo to really see the distinguishing markings. 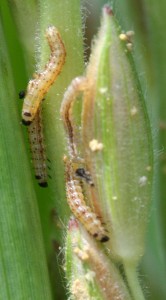 The first two instars are the hardest to ID.  They actually don’t have the two broad bands behind their head yet.  And they have spots or warts that have hairs coming out of them which they lose later as they grow.  Also, the tiny 1st and 2nd instars larvae crawl like inchworms, where they walk their back legs up close to their front legs, creating a loop in their body.  Can be easily mistaken for ECB at this young stage.

Once WBC are in their 3rd instar, they stop walking like inchworms.  And they lose their spots and finally have their broad bands behind their heads.  Their heads are also finally more of a light brownish orange  in colour.  Some will also have a dark band running along the side of their bodies but not all of them do. 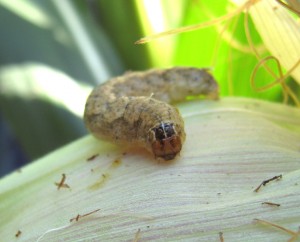 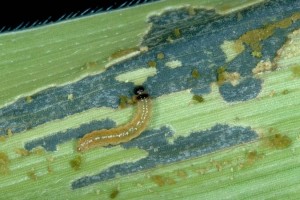 Young ECB larvae feed are too small to feed on anything but leaf or tassel tissue.  Once they grow larger they will mine into the midrib and stalk.  Young instars still have the distinct black head but the spots on their body are barely noticeable.  WBC spots or warts are more obvious. 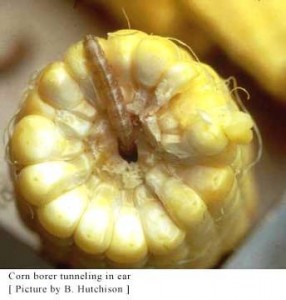 It is the older (larger) ECB instars that you will find into the ear.  Larvae mainly enter via the shank of the ear from the stalk of the plant.  They make their way through the shank to the ear tip before exiting the shank to graze the surface of the kernels.   Spots on their bodies are easier to see once they are this size. 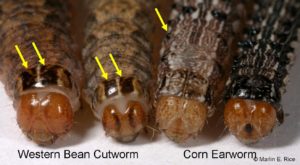 The only other larvae that you could come across and question if it is WBC is fall armyworm.  However these have darker heads with a white upside down Y along its face.  Also, their stripes along their body are quite easy to see.  They too have hairs sticking out like CEW have but CEW have a much lighter face than fall armyworm. 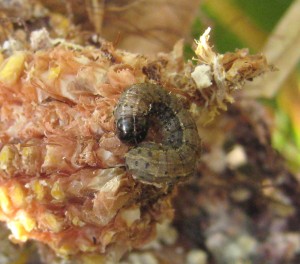