Sudden death syndrome (SDS) is most visible when the soybean crop enters the reproductive stages of development because most of the resources of the plant begin to shift from vegetative (leafs, stems, roots, etc) growth to producing and filling the pods. When this shift in resources occurs, the plant’s natural defense mechanisms are reduced (especially under stressed conditions) and allows the disease causing organism an opportunity to begin the infection process.

Sudden Death Syndrome is a root rot disease caused by a more virulent or aggressive strain of the common soil-borne fungal pathogen Fusarium solani. Although infection often occurs during the first 6 weeks after emergence, symptoms generally do not develop or become noticeable until the mid-pod reproductive stage of soybean development. Even though, the disease is most often found in field’s that are infested with soybean cyst nematode (SCN), SDS can occur without SCN being present. By penetrating the root, the nematode produces openings or wounds that allow the fungus responsible for sudden death syndrome easy access to the internal root tissue. The result is increased disease. At present the most effective method to manage sudden death syndrome is the use of tolerant varieties. Check with your seed company for variety tolerance ratings. 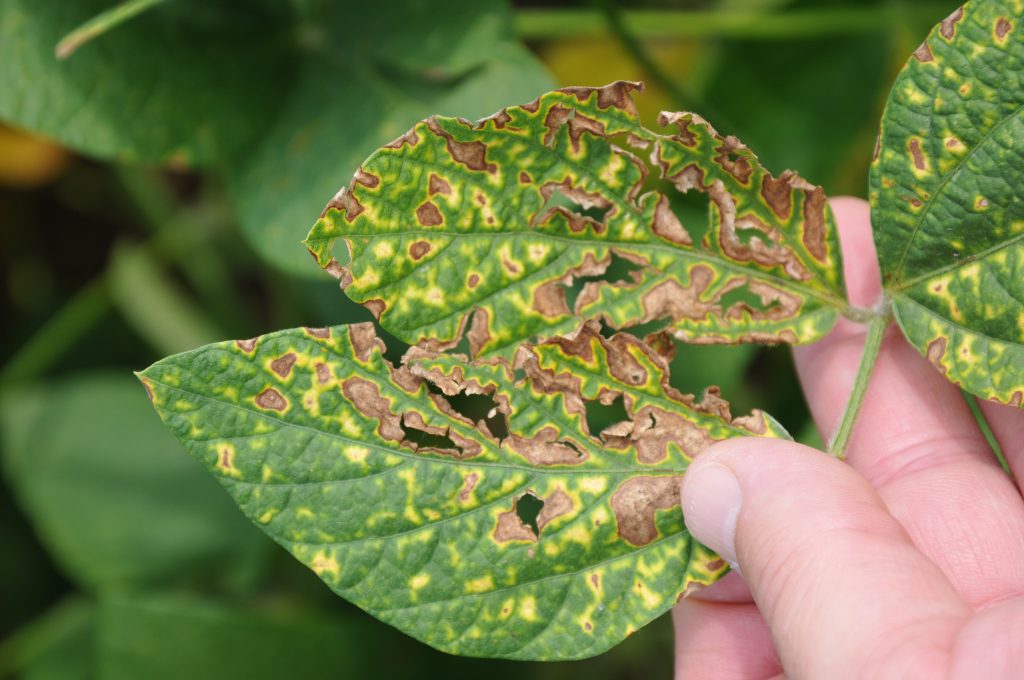 Besides typical root rot symptoms, SDS infected plants will begin to show distinct yellow speckling or spotting between the veins (interveinal chlorosis). As the disease progresses these areas become larger and in severe cases the entire area between the veins becomes brown (necrotic) and dry. The leaves curl from the outer margin. These brown areas eventually disintegrate (fall out) leaving only the veins on the leaf. All through this process the veins remain green. The next symptom is often premature defoliation and death of the plant. In most cases, the petioles (leaf stalks) on these dead plants remain attached to the stem.
Cutting the root and the stem will expose a light brown or gray discolourization of the cortex tissue in the tap root and the stem. This discolourization will extend from the roots up through the stem. Although the leaf symptoms may resemble brown stem rot, in sudden death infected plants the pith (centre) of the stem remains white whereas brown stem rot infected plants have a brown and disintegrated pith.