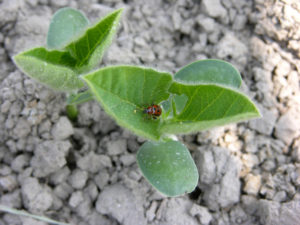 Now that some of you have been fortunate enough to get some corn in, I am hearing reports and seeing tweets that soybean planting has also started.   If there was a year to protect your soybeans with an insecticide seed treatment it is this year.  Bean leaf beetles are going to be awfully hungry waiting for the soybean crop to emerge this year.  And given the significant snow cover this past winter, their overwintering success is expected to have been better than average.  When the adults first come out of their overwintering sites they look for the first soybean fields to emerge to feed on.  Until then they feed in alfalfa fields (though not an economic concern).  If the bulk of the soys get in around the same time and emerge at once, these beetles are going to have a lot of fields to pick and choose from.

Bean leaf beetle populations in Ontario has been generally declining.  This could be due to the introduction of Cruiser insecticide seed treatment that helps control this initial overwintering population.  Research being conducted through U of Guelph and OMAFRA is indicating that we only have one generation of adults per year in the summer.  That means, if we knock down the overwintering population in early spring, there are fewer adults to lay eggs and give rise to that first and only generation in the summer.  HOWEVER, this same survey work found that fields particularly in southern Bruce and northern Huron experienced on average much high adult populations over the last three years, with some fields reaching thresholds in late summer.  Growers in this region are encouraged to use Cruiser seed treatment to help reduce their risk of later season populations impacting seed quality from pod feeding.