In the past several weeks increased attention has been given to the potential for ear moulds in the 2011 corn crop and the mycotoxins potentially associated with these moulds. These mycotoxins, particularly the vomitoxin (DON) can be disruptive when fed to livestock, especially hogs.

To increase our understanding of the situation OMAFRA Field Crop Staff conducted a survey of Ontario corn fields. In this survey corn fields were selected from across the province; in each corn field 4 sites were identified and at each site 5 consecutive ears were hand harvested. These 20 ears were then immediately dried and shelled. The resultant sample was thoroughly mixed and sample was taken to Agri-Food Labs in Guelph for vomitoxin (DON) analysis.

Of the 99 samples taken 75 of them recorded a DON level of less than 2.0 PPM; 12 were in the 2 to 4 PPM range; and 12 recorded DON levels greater than 4 PPM. The accompanying map shows the geographic distribution of the sampled fields and the DON level at each location.

The incidence of mould (and DON in the harvested grain) is quite widespread across the province. However, there are clearly areas of the province that will produce high quality corn with low DON levels. The map also does tend to indicate some areas where growers may need to be particularly diligent in assessing mould and vomitoxin concentrations.

It is important to note that this survey cannot capture all the factors that may influence the mould or vomitoxin in a given field. Hybrid differences, planting date effects, previous crops, localized weather patterns and insect or bird damage may all impact the level of mould in a given field and can explain why fields in close proximity have different mould development.
Moving Forward

Some producers with on-farm storage may need to segregate crop by DON levels to allow them to more easily match market demands.

Prior to harvest it is important for producers to scout fields for visible mould. To verify the presence of mycotoxins prior to harvest it is recommended that at least 10 ears (2 locations in the field x 5 consecutive ears) should be hand-shelled, thoroughly mixed and sent to a lab for testing. Once harvest has begun samples could be collected at the combine from several locations in the field. Current labs for testing grain samples are listed below.

A good strategy is to identify and rate the fields, hybrids and planting dates for the presence of ear mould and vomitoxin. Screens, cylinder and concave settings, and fans on combines should be set to create as clean a sample as possible, including the exclusion of smaller tip kernels if possible. 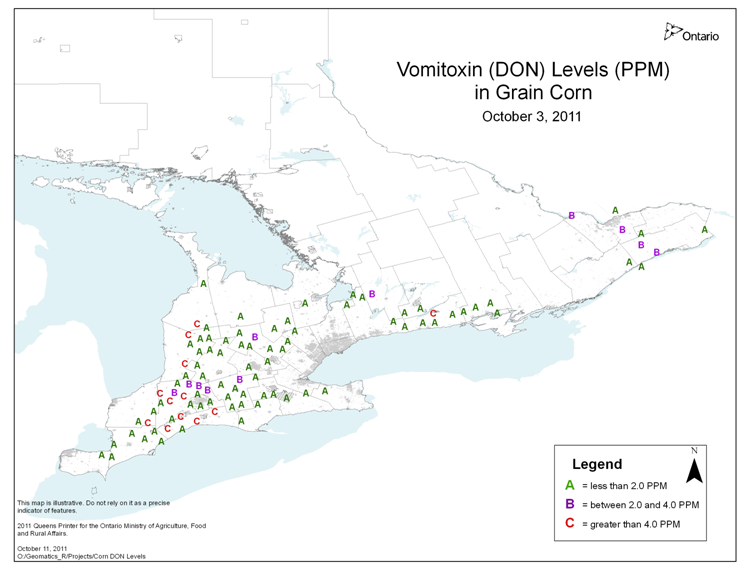