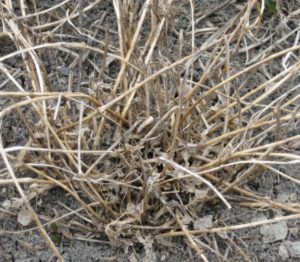 By early to mid April, the base of healthy alfalfa plants will have firm buds and numerous new green shoots with 2 to 5 inches (5 to 13 cm) of growth.  Damaged plants, on the other hand, will show no or minimal green-up.  Digging up plants and cutting the root open lengthwise is helpful in assessing the health of alfalfa plants.  Healthy roots will have a white or creamy colour inside, be firm, and the outer skin will resist pealing when scratched with your thumb nail.  Death or dying alfalfa plants will have a discoloured crown and root with a spongy texture and a rotting smell.

Observing early green growth from a distance in some cases is turning out to simply be a thick mat of dandelion.  Evaluate the productivity of your alfalfa stand by counting the number of plants per square foot.  To be productive, alfalfa stands should have a minimum of 10, 6 and 4 plants per square foot respectively for 1 year, 2 year or 3 year old (or older) stands.

New alfalfa fields with a few winterkilled spots can be patched-up with an alfalfa/grass mixture either using a no-till drill or by disking lightly and reseeding.  Because of the probability of autotoxicity, winter damaged alfalfa stands established in 2007 or earlier should not be reseeded with alfalfa.  If these older stands need to be thickened to remain productive, over-seed using either red clover (4-6 lbs/acre), white clover (2-4 lbs/acre), orchardgrass (4-6 lbs/acre), or perennial ryegrass (5-6 lbs/acre) depending on the anticipated future life of the stand.  When reseeded early, red clover, orchardgrass and perennial ryegrass will all produce vigorous seedlings and be able to compete with established alfalfa by second cut.  However, perennial ryegrass is not likely to survive the next winter.

If winterkill of alfalfa results in a mostly grassy field with less then 50% legumes, treat the field as a grass stand.  Applying nitrogen fertilizer to grassy stands normally produces higher forage yields than any attempt to interseed legumes into the stand.  It is critical to initiate a grass fertilization program early in the spring season.  Applying 70 lbs/acre of actual N fertilizer at green-up will stimulate grass development in the spring and maximize grass production and quality during the entire season.  In season, when ground moisture is adequate, apply an additional 45 lbs/acre of actual N fertilizer after each cutting, except after the final harvest.

Alfalfa stands with too few surviving plants per square foot should be rotated to a new crop, reseeded to a forage other than alfalfa to avoid autotoxicity in the case of stands older than one year old or possibly reseeded to alfalfa in the case of last year’s new seedings.