Synopsis:  Field work continues with many areas reporting dry conditions.  High winds yesterday moved a tremendous amount of soil.  Pictures below are from Bruce county in fields where there was no tillage equipment being operated at the time the pictures were taken.  This kind of wind erosion has not been seen in Ontario for many years: a stark reminder of the importance of leaving 30% crop residue on the soil surface.  The wind yesterday was so severe that even corn stalks were being blown off fields. 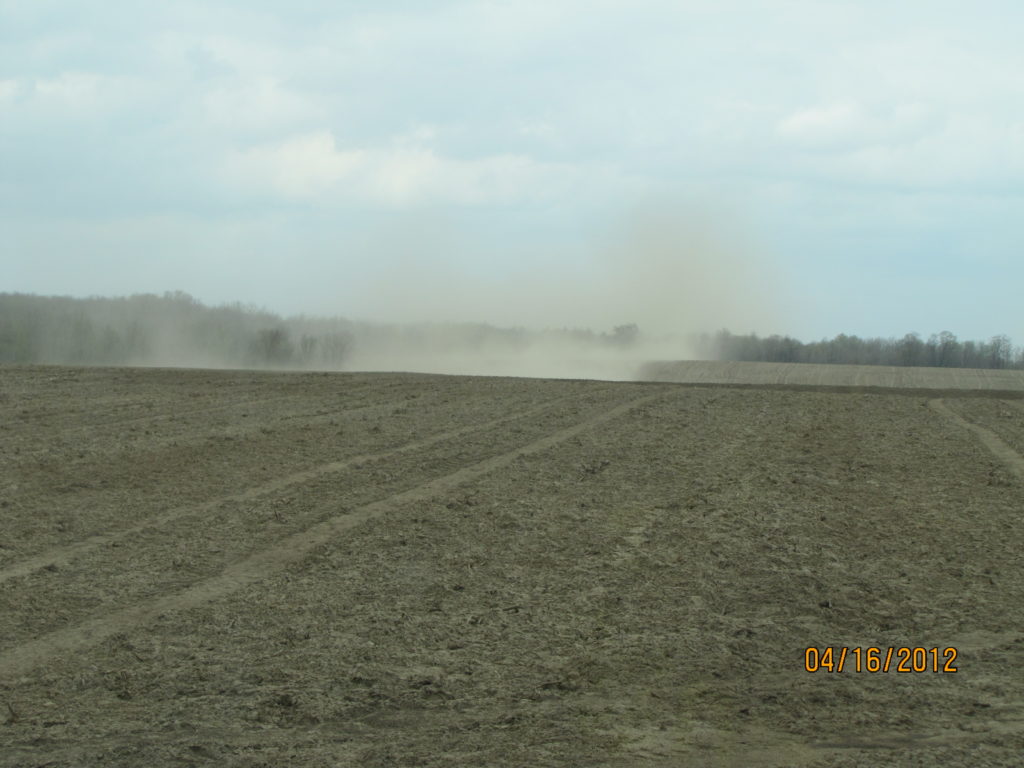 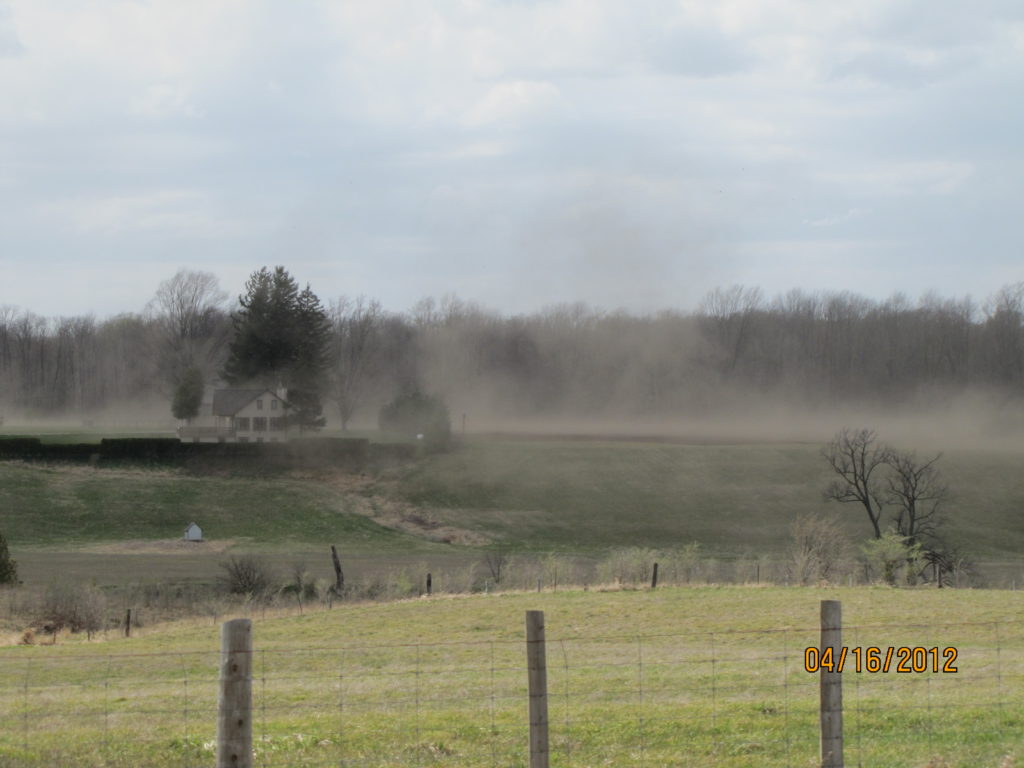 Another example of the "dust storms" caused by high winds . Photos by: Horst Bohner

It’s been a very early spring but plants have not been growing as rapidly as might be expected over the last two weeks, mostly due to cool nights and dry conditions.  Corn planted 2 weeks ago has growth but has a way to go to emerge.

Corn:  Corn planting ranges from 5-25% complete, depending on the region.  Hensall/Exeter/Woodstock areas are most advanced. Areas further north have just started. Some growers are finished planting corn: AMAZING for April 17th.  Growers are not paying any attention to soil temperatures: if the soil is fit, corn is being planted.  Field conditions are excellent.  Watch planting depth and tillage practices if dry conditions persist to maintain uniform germination and emergence.

Some growers have switched to longer season hybrids with this early planting window. It is possible to plant soybeans into most residual corn herbicides after 4 weeks.  Converge XT is one exception.  Corn seed supply is tight although there has been a switch to soybeans due to pricing on some acres.

Winter wheat:  The wheat has improved considerably with a shower and two warm days.  The wheat has been stressed over the last two weeks with constant frosts. 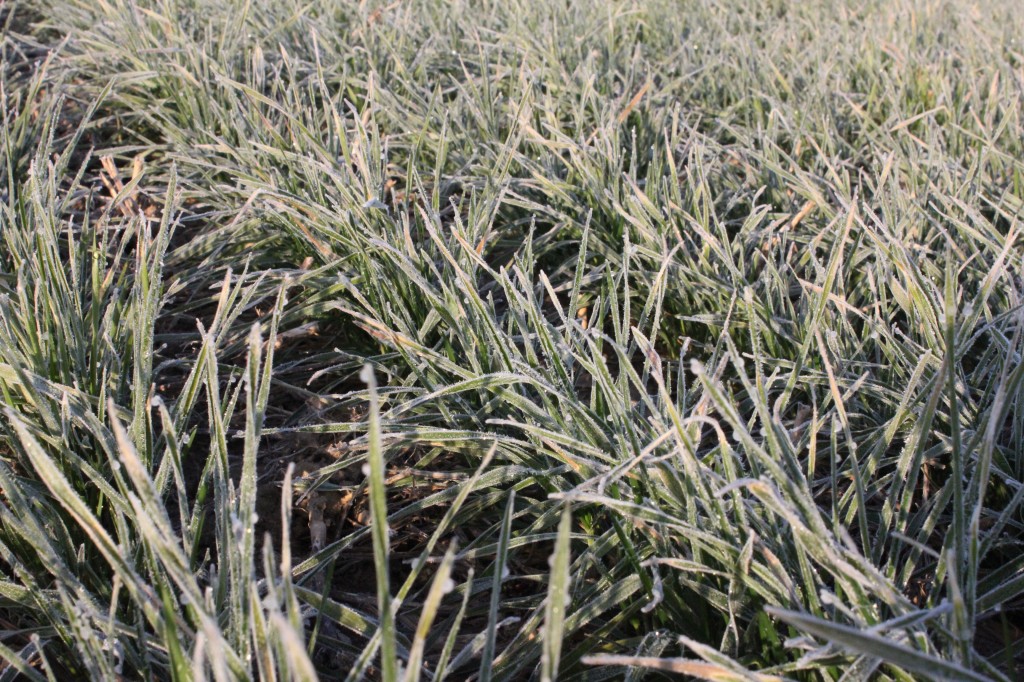 Wheat planted during the second half of October looks the worst right now.  There are isolated reports of wheat and winter barley killed by the frost.  Lethal temperature depends on stage of development.   http://soybean.uwex.edu/documents/WheatColdInjury.pdf

Visual damage from fertilizer applications are more apparent this year with the wheat under stress.  This damage results in essentially no yield loss.  Winter wheat damage reports into Agricorp are dropping off sharply.

Early fungicides:  Most fields are clean although some pycnidia are present on dead leaves.  Advanced fields are approaching growth stage 32, with most fields at GS 30. Early fungicide timing is coming on quickly.  If fungicides like Quilt, Twinline or Stratego are tankmixed with the herbicide more burn may result.  Dandelions have started to flower meaning they will be harder to kill, but cold nights have prevented growers from spraying.

Plant Growth Regulators:  With increased N rates, many growers are inquiring about PGR’s.  Cycocel (Chloromequat chloride) is the safest product and used most extensively inEurope.  Cost is high and supply is an issue this year. Over the three years of the SMART trials, rates of 0.5 l/ac seemed to be sufficient.  Timing is growth stage 30-31, or immediately when the growing point comes above the ground.  Night time temperatures should be above freezing. Ethrel is the other option at around $10/ac.  Timing and weather conditions at application are more critical, as Ethrel can have high phytotoxicity levels.  Timing is GS 37-45 (flag leaf).  If any awns or heads are showing emergence out of the flag leaf, it is too late for Ethrel.  Do not apply late as yield reductions can be significant.

Soybeans:  A few “experimental” fields have been seeded over last two weeks. There is some interest in soybean planting this week.  In 2010 the highest yielding soybeans were planting in mid April.  In 2011 the highest yielding beans were planted in late May.  Although the long termOntario data shows an average yield gain to early planting there are also increased risks.  Over the last 3 years the yield loss associated with delaying soybean planting has been 0.1 bu/ac/day.  In 2009 and 2010 it was 0.18 bu/ac/day.  Since these yield gains are relatively small it makes sense to wait for a more reasonable planting window for soybeans.  The end of this week is the very earliest soybeans should be planted in this area.  The majority of soybeans should be planted in late April or the first part of May for maximum yield potential.

Edible Beans:  White bean acreage is expected to be almost double what it was last year.  Large seeded beans are up by as much as 25%.  Prices remain attractive.

Crop Insurance:  Early planted fields will be dealt with on a case by case basis.  Good management practices must be employed.

Chair: Thanks to Martin Harry.  Chair for next meeting will be David Townsend.