Synopsis: DRY! Sugar beets planted shallow in late March still have not had enough rain for germination.  Wind erosion has been a major issue this spring with more tillage and dry soils.  Across this region 5 to 30% of the corn is planted, with only a few soybeans. A few acres are switching from corn to beans at current prices.  Little wheat has received a herbicide application with cold night temperatures.  Manganse deficiency is more prevalent this year (dry soils) and significant Mn has been applied.  Grain bin insect activity is estimated 2 months ahead of normal.  Lots of oddball weeds being found.

Soil Management: The recent sandstorms have been an ugly reminder of the need for reduced tillage and residue management.  Even clay soils have been blowing.  Growers have gone back to full tillage because of “full throttle farming” (Chad Anderson).  Maximum yield is the goal, it is not about costs.  The high crop prices currently available drive more tillage, along with the early spring and the growers desire to get something done.  Normally the planter chases the cultivator.  This year there can be up to a month in between, so even vertical tillage units are being pulled across the field 3 times, making them of little value in reducing erosion or maintaining residue cover.  Remember these key facts:

Cold Water Imbibition: Lots of discussion about soil temperatures and planting.  Soil temperatures have not been changing dramatically, even when very low nighttime temperatures are experienced.  Chilling injury has only been seen in the field when a significant amount of cold rain or snow falls within 24 hours of planting: enough cold moisture to chill soils and supercharge moisture reserves with cold water for rapid uptake.  Soil temperature should not slow planting, but a forecast of significant snow or cold rain should absolutely stop planting.  Thus Monday (yesterday) would have been a poor day to have the planter in the field, but much of last week should have been okay.

Wheat: The crop has responded well to slightly warmer temperatures.  The mistakes from last fall are really starting to show, especially starter fertilizer misses.  A few acres continue to be taken out as crop insurance inspects November acres and denies insurance if the stand is not 90% or above.  This is particularly true on heavy clay soils, with most November stands on good soils being accepted.  Weed control or early fungicides have been on hold with cold night temperatures: about 80% of fields remain to be sprayed.  Very few annual weeds are present in wheat fields to date, with cold temperature. Early N fields look better as of this date, with not enough rain to activate N on some later applied fields.  Lots of Mn deficiency has shown up, probably due to the dry soils, and many of these fields have been sparyed to correct the deficiency.  Cereal leaf beetle adults have been found in Simcoe county.  While well below threshold, this validates the need to scout for insects this year.

Double Crop Soybeans:  Lots of interest in double cropping soybeans after wheat, or even “relay cropping”, by flying soybean seed into standing wheat.  It takes 4 times as much water to germinate soybean seed as corn: the chances of a good stand with aerial seeding would be extremely remote (25% a best).  Planting after wheat is totally moisture dependent.  Last year with a wet August results were outstanding.  Without rain, yields are close to zero.  Remind growers of the risks….

Wild Weeds: Lots of oddball weeds being found.  The following weeds were brought in or discussed:

Cleavers have been reported in wheat in the Kent Bridge area: it was not thought to be an issue this far south yet, and can be a significant problem in winter wheat.  It is identified by the sticky (hairy) stems, and large size by this time of year.  Trophy works well to control it (Jim Hodgins).   The following video demonstrates control of cleavers with Trophy. 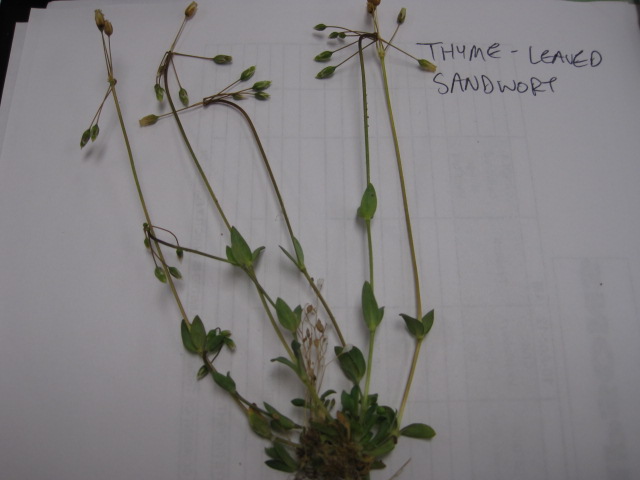 Insects: Black cutworm moth catches have been reported to the south.  Fields with weed pressure could be at high risk.  Flea beetle populations are at low levels in sugar beet fields.  Scout!  Grain bin insect activity has been reported at extremely high levels (2 months ahead) in stored grain.  Both Rusty Grain Beetle and Indian Meal Moth have been reported in samples received.  Monitor bins and fumigate where neccessary!

Other: A large increase in seed corn acreage this year.  Tomato acreage is flat, but yeild targets have been increased dramatically by some processors (45 tons/acre, normal yield 40 tons, last year yield 36 tons).