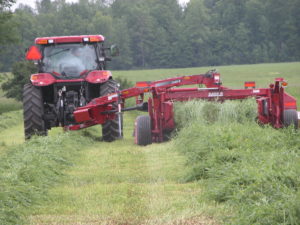 Farmers are full of optimism. Corn and soybean prices hit unprecedented highs in 2011. Although there has been some volatility in the markets, many farmers are responding to high anticipated prices by again increasing their intended acres of corn and soybeans. It’s no secret that there was a loss of forage acreage last year, but it tended to be some of the less productive hay fields. Many old hay fields are making way for tile drainage and renewed crop rotation.

Forages still have an important role as a profitable crop! There was a time lag behind grain and oilseed prices, but record high hay prices have resulted from low inventories. Livestock still needs to be fed. Beef prices are up and hay export demand to theUSis strong. Hay inventories are scarce for this time of year. Not too many years ago we saw lots of hay move at 5 – 6 cents/lb, but now there are reports of 9 – 12 cents. I keep hearing the comment, “where will all the hay come from?” Managed properly, hay can be very competitive with other cash crops. Here are a few things to consider as spring approaches.

Keep Forages In Your Rotation

Forage stands with greater than 50% legume content enable the grower to deduct 100 lbs/ac (110 kg/ha) of N from the following corn crop’s nitrogen requirements. That is currently equivalent to over $70/acre. Stands that are one-third to one-half legume get a N credit of 50 lb/ac (55 kg/ha).

Check For Alfalfa Winterkill This Spring

There are some winterkill risk factors coming together that are similar to 2009. It will be wise to check alfalfa fields early this spring for signs of winterkill or stand loss. With that nice harvest weather we had back in September, many farmers cut during the Critical Fall Harvest Period, increasing the risk. Late fall weather was very wet and warmer than normal. Alfalfa likes dry, cool conditions in late fall in order to winter harden properly and prepare for the winter. Poor winter hardening reduces root reserves and leaves plants more susceptible to damage from freezing. Saturated soils are always bad for alfalfa, and can even result in alfalfa heaving, similar to 2009. Also, there hasn’t been a lot of snow cover this winter to insulate crowns if a cold snap occurs.

There is nothing worse than having lots of cattle to feed and then being caught off guard by low forage yields due to winterkill. Walk alfalfa fields early this spring, especially those that are slow to green-up, and assess for plant health, including root and crown disease and heaving. Windshield assessments can be deceiving. Using a shovel, dig alfalfa roots, rinse them off in a pail, use a knife to cut open the root and crown. Watch for crown and root rots, brownish disclouration, spongy texture and lack of secondary roots and nodulation. Plant health can be more significant than plant density to a successful yield. As a guideline, the minimum number of healthy plants per square foot should be 12 – 20 for 1st year stands, 8 – 12 plants for 2nd year stands and 5 plants for a 3rd year or older stand. Refer to “Alfalfa Stand Assessment” (www.omafra.gov.on.ca/english/crops/facts/info_alfalfa_stand00.htm).

Nitrogen can dramatically increase the yield of grass stands, as well as forage protein levels.  Optimum rates depend on the cost of nitrogen, anticipated value of the hay, thickness of stand, moisture conditions, and whether it is pasture or hay.  Good grass stands with less than one-third legume, can generally benefit from at least 70 kg/ha (63 lbs/acre) of actual nitrogen (Refer to Table 3-6, OMAFRA Publication 811, Agronomy Guide). The first application of nitrogen for hay should be made at green-up, as soon as possible in the spring when soil conditions are suitable.

Don’t Put Off Building That Hay Storage You Need

There are tremendous losses in hay quality with poor storage, yet we still see hay outside on the ground, uncovered. This just doesn’t make any sense with today’s high hay prices and land costs! It is fairly easy to pencil out a hay storage, particularly the less expensive fabric covered structures ($8 – 12 / sq ft). Why spend 6 cents/lb to make hay, and then leave it to the exposed weather to turn it into something of low nutritional value that is unmarketable?

Opportunities to profitably market hay have never been better. Domestic and US demand for quality hay is strong. Quality reigns supreme. Premium prices will never be received for a poor quality product. Some skills in hay making are required. Produce the hay the customer wants to buy. Talk to hay dealers. For the most part marketable hay means:

For the horse market, it’s all about the colour green. That means the hay must be made under good drying conditions and stored inside and off the ground. Avoid any sun bleaching.

While small square bales usually receive the premium prices, there is a growing demand for large squares. Large squares are easier to store, transport and feed.  Large squares provide the capacity to make more hay when the weather allows. Making large round bales typically limits you to a local, lower priced market.

Use good hay making equipment and techniques. Watch moistures at baling and be prepared to use a hay preservative as necessary. Hay should be stored in a well ventilated storage to allow for moisture to continue to drop. The horse hay market is very tolerant of advanced maturity, but has zero tolerance for dust or mould. Refer to “Making and Marketing Horse Hay”   (www.omafra.gov.on.ca/english/crops/facts/makinghorsehay.htm).