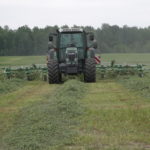 There are some “hot spots” with armyworm taking out hay fields, mostly south of the 401 in western Ontario (Niagara to Elgin County and surrounding areas) and up into Perth County. Grasses have been stripped of leaves with only stems and heads remaining. After fields are cut, armyworm feed on the windrow for a day or so and then move to neighbouring corn fields. Armyworm are now reported north to Bruce County, as well as central and eastern Ontario. Check your fields.

Alfalfa weevil feeding was widespread, but mostly cut rather than sprayed. Some spraying of 2nd-cut regrowth was warranted.

Early-June weather with more frequent rains in many areas has made making dry hay a bit trickier, but has also helped 2nd-cut regrowth. Forage maturity is now advanced, with considerable 1st-cut hay acreage still being harvested.

With limited forage inventories and higher hay prices, it is important to minimize harvest and storage losses.  Remove bales from the field as soon as possible. Store hay under cover and off the ground to prevent spoilage. Proper hay sheds are easier to justify with high hay prices.

Commercial propionic acid hay preservatives can be used to inhibit mould growth and heating while bales “sweat” and cure over time as moisture dissipates from the bales in storage. Use the correct application rate according to the percent moisture of the hay. Because large square bales are more dense, they require more acid than other bale types of similar moisture. Probe-type hand-held electronic moisture testers can be subject to variability and error. They should be calibrated to factors that can influence readings, such as forage species, bale type, acid and bale density. It is essential that hay storages have adequate ventilation to enable moisture to dissipate from bales. Tightly stacking bales should be avoided. Don’t store preservative treated and untreated dry hay in direct contact with each other as the moisture will migrate to the dry hay. https://fieldcropnews.com/?p=3655