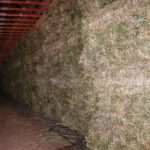 Trying to make dry hay between rainstorms can be frustrating. When haymaking periods without rain are short, we frequently get into a no-win situation. Either the hay isn’t dry enough to bale before the next rain and it gets rain-damaged, or it gets baled “tough” before it is quite dry enough and becomes mouldy, poor quality, dusty hay. Propionic acid can be used as a dry hay preservative to prevent mould when baling hay at moistures that would otherwise be too high.

Moulds greatly reduce the value of dry hay, particularly when targeting the “quality” horse hay or dairy hay markets. Moulds consume hay nutrients and cause dry matter losses, as well as producing toxins that are detrimental to animal health. Mouldy, dusty hay contains spores that can cause respiratory problems, particularly with horses. Mould growth can even result in hay fires from spontaneous combustion.

Propionic acid is a tool used to reduce the risk of mouldy hay, by inhibiting the growth of aerobic micro-organisms that can cause heating and moulding. Like other organic acids, propionate consists of carbon (C), hydrogen (H) and oxygen (O) (CH3CH2COOH) and is metabolized to carbon dioxide and water. Other organic acids, such as acetic (vinegar, CH3COOH) and citric acids are sometimes also included, but propionic acid is the most effective as a mould inhibitor.

The propionic acid inhibits mould growth while the bales “sweat’ and “cure”, drying down to safe moisture levels by dissipation and evaporation. Propionic acid is sprayed onto hay as it enters the baler. Equipment includes a baler-mounted applicator with a pump, nozzles, and tank. Do not confuse organic acid hay preservatives with enzyme, bacterial inoculant or nutritive additive products, which differ in modes-of-action and effectiveness.

Propionic acid products are registered and labelled by the Canadian Food Inspection Agency and have been commercially available as hay preservatives since the 1980’s. The original propionic acid products were unbuffered, which meant they were highly corrosive, very volatile, and difficult to work with. Products now marketed are buffered to a pH of 5.8 – 6.0 with ammonium hydroxide to form a salt in solution. To put it in perspective, this pH is about the same as rainwater, and far less acid than the vinegar that we put on our salad as dressing.

The newer buffered products are much less volatile and corrosive than the original unbuffered acid, making them much easier to use. The reduced volatility prolongs the activity in the bale, with less odour. Food grade dispersing agents and surfactants are included to enhance the absorption into the hay. Green colouring is also usually an ingredient. Products differ in concentration of propionic acid, so purchase decisions should be based on the price per tonne of hay at labelled application rates.

Safe To Feed To Livestock

Hay treated properly with buffered propionic and other organic acid products is safe to feed to livestock, including horses. Propionic and acetic acids are produced as an end product of digestion by bacteria in the rumen of cattle and sheep, and the caecum and colon of horses. The animal then uses these organic acids as a nutrient in the digestion process and metabolism. Naturally-occurring propionic acid is contained in human foods, such as butter and cheese. Propionate is also used as a preservative in human foods. Calcium propionate can often be seen on the list of ingredients for foods such as bread and baked goods, where it is included to prevent mould and increase shelf life. For the same reasons, it is sometimes included in livestock grain mixtures and pellet feeds, especially during the hot, humid conditions of summer.

A standing crop of forage is about 70 – 80% moisture. Initially the drying rate is quite rapid, but slows considerably when it gets to the low 20s. Getting the moisture down that last few percent before baling can take a lot of drying time.

Inevitably, there will be situations when the storm clouds are moving in, but the hay just isn’t quite ready to bale. Rain on almost-dry raked hay is much more damaging than rain on hay that has just been cut. Using propionic acid enables us to bale considerably earlier. This is especially true with poor, slow drying conditions, such as cloud cover, high relative humidity and low wind speed. With large square balers, the use of propionic acid is almost a necessity in Ontario, because the high humidity during the summer makes it difficult to get the hay moisture low enough at baling to avoid spoilage.

Read and follow product label directions. Enough active ingredient must be applied at various moisture levels for it to work properly. Different products have different concentrations of active ingredient, so application volumes will vary. Using very dilute products provides greater coverage, but requires more water to be applied on the hay you are trying to dry.

Optimum moisture levels for safe storage vary according to bale type and density. Guidelines for maximum storage moisture for dry hay without proper application of a propionic acid product are:

Specific acid application rates at various moisture levels are detailed on the product labels. At lower moisture levels, product costs are typically in the $7 – 14 per tonne range. If targeting quality hay, these costs are easily recoverable. Although some product labels indicate acid can be added to hay up to 35% moisture, this would be at a much higher risk of heating and spoilage, as well as significantly increasing the amount and cost of the product per tonne of hay, making this impractical. When using propionic acid, most hay producers seldom exceed 25% moisture.

An accurate measure of hay moisture is required to determine the proper application rate. Electronic moisture testers estimate percent moisture by measuring the resistance of electricity to move through a hay sample. The wetter the hay, the more electricity flows through. There are 2 basic types – hand-held probes and in-baler sensors. In-baler moisture sensors enable the operator to monitor moisture on-the-go from the tractor seat. Sensors can be located in-chamber on square balers, and on the sidewalls of large round balers. In-baler sensors have the advantage of giving multiple, continuous readings. Application rates can then be adjusted either manually or automatically according to the moisture.  In-baler moisture sensors with automatic applicators have become virtually standard on large square balers, and are also available for large round and small square balers.

Hand-held probe-type electronic moisture testers can be an excellent tool, but keep in mind that they cannot guarantee there are no errors in application rates. Hay can gain or lose 3-5 percentage points of moisture in an hour, and there can easily be 5 percentage points of variation within a windrow. Calibration accuracy is affected by bale density, whether it is grass or alfalfa, whether it is plant moisture or dew moisture, and whether acid has already been applied. Electronic moisture testers need to be calibrated to the conditions and well maintained. Beware that digital readings can give you a false sense of accuracy. Moisture testers should be used to supplement personal experience. Many hand-held moisture probes also can be used to measure temperature, which can be useful to determine if newly-made baled hay is heating.

Basic acid applicators, including a small tank, pump and nozzles, start for about $1,000. Probe-type hand-held moisture testers can be purchased for about $300. Of course, adding bigger tanks, in-line moisture sensors and computer controlled automatic flow regulators can add a few thousand more to the cost. These have become standard on most large square balers.

When Is Using Acid Most Economical?

There are 3 situations when propionic acid application to dry hay is most economical:

Baling at higher moisture also reduces mechanical harvest loss from leaf shattering and should increase forage quality. So, does it pay to use propionic acid all the time and bale at higher moistures to prevent leaf loss, or only strategically when the weather doesn’t co-operate? This will depend on the expected amount of raking and leaf loss, the final value of the hay product and the nutritional requirements of what it will be fed to. Routine acid application to reduce leaf loss would be more economical on alfalfa hay than on mixed or grass hay, and more beneficial when targeting higher value, well-stored, high quality hay.

There is a “learning curve” for consistent success when making “no rain, mould-free” hay. Although a useful and successful tool, the use of propionic acid will add to that learning curve. Errors can result in mouldy hay, or even worse, a dangerously heating mow.

Uniform application at the correct rate is key. Uneven windrows or fields with wet spots will not have uniform moisture. Rotary rakes typically provide a more uniform windrow than a wheel rake. Use a moisture tester to determine application rate, using the highest reading. If you use the average reading, you won’t get enough acid on much of the hay to prevent spoilage. Spraying should be as uniform as possible to ensure good coverage.

Hay can still heat or become mouldy and discoloured if inadequate acid is applied. Tightly stacked bales in a confined area don’t allow the bales to “sweat” and cure. It is important to have a well ventilated storage and some means of preventing bales from having direct contact with the ground, such as the use of pallets. Leave room between rows of bales in storage to enable air to circulate.  The acid can dissipate in 4-6 months, which may be before hay moisture is low enough if conditions are unfavourable. Extended periods of high humidity will extend the curing time. Don’t store treated and untreated dry hay in direct contact with each other as the moisture will migrate to the dry hay.

Although there is growing acceptance, some horse owners aren’t comfortable feeding propionic acid treated hay and prefer not to purchase or feed it. Propionic acid applied at higher rates may cause “browning” of the hay, making it less appealing in many horse hay markets.

There may initially be a characteristic volitile propionate odour (similar to vinegar) in the hay, until it has dissipates over time with the dry down of the baled hay in storage. Horse owners concerned about this odour should wait until the hay has dried down and is completely cured.

Propionic acid is most economical when used strategically to avoid rain-damage and mould with poor weather conditions. Propionic acid is also very effective with higher density bales, such as large squares, that need to be drier at baling to avoid mould growth. Management is required to ensure proper application and bale dry down in storage.