The butterfly enthusiasts had a good spring this year with the early arrival of the red admiral butterfly and large flights of other species. Unfortunately for us, that also meant some pests also arrived in great numbers. 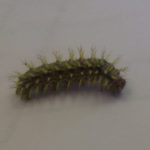 Speaking of pests has anyone seen this caterpillar in soybeans? This is the larval stage of the painted lady butterfly called a thistle caterpillar or sometimes the painted lady caterpillar.  They have a wide host range but usually like to feed on thistles and the odd soybean plant.  This year there has been quite a few reports about this insect showing up in soybean fields in numbers much higher than normal.  The larvae are easy to spot since they tend to use silk to bind leaves together to make a nice hiding place where they feed.  Usually you will find them on the top leaves of the soybeans plants. 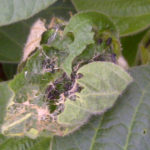 The painted lady butterfly flies north from the southern US to establish temporary spring/summer populations here in Ontario but does not survive the winter. Along with the true armyworm, there was a much larger than normal flight of these butterflies this spring which lead to higher than normal egg laying in soybeans. This is still a sporadic pest showing up in a few hot spots in various counties north of Lake Eire.

There are no registered insecticides in Ontario to control this insect but fortunately, damage tends to look a lot worse then it is. Reports from the field seem to indicate that loss of total plant leaf area is around 10% or less.

There have been other reports of defoliating insects such as the red headed flea beetle and Japanese beetle in soybeans.  Thresholds for defoliating insects are based on the amount of leaf feeding at certain growth stages of the plant.  Defoliation is often overestimated so make sure to take leaf samples from the middle of the canopy to get a good estimation of the actual damage being done.  Scouting techniques and thresholds for leaf feeding can be found in the following link to the Agronomy Guide: 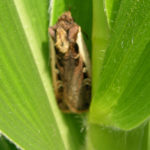 ur WBC trap counts continue to rise again this week and I think that we should be seeing peak moth flights in some areas of south western Ontario this week or next.  In south western Ontario, increasing trap catches have been found in Essex, Kent, Lampton, Elgin, Oxford, Huron, Wellington , Waterloo and Simcoe with the highest trap catches found in the Bothwell area. Central, eastern and norther Ontario are also seeing increasing trap catches in Nipissing, Northumberland and Prince Edward County. The numbers are not as high as in the south west but they are steadily going up. 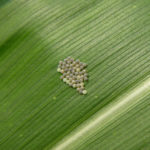 The scouts are finding more egg masses and 1stinstar larvae out in the field so we know egg laying is increasing.   For updates on WBC numbers in your area visit the Canadian Corn Pest Coalition website:  http://www.cornpest.ca

Other Pests on the Rise

The heat we have been experiencing has helped create high populations of potato leaf hopper in alfalfa with many fields over threshold especially in Niagara area and counties north of Lake Erie.  Please see the following link to an article by Joel Bagg for more information on PLH damage identification and management options http://t.co/N17egDch

Although we haven’t seen very many soybean aphids so far this year, the spider mite populations are starting to take off.  Over the last week I’ve been getting more and more reports about them. This pest is certainly one that could cause more problems then normal this year considering the hot dry conditions we have been experiencing.  Now is the time to have a look along the field edges for mite damage. Don’t confuse mite damage for drought stress; take a look at the underside of the leaves for mite colonies.  Spot sprays or perimeter sprays when thresholds are reached can help keep the mite numbers in check and prevent the mites from spreading into the rest of the field.