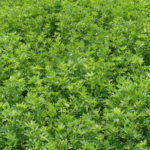 With reduced forage inventories, it will be very tempting to cut some alfalfa this fall. The decision and the immediate need for forage should be weighed against the increased risk of alfalfa winterkill. The Critical Fall Harvest Period for alfalfa is the 6-week rest period preceeding the average date of killing frost. Not cutting during this period allows alfalfa plants to re-grow and build up sufficient root reserves to survive the winter and grow more aggressively in the spring. When cut, early in the period the alfalfa will use the existing root reserves for regrowth, “emptying the tank”. Later in the period, the alfalfa uses photosynthesis to produce carbohydrates and stores them as root reserves, “refilling the tank”.

The Critical Fall Harvest Period begins as early as August 10th in northern Ontario, August 25 – 30th for eastern and central Ontario, and September 4th in the southwest. However, it is difficult to predict when that killing frost will actually occur.

Cutting in the middle of the Critical Period is higher risk than cutting at the beginning or end.  Even when winterkill does not occur, the extra yield harvested during the critical harvest period is typically offset by reduced 1st-cut yield the following spring.  Fields with older stands, a history of winterkill, low potassium soil tests, low pH, poor drainage, or insect and disease pressure are at increased risk of winterkill and are poor candidates for fall harvesting.  Aggressive cutting schedules with cutting intervals of less than 30 days between cuts increases the risk of winterkill, while intervals over 40 days (allowing flowering), reduces the risk. We frequently see fields with disappointing 1st-cut yields where 4th-cut was taken the preceeding fall.

Little root reserves will be depleted by regrowth, but lack of stubble to hold snow to insulate the alfalfa crowns against damage during cold weather may be a problem. Increasing cutting height to 6 inches of stubble will help. Sufficient top growth is required to hold snow that helps insulate overwintering crowns against cold temperature damage and frost heaving. Stubble will also protrude through winter ice sheeting, should that occur. After a killing frost, alfalfa feed value will decline, as leaf loss occurs and rain leaches nutrients quickly.

Corn has matured significantly ahead of normal. It is critical to harvest corn silage at the correct moisture for optimal silage fermentation and animal performance. Walk your fields, monitor whole plant moistures, and be ready to fill silo. Silage moistures that are too low cause poor packing and fermentation which result in higher dry matter losses, heating and spoilage, poor bunk life, and lower starch digestibility. Kernel processors can help compensate to some extent. Harvesting at moisture levels above 70% will result in lower yield, seepage and a very undesirable clostridia fermentation. This silage will have high levels of bad smelling butyric acid, high dry matter losses, seepage, as poor nutrient quality, palatability and intake.

The best silage fermentation and livestock performance occurs when whole plant moisture is 65 to 70%. This corresponds well to horizontal and bag silos, but silage may have to be drier in tower silos to prevent seepage. Watch for variability between fields and within fields. Recommended moisture levels are 65 – 70% for horizontal, 62 – 68% for bag, and 62 – 67% for most upright silos.

Whole plant silage moisture is difficult to accurately estimate. The traditional one-half to two-thirds milk line guideline is limited by considerable variation due to dry weather and hybrid differences. Chop a sample and measure the moisture content with a microwave, commercially available tester (eg. Koster) or by laboratory analysis. Microwaves and on-farm testers typically under-estimate moistures by up to 3%. Experience shows that in a typical year corn silage dries about 0.5 % moisture per day, but the rate will be higher in dry conditions. This procedure takes a little time, but is worthwhile when you consider the impact correct moisture will have on forage quality and animal performance for the whole year.