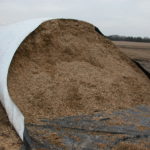 Corn silage is a useful late-season forage option for livestock producers, particularly in years when hay and haylage inventories are limited. Rainfall has been extremely variable across Ontario this year, with some extremely dry areas and other areas closer to normal.  Summer thunderstorm activity even created extreme variations between concession roads. As a result the corn crop is also quite variable in both yield potential and the corn-stover ratio. In some areas with more timely summer rains, the corn crop is close to normal. In other extremely dry areas, much of the corn has a lower grain yield potential. In many cases this corn can be salvaged as much needed silage. At the same time, grain corn prices have increased to record highs. Of course this begs the question, “what is this corn silage worth?” The determination of the price of corn silage must be tailored to each individual situation.

Local supply and demand and negotiation between buyer and seller ultimately determines the price. With current grain corn and hay prices, corn silage still looks fairly attractive as an alternate forage. It is important that you make your own assumptions for your situation and calculate your own costs, in order to determine what you feel is an acceptable price. Then negotiate the best you can.

Approximately 83% of the corn acres in Ontario are planted with the intention of combining them as grain. Many of these corn acres are usually readily available for harvest as silage if needed. This gives the corn growing parts of the province a good late-season option when forage inventories get tight. Dairy producers can often increase the percentage of corn silage in the ration if necessary. This year, hay inventories are reduced and many farmers are looking for more forage to meet their needs. In some of the extremely dry areas, salvaging damaged corn crops for silage is the best option. Silage piles and silage bags provide flexible storage options, but some planning is required.

One method to determine the price of corn silage is to compare it to the value of grain corn to determine a minimum price. As a seller, you would not want to sell it as corn silage for less than you could net selling it as grain. Buyers feeding corn silage to livestock might be prepared to pay more, depending on what alternate feedstuffs are available. From a livestock nutrient point of view, corn silage may be worth more in the ration than is reflected in the market. At current grain corn and hay prices, corn silage still looks very competitive as a forage feedstuff.

These calculated corn silage values are not necessarily the cost of production, or the feed nutrient values, but reflect the market value of the alternate harvesting options (ie. harvesting as grain corn).

As an example, look at the various fields in Table 1. Higher yielding corn fields contain a higher proportion of grain relative to stover, and are usually greater in digestible energy. Example #1 has good yield, while Example #2 yields about two-thirds of that. Example #3 has been severely stressed by lack of moisture. A corn crop that is almost earless is difficult to value as silage based on grain content. (Refer to “Salvaging A Poor Corn Crop below.)

The expected grain value should be adjusted for custom combining, drying, and trucking charges to give a value of the crop in the field. The additional soil nutrient value (P and K) removed in the non-grain portion of the silage (stover) is significant, at about $3.50 per tonne of corn silage harvested (@ 65% moisture). Calculating the cost per lb or tonne of dry matter can help put corn silage in perspective relative to what the market is willing to pay for hay. If the seller is going to fill the silo for the buyer, custom silo filling charges should also be added. Storage costs, fermentation shrink and spoilage losses are not included. Refer to:

Because of higher grain corn prices, corn silage price calculations have almost doubled from a couple of years ago and tripled from a few years before that. Percent moisture will have a significant impact on price, so it is important to sample and get reliable moisture numbers. Nobody wants to pay for water when they think they are buying feed. An error of only 5% moisture (ie. estimating 65% instead of 70%) is equivalent to almost $8 per tonne.

Farmers attempting to salvage poor corn fields damaged by lack of rain by harvesting them as silage should be aware of some of the harvesting and nutrition implications. For information on harvest and storage of corn silage, refer to:

Tremendous variation can occur in drought-stressed corn fields. Some fields will have short plant height with more normal ears, so the ratio of grain to stover may be reasonably normal. Yields will be reduced, but forage quality may be fairly normal. Other fields could be more normal in height but have very small ears. These fields will have a very low ratio of grain to stover, much lower than the “thumb rule” 7.7 bushels grain per tonne (7.0 bu/ton) of silage at 65% moisture for a good crop.

Corn without ears or very small ears has little or no value as a grain crop, so it is difficult to value it on a grain basis. The price of alternate feeds such as standing hay is a more useful consideration in areas that are very short of forage inventory. For example, grassy standing hay valued at 4¢/lb of dry hay equivalent could be roughly equivalent to earless corn silage in the field at about $35 / tonne (at 65% moisture).  Standing hay at 3¢/lb is equivalent to about $26 / tonne. These values are likely greater than “almost earless” corn silage valued on a grain basis, and likely better reflect the market value. The replacement value of the P and K removed in this corn silage is about 1.2¢/lb ($26.63 / tonne) of dry matter, or $9.32/ tonne silage (at 65% moisture). If the fields are fenced, there is also an opportunity to graze these crops.

The local supply and demand of corn silage and alternate forages will influence the price. The availability of silage storage and the economics of feeding are considerations. Sellers with Crop Insurance should contact Agricorp (1-888-247-4999) before harvest to determine how selling corn as silage will impact a claim. Good yield and quality estimates are important and should take into consideration actual weights and percent moisture. The removal of the stover organic matter could be considered as well.

This example is meant to be a general guide for farmers and should be used as a starting point in negotiations between the buyer and seller. Make your own assumptions and do the calculations specific to your situation.