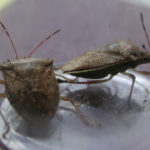 Stink bugs have been showing up in soybean fields in south western Ontario in noticeable numbers over the past 2 weeks and reports of stink bug numbers from Ohio are showing a similar trend. We may see more stink bug in the soybean crop  this year then in previous years so it’s time to be on the look out for them. Remember, only IP and seed beans are seriously affected by stink bug feeding as damage caused to the seed affects seed quality.

The two main stink bugs that are pests in soybeans are the green stink bug (Nezara viridula) and the brown stink bug (Euschistus servus). At the R5 to mid R6 stage, both adult and nymphs cause damage by piercing and injecting digestive enzymes into the seed causing the seed to dimple or shrivel. There are often no obvious feeding scars on the outside of the pod making damage difficult to asses. Once soybeans reach the late R6 stage then danger from stink bug feeding has passed. 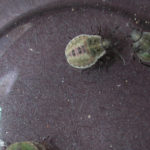 Scouting Techniques: Use the drop-cloth technique in row plantings, and the sweep-net technique for narrow row and drilled beans. The drop-cloth method involves using a 90 cm (36 in.) long piece of white cloth positioned on the ground between two rows of soybeans. Vigorously shake the plants over the cloth in each of the two rows. Count the number of adults and nymphs and divide the number by 6 to obtain the average number of stink bugs in a 30-cm (1-ft.) row. Repeat this in at least four more areas of the field. Be careful not to disturb the plants prior to shaking them on the cloth.

Action Threshold: Control may be warranted in IP food grade and seed soybeans if an average of one stink bug per 30 cm (1 ft) of row or 0.2 bugs per sweep is found during the late R5-R6 stages.