The University of Guelph Pest Diagnostic Clinic confirmed this week Soybean Vein Necrosis Virus (SVNV) infection in soybean plants OMAFRA collected in Kent and Elgin counties last week.  SVNV is a new soybean disease which was first identified in Tennessee in 2008.  Since then the disease has been reported in many other States and most recently in bordering Great Lake States such as Ohio, New York, Pennsylvania and Michigan.

The disease has most likely been present in soybeans for many years but could have gone misdiagnosed since symptoms look very similar to Cercospora leaf blight (Cercospora kikuchii), scald (sunburn), plant stress response and others.  Symptoms often begin as chlorotic (light green to yellow) patches near the main veins which may enlarge eventually becoming necrotic (brown) areas.  The veins may appear clear, yellow or dark brown in colour.  The browning of the veins may be especially noticeable on the lower leaf surface but this may not always occur.

What is SVNV?  The virus belongs to the Tospovirus group which includes Tomato Spotted Wilt Virus which are vectored by thrips and possible other insects.  The hot and mostly dry conditions this year were good for not only spider mites but thrips as well.  There is not a lot known about SVNV and many questions need to be answered before we get a better understanding of the potential impact of this new disease in Ontario. 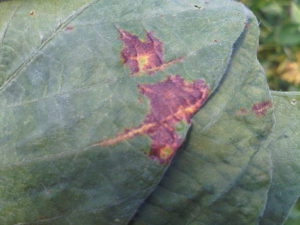