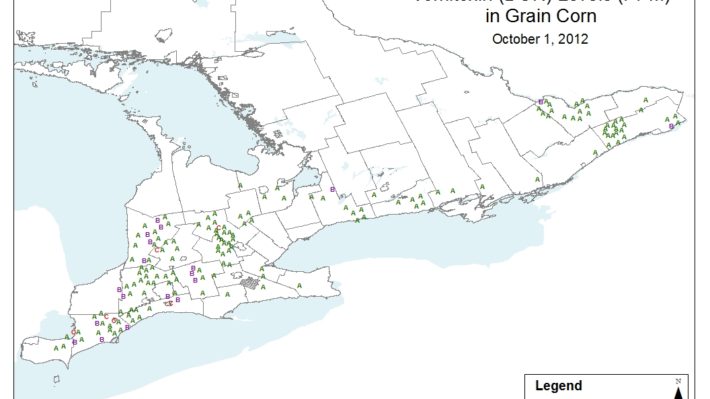 The annual corn ear mould and vomitoxin survey by the OMAFRA Field Crops team indicates that the 2012 Ontario corn crop is distinctly low in ear moulds and vomitoxin. However, stakeholders are reminded that individual field conditions (environmental, hybrid, tillage, rotation, etc.) are important in ear mould and mycotoxin development.  Growers should scout for visual moulds and test for vomitoxin as warranted.

A total of 171 samples were collected from September 18 to 25 from corn fields across the province.   In each field, 2 random areas were selected and in each area 10 consecutive ears were hand harvested and bagged. In fields with several hybrids, representative samples were taken again from two areas for each hybrid (maximum of 4 hybrids per field).  The 20 ear samples were then immediately dried and shelled.  The resultant sample was thoroughly mixed and a sub-sample was provided to A& L Canada Laboratories in London for vomitoxin (DON) and aflatoxin analysis.

Of the 171 samples collected: A map of southern Ontario depicting the levels of vomitoxin (DON, PPM) found in 171 grain corn samples collected from September 18 to 25, 2012.

In comparison, the 2011 OMAFRA survey showed 23 % of samples had DON levels of 2.0 PPM or greater. Clearly the incidence of Gibberella/Fusarium ear moulds and DON is minimal this year; perhaps the lowest levels that we have encountered in the past decade.  Samples that had slightly elevated DON levels were generally in the southwest part of the province but no specific area could be identified as having a concern for elevated DON.

The concern in the United States surrounding another mycotoxin, called “aflatoxin” has not gone unnoticed in Ontario.  In corn, aflatoxin is produced by the fungal pathogen Aspergillus flavus which causes Aspergillus ear rot.   The hot dry conditions across much of the corn growing area of North America have been favourable for Aspergillus ear rot and unfortunately aflatoxin production as well.  In Ontario, environmental conditions are often more favourable for Gibberella, Fusarium, Diplodia and other ear rots rather then Aspergillus.  Although Aspergillus ear rot and aflatoxin production is rare in Ontario corn, OMAFRA determined due to the concern and environmental conditions this year to test for aflatoxin as well.  A subset of 26 samples from the total 171 collected was tested for aflatoxin.  All 26 samples (100%) were found to have no detectable aflatoxin.

Appreciation is extended to the Grain Farmers of Ontario and A&L Canada Laboratories for their support of this survey and analysis. 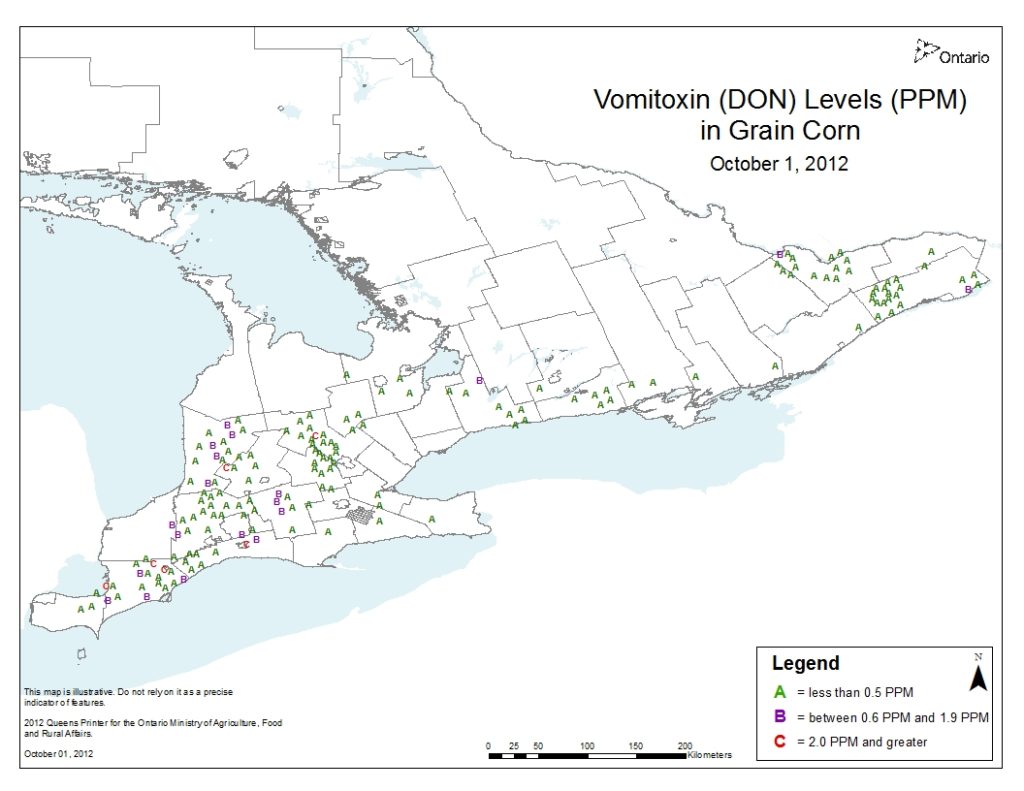