Forage production was extremely challenging in 2012, with low yields and tight forage inventories. Significant reductions in forage acres occurred from 2006 to 2011, of 500,000 acres of hay and 250,000 acres of pasture. Inventories of hay carried over in the spring were historically low.  Export demand for quality hay to the US is very strong. Hay prices peaked at unprecedented highs during the summer, before softening slightly.

Some alfalfa winterkill occurred across the province, but especially eastern Ontario. Heavier soils with poor drainage, older stands and fall harvested fields were the hardest hit. With wet, saturated soils during late-fall of 2011, conditions for winter hardening were poor. Fields harvested with aggressive cutting schedules that include a 4th cut, appear to be at higher risk of winterkill and reduced stand vigour and yield the following year. Dandelions were quite visible in weaker, lower yielding stands.  Some of these stands have low fertility, poor drainage or disease issues, but many are simply old and need to be rotated. Dairy farmers that use aggressive cutting schedules to improve nutrient quality have shortened their rotation schedules to compensate for reduced stand life. A 10 – 15% yield benefit to the following corn crop, in addition to the nitrogen credit, make this strategy very economical.

Alfalfa broke dormancy exceptionally early in March. In many areas of the south­-west, advanced growth was frost damaged March 30th. After plants recovered from new crown and axillary buds, many were damaged again by frost in late-April. This resulted in reduced yield and variability in maturity.

A dry spring provided an opportunity for new seedings to be planted early. However, with insufficient rainfall establishment was variable, especially where packing for good seed-to-soil contact was insufficient. This year’s summer seedings completed during optimum seeding dates in August were rainfall dependant, but appear to have been successful where moisture was adequate.

Alfalfa weevil damage was reported in many areas of the province, especially in the south-west. Harvest was the best management option and few 1st-cut acres were sprayed. However, there were many reports where infestations were so high that alfalfa weevil feeding of 2nd-cut regrowth was significant enough to warrant spraying. Grubs, including June beetles and European chafers caused significant damage to pastures and grass hay fields in lighter soil areas, especially in central Ontario. Alfalfa snout beetle continues to be reported in small pockets in eastern Ontario. There were some “hot spots” of armyworm taking out entire hay fields, mostly in western Ontario (Lake Erie to Bruce County). If left unsprayed, armyworm stripped grasses of leaves with only stems and heads remaining.

Potato leafhopper levels (PLH) were above threshold levels across the province, not just the typically PLH-prone counties bordering Lake Erie and Niagara. PLH damage went largely unrecognized and untreated with the lack of growth and stunting blamed on the dry weather. PLH feeding causes leaf damage, reduced growth and root development, and stunting.  Left untreated, PLH feeding on alfalfa from June to mid-August often resulted in significant yield losses of about 1 tonne per acre.  New seedings were particularly hard hit, in some cases nearly destroying them. Reduced yield and vigour in severely damaged stands carries over to future years, and can result in increased winterkill.

First-cut yields were quite variable, but frequently reported at 50 – 75% of normal. A major cause was the lack of rainfall in March, April and May. Other agronomic challenges also reduced yields, including winterkill, frost damage, alfalfa weevil, and armyworm. First-cut “dairy quality” alfalfa haylage started about May 21st in much of southern Ontario.  Timely harvest enabled forage quality analysis fairly close to the benchmark 20 – 30 – 40 targets.  Weather for making quality first-cut hay without rain-damage were generally good in June.  Second and third-cut yields were extremely variable, depending on rainfall, but were typically well below average or non-existent in many areas.  Where fourth-cuts were taken, yield and quality were generally very good.

There was significant harvest during the Critical Fall Harvest Period, as farmers need for feed outweighed their increased risk to stand health.  This may increase the risk of alfalfa winterkill.  Closely monitor these fields in the spring to determine if remedial action is required.

With reduced carry-over inventories of quality forage, there was significant use of cereals and cereal-pea mixtures as companion crops. Also, a significant amount of emergency annuals were seeded in late-summer and harvested as haylage or baleage in the fall in an effort to double crop and increase feed inventories at a low cost. These included cereals (mostly oats, but also some barley and triticale) and cereal-pea mixtures, and also warm season annuals such as sorghums, sorghum-sudan and millets. This was a successful strategy for many farmers, with good yields and excellent quality when harvested at the appropriate maturity and moisture. There were some minor issues with high moistures with late-harvests and higher than expected nitrate levels. There were also significant autumn seedings of fall rye, which will be harvested as haylage in May. 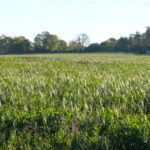