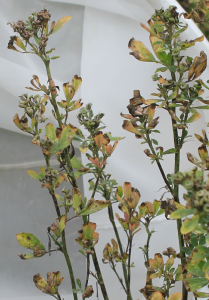 Last summer, potato leafhopper (PLH) certainly lived up to its reputation as the most damaging alfalfa insect pest in Ontario.  In many parts of the province, PLH feeding resulted in yield loses of over 1 tonne of alfalfa per acre or roughly a loss of $200/acre.  While PLH damage was far greater than normal, it went largely undetected, the lack of growth and stunting being blamed on the hot and dry weather. (Figure 1)  While the lack of moisture did impact the crop, the bulk of the damage was the result of leafhopper feeding from June to mid August. 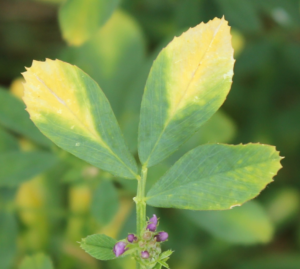 The visual damage of PLH is not as dramatic as the leaf shredding caused by alfalfa weevil.  Rather, the insect feeds by inserting its mouth piece at the tip of the leaf and sucking plant juices from the alfalfa plant.  While sucking the plant sap, PLH injects a toxin into the plant, which interferes with transportation of fluids and nutrients in the leaves.  The result is the characteristic “hopperburn”, which starts as a wedge-shaped “V” yellowish pattern at the leaf tips. (Figure 2)

Loss of Yield and Quality 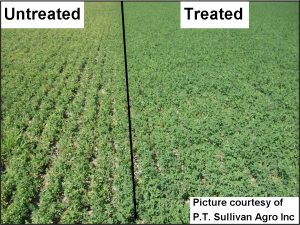 PLH feeding causes reduced stem elongation, reduced root development, leaf cupping and stunting.  The amount of damage caused by PLH is largely dependent on the timing and level of the infestation.  In 2012, PLH arrived inOntarioin late May, with the population building rapidly until early August and then crashing by mid-August.  By late July, it was not unusual to find alfalfa fields with PLH populations 50 times above the control action threshold.  When left untreated, high PLH populations reduced alfalfa yields by more than 1 tonnes per acre, or approximately the equivalent of a mid summer alfalfa cut. (Figure 3)  PLH feeding also reduced the crude protein level of the alfalfa harvested.

New seedings were particularly hard hit this year, in some cases nearly destroying the new stands. Research indicates that reduced yield and vigour in severely damaged stands carries over to future years, and can result in increased risk of winterkill. 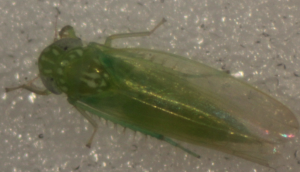 PLH do not overwinter inOntario, but migrate annually from theGulf Statescarried on weather-front air currents. (Figure 4)  As such, this past season’s high infestation level has no bearing on next year’s infestation levels.

Economic losses from leafhoppers occur long before plant symptoms become visible.  The only way to detect the presence of large leafhopper populations before the damage occurs is to scout.  It is particularly important to monitor new seedings.  Scouting with a sweep net starting in mid June will help determine the level of PLH infestation and whether early harvest or spraying is needed.  Cost of treatment is in the $15 to $20 per acre range ($6 to $10 for the insecticide, $10 to $12 for application).  For more information on PLH resistant alfalfa varieties, scouting, action thresholds and insecticide options visit: http://bit.ly/N8GaMp .