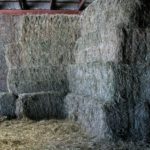 Orchardgrass can be very productive, particularly in pastures and hay fields with aggressive cutting schedules. It is a very fast growing, perennial, cool-season grass. However, because it heads so very early in the spring and then declines quickly in digestible energy and protein, it has not been as widely used for stored forage in Ontario compared to other forage grasses. This is changing more recently, as plant breeders are researching and developing newer orchardgrass varieties with later maturity.

An Alternative To Timothy?

Timothy has always been the most popular grass in Ontario because of its late maturity, ability to mix with alfalfa and go through the small seed box, ease of establishment, and lack of aggressiveness with alfalfa in a forage mixture. However, timothy is shallow-rooted and susceptible to hot, dry weather. While it grows well in the spring, it has relatively poor regrowth and typically contributes little to yield in 2nd and 3rd cuts. This has resulted in many farmers considering at least partially substituting other grasses in their hay and haylage mixtures.

Orchardgrass is a bunch-type grass that has profuse tiller formation at the base of the plant. This tiller formation begins early in the spring and continues through the growing season. It is this profuse tillering ability and rapid regrowth that make orchardgrass a great pasture species, especially when rotationally grazed or clipped to maintain quality. When orchardgrass seedheads are removed by cutting or grazing, the new growth is nearly all leaves.

Although it is fairly easy to establish, orchardgrass can have some winterhardiness and persistence issues. In older stands, orchardgrass tends to appear as large clumps scattered throughout the field or paddock.

In hay and haylage mixtures, orchardgrass can sometimes be too aggressive, and can quickly increase in proportion every year at the expense of the alfalfa. Relative to timothy, a small percentage of orchardgrass in the seed mix can result in a more significant proportion of the harvested forage.

Whereas early growth and maturity is desirable in pasture situations, the early heading and rapid decline in nutrient quality make orchardgrass more difficult to manage in a hay and haylage situations. Table 1 shows the orchardgrass varieties listed in the 2013 Ontario Forage Crop Variety Performance brochure. (www.plant.uoguelph.ca/performance_recommendations/ofcc/pdf/ofcc_performance.pdf)  Yield index composites are available for both northern and southern Ontario. The heading dates at Elora and the distributors are also listed.

Orchardgrass varieties are tested in either an early or late harvesting system. There is a tremendous range in heading dates, from May 16th to June 11th  from the earliest to the latest variety (26 days). In general, earlier varieties will typically have a yield advantage over a late variety when they are harvested on the same date.

There are various breeding efforts in Canada and the northern US to improve late maturing orchardgrass varieties. The variety Dividend VL was developed in Ontario by Dr Steve Bowley at the University of Guelph with funding from the Ontario Forage Council.  While Dividend VL has a southern Ontario yield index of 87% and a northern Ontario index of 100 compared to the check variety OKAY, it headed 10 days later. It is noteworthy that most of the “late” orchardgrass varieties headed only a few days earlier than the “late” timothy varieties listed in the brochure, and Dividend VL actually  headed later.