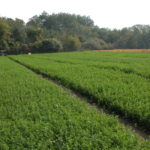 While seed germination and plant density are reduced by alfalfa autotoxicity, root growth is even more severe. Roots are swollen, curled, discoloured, and lack root hairs. Mature plants appear to be more “branch-rooted”, rather than “tap-rooted”. The effects on root growth can significantly impact yields for the life of the stand.

Responses to alfalfa autotoxicity are variable, depending on many factors. The water soluble autotoxicity chemicals (possibly medicarpin) are more concentrated in leaves and stems than in the roots. Removing topgrowth before plowing, and tillage can help reduce the autotoxicity effect. Higher temperatures break down the toxic compound more rapidly, while rains can move them from the root zone. Autoxicity may initially be more severe on light soils, but lasts longer on heavier soils.

The concept of alfalfa autotoxicity is generally accepted. However, there is some disagreement on what minimum period of time is required between killing the old stand (either by plowing or glyphosate application) and reseeding. Time is required for the toxins to degrade or move out of the root zone. Research has shown that while an interval of only 2 or 3 weeks is required to eliminate the adverse effects on germination and plants per square foot, the potential effects on root development and long term forage yields can persist much longer.

Impacts on root growth have significant effects on yield. Studies have shown that yields are reduced when alfalfa is seeded after alfalfa, regardless of the waiting period. This yield reduction appears to persist every year for the life of the stand. Stands affected by autotoxicity appear to regrow slower after each cutting. Even when alfalfa was killed in the fall and reseeded in the spring, yields were reduced when compared to alfalfa following corn. At the farm level, yield reductions from autotoxicity can be more difficult to recognize than plant density, and are often attributed to other causes. For maximum yield, if the alfalfa is two or more years old, an intervening year of an alternate crop is required before reseeding to alfalfa.

It is not recommended that interseeding be done to thicken an established alfalfa stand, as this is rarely successful. New seedlings often germinate, look acceptable initially, and then die out over the summer. Research shows the area of autotoxicity influence is a 16 inch radius from established plants. This means that a field with plant density of less than 0.2 plants per square foot (almost nonexistent) would be required before interseeding could avoid autotoxicity. A stand with greater than 1.3 plants per square foot will have excessive zone overlapping and a high risk of failure. In an emergency situation, thin spots can be interseeded with red clover instead. Of course, interseeding a stand that is less than one year old is acceptable, because there is no alfalfa autotoxicity effect.