Cereals
Winter wheat survival is quite variable across the region. Survival is better in western Ontario. As a guideline, a good stand is 12 to 18 plants per foot of row. See Agronomy Guide, Table 4-8 Determining Yield Potential for Various Plant Stand Counts. 7 plants per foot of row, evenly distributed has a 90% yield potential.

Only some nitrogen has been applied on winter wheat and winter rye to date. Nitrogen rates up to 120 pounds per acre.

Sulphur on Wheat – project underway again in 2013. General recommendation of 1 kg per 10 kg of nitrogen applied. See article – Do I need to apply sulphur to winter wheat?

Forages
Alfalfa Stand Survival – need a few more warm day to get a clear picture, but significant losses in some areas. Dead plants are easy to pull out in most cases. Generally, new seedings with stubble left overwinter fared better than older stands or stands harvested last fall. It will be important to walk fields in about a week to assess individual stands. Note, just because there are new shouts emerging doesn’t mean that the plant will survive. Often damaged plants will put out 1 to 3 inches shoots growth and then die off.

Winter Cereal Crops as a Forage – Trial
• Trial initiated across Ontario fall 2012 with Winter Triticale, Winter Rye & Winter Wheat and some locations with Winter Barley.
• Planted in October 10th at the Winchester Research Farm
• Poor winter survival with all species accept for winter rye this year.

Annual Ryegrass (Jim Johnson 1993, 94 & 95 – Kemptville, Verner & New Liskeard) :
• Summary – Under good conditions, annual ryegrass can provide high yields of average quality, highly palatable forage. Under poor seedbed conditions, annual ryegrass yield will often be disappointing. Three cuts per year are possible, although two cuts followed by a grazing pass may be more practical. Aftermath growth is very dependent on rainfall. Although not part of the experiment, topdressing liquid manure after each harvest should boost yield and crude protein content of the regrowth. Annual ryegrass is ideal for late fall grazing since it continues growing into October and winter survival is not a consideration. 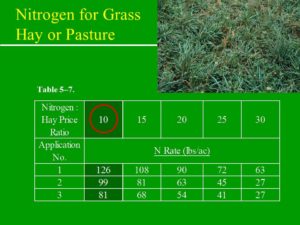 At this time, acreage intended for corn is similar to that of 2012.

As with corn, soybean acreage should be similar to that of 2012. At this time, the intented IP acreage is down in part due to Group II herbicide resistance.

Research at the Winchester Research Farm has shown that a yield gain of 5 bu/acre or more can be obtained by planting longer-day soybeans varieties (about 200 heat units longer than the traditional ‘adapted’ varieties). Certainly worth a try on some acreage. Best yields are obtained when soybeans are planted between May 5 to 15.

Eastern Ontario Crop Diagnostic Day will be on Tuesday, July 16, 2013 at the Winchester Research Farm of the University of Guelph, Kemptville Campus.