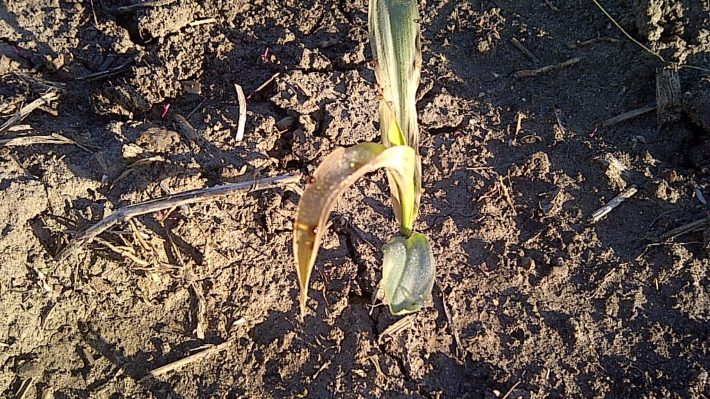 With three consecutive days of morning frost in many parts of the province, the two most common questions are 1) Will the corn be alright? and 2) When can I start to apply herbicides? frost injury on the morning of May 27th, 2013. The third morning in a row with frost.

Question 1 is answered nicely by Greg Stewart in this story (the abbreviated version is that things will be fine but if you are nervous person like me its best to go away for a week before you look at the field again).  But when is it alright to go in and make herbicide applications in corn after a frost event? My personal view is that its best to see some new growth on the damaged corn plants before you get to keen about applying herbicides. The crop is under stress so lets not make it worse. Keep in mind that weeds also get injured by frost, so they to should be re-growing before applications are made, or control may be compromised.In both instances, it usually takes 48 hours or longer before good regrowth has occurred. That all said, lets scan the product labels to see if there are any specific mention of frost conditions. 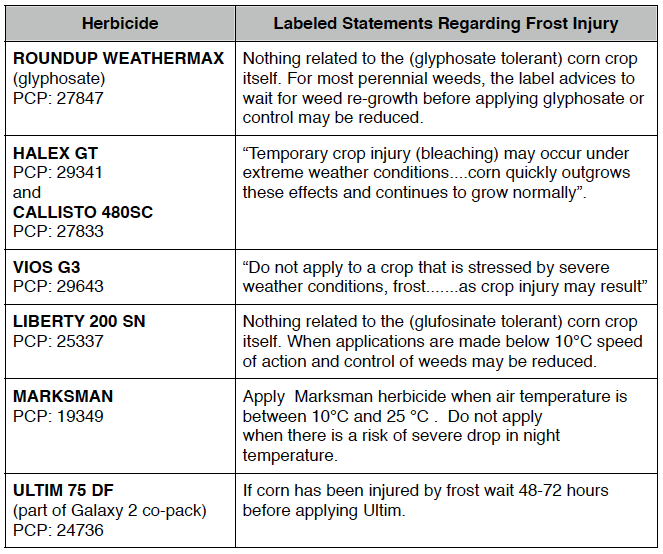 So in general, herbicide labels either state that injury may occur under extreme conditions, but don’t mention when you should resume application after a frost, or they are quite specific and state that if frost injury has occurred, wait 48-72 hours before applying. Corn at the V1 or 2 leaf over stage that was damaged by frost.

Bottom Line: I have spoken with a number of “seasoned” industry representatives who in the past have gone through herbicide applications after frost injury and their consensus is pretty consistent. Ideally delay herbicide applications until temperatures stabilize and when both the crop and the weeds have shown visible signs of re-growth. Specifically for the “hormone” herbicides, like Marksman and Banvel II, the manufacturer is recommending waiting a minimum of 72 hours after frost before application.

For glyphosate in Roundup Ready corn, the risk of further injury is thought to be small, simply because in many instances there is not a lot of green tissue left on the corn plant to absorb and take up product. However, target weeds may also have reduced green tissue for uptake and therefore reduced control. If you feel that you can’t wait (because you have too many acres to cover), prioritize applications to those fields that are planted with herbicide tolerant hybrids that will be applied with “safer” herbicides like glyphosate and that appear to have minimal frost damage to the target weeds.

Why its important to scout the stage of corn at the time of frost injury: Even if a corn plant loses leaves after a frost it does not change the growth stage of the crop. A corn plant at the 2 leaf over stage (V1) that loses both leaves from frost does not go back to VE (emergence). Make note of how many leaves were (or will be) lost to frost so that you can accurately stage the crop and identify when the maximum crop stage for the intended herbicide is reached. If you’re confused about the different corn staging methods, the following provides an overview. 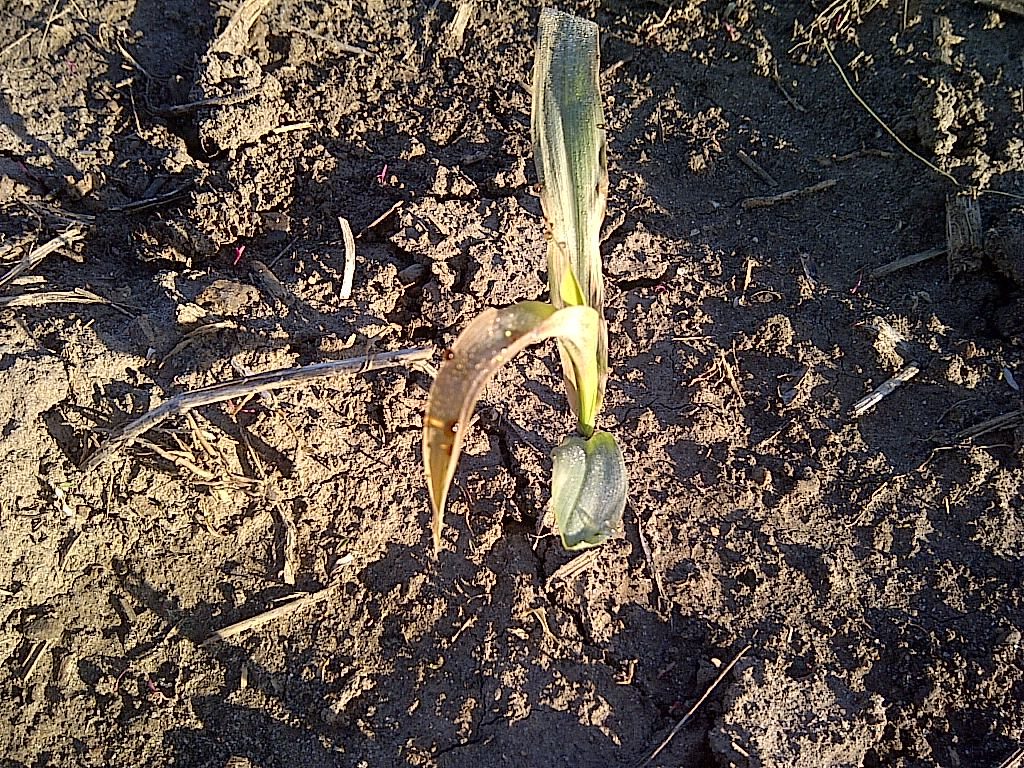