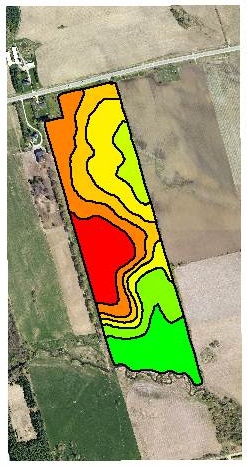 Nicole Rabe May 21, 2013 3823 Comments Off on Getting Started with Variable Rate Nitrogen
Precision Agriculture

When you don’t have the luxury of starting with multiple years of corn yield data how does one get started with a variable rate nitrogen strategy? 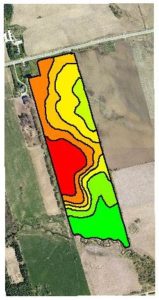 Initial assessment of the field needs to question how variable the field actually is, and more to the point – what is driving the variability across that field? Greg Stewart and I began this discussion with Greg Kitching (Integrated Solutions Consultant, Premier Equipment) who is the industry partner with OSCIA on the Oxford County Farm & Food Care WRAMI project discussed in last week’s Precision Ag post. This field (near Ayr) was selected as the variable rate nitrogen (VR-N) trial. The only piece of information we had was the 2012 soybean yield map. Given the extremely dry conditions last summer starting a zone management strategy from that particular growing season was not ideal. After a look at the 2012 soybean yield zones, and a visit to the field, it was determined that topography was definitely influencing yield response across that field.

The entire field had approximately 30lbs of ESN uniformly applied on May 8th.  Variable rate 28% was then pre-plant incorporated on May 9th using a 90ft sprayer (below). 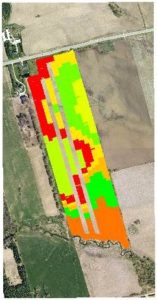 The corn was then planted in 30″ rows later that same day using a 12 row planter. After looking at the as-applied map, Greg Kitching noted some things to think about as you prepare your first VR-N application plan “check your nozzles before going to the field, look at the map and the range in the application rates, if it quite large ensure that your nozzles are rated to handle that kind of range, also make sure you watch your ground speed in zones where rates are higher”.

Two passes did not receive 28% and three (30ft) uniform rates of N will be applied at side dress time.  The goal is to check yield response from uniform rate after harvest in the low, medium and high topographic zones.

We assumed initially under more conventional tillage practices that high slope position on this field have less organic matter, less available N, and potentially less moisture holding capacity and vice versa in the low spots. We will evaluate what N rates made the most sense across that field in terms of yield response. Can we be certain that topography (and the relationship to organic matter etc.) is  the only driver here? PSNT sampling will be done by topographic position in the passes that did not receive 28%. This will allow for a comparison with the new NPA soil test recommendations from Brookside Laboratories.  Check back in June when we report more on this VR-N trial.