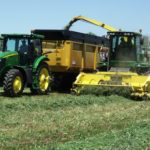 The most common LAB in commercial inoculants are Lactobacillus plantarum, Enterococcus faecium, various Pediococcus species and other Lactobacillus species. Species and specific strains of LAB in commercial inoculants have been selected because they grow rapidly and efficiently, and produce primarily lactic acid. They increase the fermentation rate, causing a more rapid decline in pH, with a slightly lower final pH. The products of fermentation are shifted, resulting in more lactic acid and less acetic acid, ethanol and carbon dioxide. Lactic acid is stronger than acetic acid, and contains almost as much energy as the original sugars.

The improved silage dry matter recovery from the silo is due to the more efficient fermentation to lactic acid. Undesirable fermentations produce large amounts of carbon dioxide that is lost to the environment, resulting in dry matter losses, otherwise known as “shrink”. A certain amount of the silage put in the silo is actually used in the fermentation process and lost. The visible shrink in a silo is actually fermentation losses and should not be confused with silage “settling”. For example, by using a silage inoculant, the dry matter losses in a well-managed bunker silo can be reduced from 15% to 12 – 13%, a reduction of 2 to 3 percentage points.

Animal performance improvements, particularly feed efficiency and digestibility, are partially due to the more efficient utilization of lactic acid over acetic acid in the rumen. Research has more recently documented some improvements in fibre digestibility. Ammonia-nitrogen production can be reduced because a faster fermentation results in less breakdown of the protein and better protein utilization. LAB do not grow on amino acids, and they compete against bacteria that do.

Bunk life, also known as “aerobic stability”, can be either improved or worsened by a LAB inoculant. Reduced acetic acid can actually reduce bunk life, but this can be offset by the reduced pH, particularly in haylage. The purpose of inoculants containing  L.buchneri is to improve bunk life.

How Well Do They Work?

Whether or not the benefits of using an inoculant are greater than the cost of the product can sometimes be a challenging question at the farm level. It is difficult for a farmer to see “reduced dry matter losses” and subtle improvements in animal performance, even when they exist. Are the increased gains or milk production due to the inoculant, or are they due to some of the many other management factors in silage and livestock management? University research, conducted by some of the silage experts, has shown that indeed some of the inoculant products work very well in certain situations. Many dairy, beef and sheep producers are now using haylage inoculants as a standard management practice.

Alfalfa, grass and cereal crops can respond well to commercial inoculants. However, not all inoculants are equally successful in improving fermentation, bunk life or animal performance. A survey of older research evaluating inoculants conducted by Dr Richard Muck, USDA Dairy Forage Research Center indicated fermentation was improved in over 70% of the alfalfa and grass silage studies. Improvement to milk production and feed efficiency was seen in more than 40% of the studies, while intake and gain were improved in over 25% of the studies. In some studies the improvements in animal performance were substantial. It is important to keep in mind that different inoculant products are not all equally effective, and that these studies likely included some mediocre inoculants, as well as some that performed well.

Using some quick and dirty math, if an inoculant product costs $1.50 – 2.50 per tonne of haylage, and if haylage is valued today at over $100 per tonne, does the inoculant pay for itself? If the fermentation dry matter losses are reduced by a modest 3 percentage points, it would easily pay for itself by reduced shrink alone, before potential improvement in bunk life and animal performance are even considered.

When Do They Work Best?

If there is a high natural population of lactic acid bacteria, an inoculant is less likely to dominate the fermentation and provide a benefit.  A long wilting time (> 2 or 3 days), low silage moistures (< 60%), rainfall during wilting, and higher wilting temperatures, decrease the chances of an inoculant being as successful, because these situations increase naturally occurring but less efficient bacteria. Therefore the conditions for the greatest chance of an economic benefit from a haylage inoculant would be:

When forage in the windrow is rained-on, undesirable soil-borne clostridial bacteria are splashed onto the crop. It is sometimes difficult to dominate these undesirable bacteria with a commercial inoculant, and an inefficient fermentation may be the result. Also, because sugars are the principal food for LAB, low sugar levels in alfalfa can limit the success of inoculation. Rainfall will leach out some of the soluble sugars, which could be more limiting to a successful fermentation than inoculation.

Enzymes additives are sometimes included in inoculant products. Enzymes include cellulases, hemicellulases and amylases to help break down cellulose, hemicellulose and starch. In theory, these enzymes break down some of the fibre and starch sooner than normal, and therefore provide additional initial substrate for the bacteria to ferment. Research results are mixed and inclusion rates may be insufficient for desired results. Product cost and effectiveness should be considerations.

Some newer inoculants contain bacteria that produce their own enzymes that have been shown to improve fibre digestibility and therefore digestible energy and intake.

LAB inoculants are typically more successful in alfalfa and grass silage, than in corn silage. Corn silage has a higher sugar content and lower buffering capacity, allowing an easier fermentation with higher lactic acid, lower acidic acid and a lower pH. It is more difficult to improve the fermentation of corn silage.

Corn plants standing in the field at harvest time are covered in naturally occurring LAB (more than 10 times that found on alfalfa), making it more difficult for a commercial inoculant to dominate the fermentation. A benefit of a commercial LAB inoculant in corn silage is more likely in immature corn, overly dry corn and the day after a killing frost.

Another difference between corn silage and haylage is bunk stability – the susceptibility of corn silage to secondary yeasts and moulds while being fed. This shorter bunk life means it is more difficult to keep corn silage fresh. A LAB inoculant results in more lactic acid and less acetic acid, but lactic acid is preferred by yeasts when exposed to oxygen. Acetic acid can inhibit the growth of yeasts that are responsible for heating. Conventional LAB inoculants that reduce acetic acid can actually reduce bunk life.

Corn silage inoculants containing both LAB and Lactobacillus buchneri are different in that they are “heterofermentative”. They producing lactic acid earlier in the fermentation to reduce fermentation losses, and then acetic acid later in the fermentation to improve aerobic stability to stay fresher longer in the feed bunk.  The acetic acid reduces the growth of yeasts and makes the silage more resistant to spoilage and heating at feed out and improves silage bunk life. L. buchneri  utilize some of the lactic acid to produce acetic and propionic acids. The increased acetic acid and aerobic stability comes at some expense of increased fermentation dry matter losses. However, dry matter losses due to aerobic spoilage of corn silage are typically much larger than fermentation losses.

In situations where spoilage at feedout is an issue, the use of L. buchneri  inoculant on corn silage may result in less mould and mycotoxins, improved palatability and intake, and reduced total dry matter losses.

Read and follow product label directions, including application rates, storage, re-hydration, handling and application. Product labels will detail CFU (colony forming units) per gram of forage to apply at recommended rates.  Inoculants should be stored in a cool, dry place to maintain bacteria viability. Dead bacteria do not work.

Be sure to properly calibrate the applicator. Inoculant application at the harvester usually works the best, especially with drier forage. Liquid products have some advantage over granular products because of more uniform application. Research suggests that liquid inoculants are more effective than dry inoculants when applied to haylage that has been wilted to lower moistures.

There are significant genetic differences between LAB species and strains. Not all products are equally effective, but it is difficult to compare products. Ask company representatives to provide research that substantiates their claims for the product. Determine whether these claims are of value to you. Are the claims for reduced dry matter losses, or improved feed efficiency in lambs? Can the company provide product quality control assurances?

There is an interaction between the crop and commercial inoculants, so only inoculants selected and labeled for a particular crop should be used on that crop. For example, don’t use an inoculant labeled only for corn silage on alfalfa or grass haylage, or vise versa.

Remember, the application of a silage inoculant will not overcome the effects of poor silage management or poor weather conditions. The keys to good silage fermentation are harvesting at the correct moisture and chop length, quick and adequate packing, and sealing immediately after filling. (Refer to “Silage Fermentation Problems” https://fieldcropnews.com/2012/11/silage-fermentation-problems/)  However, under good management, commercial inoculants are a valuable tool in silage systems.