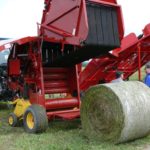 What’s better on large round bales – net wrap or twine? Of course, the question is largely a matter of personal preference.  Some of the suggested advantages of net wrap include faster baling, lower baling losses, better bale integrity during handling and transport, better water shedding ability and lower outdoor storage losses. The net wrap material and equipment do add to the costs of baling. Some older research by Dr Kevin Schinners, Agricultural Engineer at the University of Wisconsin, suggest that the added costs are justified in many situations.

Only 1¼ to 2½ turns of the bale are required to wrap a bale with net wrap, compared to 20 to 30 turns with twine. According to the WI research, a baler set up to net wrap can bale 32% more bales per hour than one using twine. This speeds up the baling process, allowing more to get done when the weather is good. It also saves fuel and labour. This significantly greater productivity is the main advantage of net wrap balers, particularly for farmers with large acreages and custom operators who can pass on the higher costs to their customers.

Outdoor hay storage results in a great deal of spoilage. Storing hay inside is recommended to avoid costly spoilage, but not always possible. Tarps can help, but can be challenging to maintain. The reality is that there are sometimes lots of bales stored outside uncovered. “Water shedding ability” for storing bales outside is frequently cited as a perceived advantage of net wrap, but is this real?

In the WI trials measuring moisture levels in the “outside rind” of the bales, net wrapped alfalfa bales did shed rainfall better than twined wrapped bales and were lower moisture. Finer stemmed grasses seemed to form a better thatch. However, some of the advantage of improved water shedding ability is lost if bales are not stored on a well drained surface (crushed rock, pallets, etc). Otherwise, rainwater will run off the bales and accumulate at the bottom. When bales sit directly on the ground, they act like a sponge and absorb moisture, and significant spoilage occurs at the bottom of the bales.

In this study, in the outside hay rind, nutrient composition was significantly higher and dry matter losses were lower for net wrap compared to twine, but the core was generally unaffected. Average total dry matter losses for bales stored outside on the ground were 11.3% for plastic twine wrapped bales and 7.3% for net wrap. However, both of these options have significantly higher losses than inside storage. Net wrapping bales for uncovered storage outside does not substitute for inside storage. With today’s higher hay prices and production costs, inside hay storage is much more economic.

Balers can be easily equipped to net wrap bales. The wrapping mechanism can increase the initial cost of the baler by 15 to 25%. For example, it could add $5,000 to the cost of a new $30,000 round baler. The net wrap material also costs more. Depending on the number of wraps and other assumptions, the cost may be approximately doubled from about 50¢ to about $1 per bale, or about $1.25 to $1.75 more per tonne of dry hay.

Some producers have found that net wrapped bales are more inclined to freeze hard to the ground. Although removing frozen twine from an iced-over bale during the dead of winter is nobody’s favourite job, this can be even more challenging with net wrap.

A net wrap system costs more than twine, but in many situations, including large volume operators, hay producers marketing large round bales, and farmers using some outdoor storage, those costs can be recovered by faster baling and reduced dry matter losses.