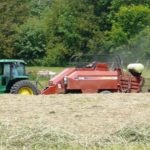 July continues to be frustrating for those trying to make quality dry hay. Many areas continue to have had limited opportunities to make hay without rain-damage or heating. We are in a unique situation where there are considerable amounts of both first- and second-cut being made when weather conditions are suitable. Some rain-damaged hayfields have been blown back. First-cut hay left to make is extremely advanced in maturity. Supplies of “horse quality” (green, no mould) first-cut hay made without rain damage are quite limited in many parts of the province. Prices for quality hay are generally strong and holding steady, but prices for poorer quality hay are declining.

Some hay that was baled at too high a moisture is heating, so be sure to monitor storages. Heating occurs from the rapid growth and respiration of mould and bacteria, producing even more moisture. If the moisture and heat cannot dissipate, high temperatures build-up and the process becomes self-sustaining. Even low amounts of heating can result in dusty hay with reduced feed quality and palatability. If severe, heating can result in a barn fire. The critical time for spontaneous combustion is usually 2 to 3 weeks after the hay is put in storage. If you detect a slight caramel odour, or a distinct musty smell, chances are you have a problem. Probe-type hand-held electronic moisture testers are a useful tool to monitor hay heating. Keep in mind that moisture readings can be subject to variability and error, and testers should be calibrated to forage species, bale type, acid use and bale density. Hay bale temperatures 2 – 3 days after baling as hay “sweats” will often be 10°F above what the ambient temperature was at the time of baling. Temperatures above 120ºF indicate that there is some microbial activity that may be a problem. Refer to “Silo and Hay Mow Fires” at www.omafra.gov.on.ca/english/engineer/facts/93-025.htm. If a temperature probe is not available, insert a copper or metal pipe into the mow.  If after an hour it is too hot to hold with bare hands, there is a severe problem.  It is essential that hay storages have adequate ventilation to enable moisture to dissipate from bales. Tightly stacking bales should be avoided. The use of pallets prevents spoilage of the bottom row of bales.

Buffered propionate hay preservatives can assist in preventing mould when baling “tough” hay.  Propionate is an organic acid that acts as a fungicide, inhibiting the growth of moulds while the bale dissipates moisture in storage.  Follow product label directions and use the correct application rate according to the percent moisture of the hay. Be sure that there is adequate ventilation in the storage to allow moisture to dissipate from bales.  Refer to “Preventing Mouldy Hay Using Propionic Acid” at www.omafra.gov.on.ca/english/crops/facts/preventing.htm