The following 10 herbicide injury related scenarios where showcased at the 2013 South West Diagnostic Days held at the University of Guelph, Ridgetown Campus. These scenarios are either duplications of common mishaps that have occured in Ontario or a “look and see” based on farmer or agronomist query. It is important to point out that some of the scenarios shown before are in direct violation of the herbicide label (hence one of the reason its important to review the directions for applications provided on the label).

Scenario # 1: Fierce: A new soybean herbicide being applied at an innappropriate timining.

Fierce is a broad-spectrum herbicide that should be available for the 2014 growing season. It is comprised of flumioxazin ( group 14: Valtera) and pyroxalsulfone (group 15) and must be applied prior to crop emergence either prior to or shortly after planting. The photos below demonstrate the type of injury that will occur when Fierce is applied to emerged soybeans. The flumioxazin portion of this herbicide will severely “burn” any green leaf tissue and in the case of these particular soybean plants, the burning was so severe that the growing point was killed in half the plants while the surviving plants have branched off new stems at the nodes above the cotyledons. 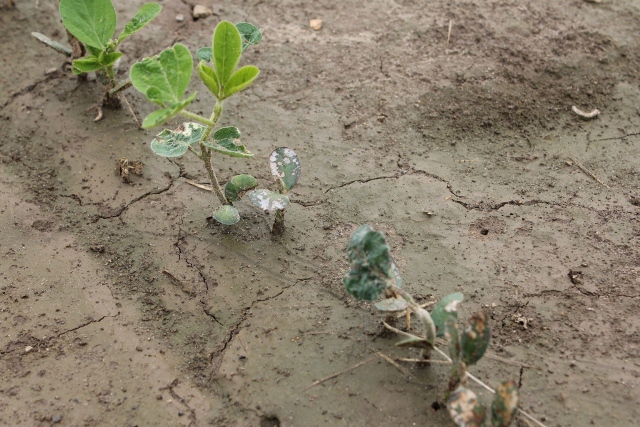 Optill is pre-plant  broadspectrum herbicide comprised of imazethapyr (group 2: Pursuit) and saflufenacil (group 14: Eragon). Since imazethapyr can be applied both pre and post emergence to soybean, a couple of  growers unfortunately found out the hard way that the saflufenacil portion of this herbicide will “burn off: any leaf tissue when applied to emerged soybeans (in this case prior to the 1st trifoliate stage). Saflufenacil is from the same group of herbicides as flumioxazin is (which caused similar damage in Scenario #1) and therefore the crop response is similar. The photos below are the result of the normal field rate being applied. There have been other instances of Optill injury as a result of improper sprayer cleanout which has resulted in significantly less injury. In this particular scenario all of the plants have survived but have been set back substanially.

Scenario #3: Can I apply this new active ingredient to emerged soybeans? Pyroxalsulfone (group 15), a new active ingredient registered for use in 2013 for Field corn (sold with Aim EC as part of the co-pack called “Focus”) will most likely be available also for use in soybean in 2014, but as a pre-emergent treatment only. Since this herbicide is quite effective at controlling Eastern black nightshade the question has been asked if pyroxasulfone could be applied to emerged soybeans with glyphosate in Roundup Ready soybean to provide residual control of nightshade.  The photos below show typical group 15 injury in soybean such as a “draw string affect”.  At 5-7 days after application the trifoliate leafs exposed at the time of application had some necrosis (browning) on the leaf margins. After more time has passed, the necrosis dissipates too leaf distortion, while the new growth is unaffected. 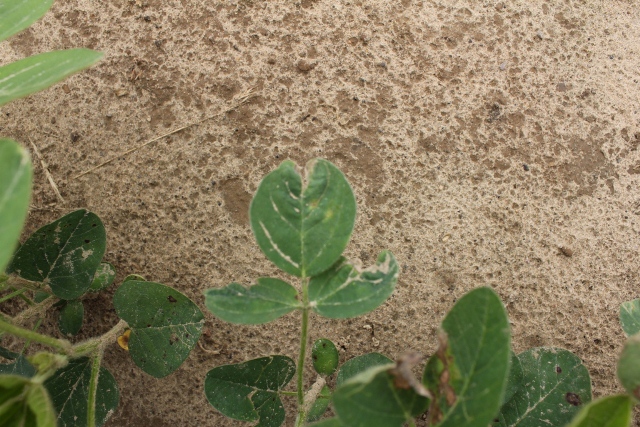 In 2012, 2,4-D ester applied pre-plant in soybean was regsitered for the control of glyphosate resistant Giant ragweed in soybean. Although the data collected to register this application in Ontario indicated an acceptable level of crop safety there are both environmental conditions and warnings on the label that increase the risk of crop injury, which has occurred below.  In general the risk of 2,4-D injury to soybeans with pre-plant applications increases when:

The photos below show soybean response to 2,4-D ester injury as a result of all of the above cirumstances occurring. Fortunately the new growth is unaffected. 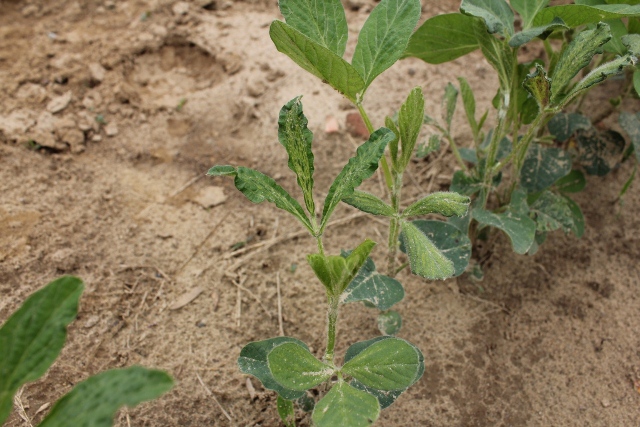 Its extremely difficult to differentiate between injury caused by specific active ingredients within the same broader chemical family. The first photo below shows injury caused by a postemergent application of Sandea (halosulfuron), a herbicide that has been registered in the U.S. for several years and is expected to be registered for use in Canada in 2014. Interestingly enough, edible beans have good tolerance to Sandea but clearly soybeans do not share the same level of tolerance. The right side of the below photo demostrates injury caused by a postemergent application of Refine SG, a cereal herbicide, but occasionally has been inadvertently sprayed on soybeans when grown immediately beside a field of spring of winter wheat.  Typical “SU” injury symptoms are severe stunting, yellowing of leaf tissue, distortion/necrosis of leaf tissue and reddening or browning of the leaf underside. 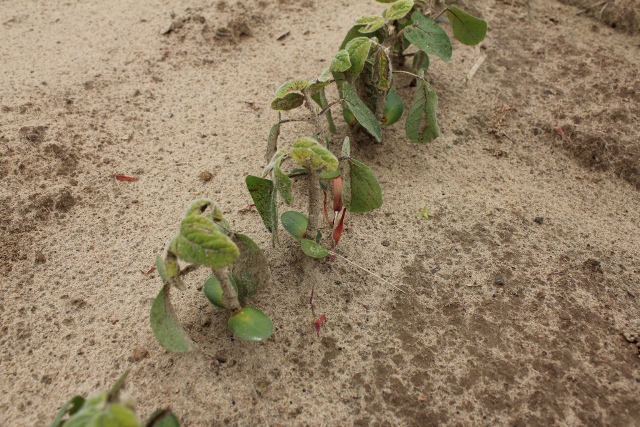 Scenario #6: The importance of field testing to local conditions.

A producer came upon the following scientific article that looked at applying 2,4-DB postemergence in soybeans to enhance the control of weeds beyond their optimum stage of control with other herbicides. Therefore 2,4DB was applied and the overlap rates (140 gai/ha) showed the following injury.

Scenario #7: I have spray solution left over, and I applied it to ground that I’m planning to plant soybeans. Will the soybeans be o.k.?

In 2013, I recieved two calls from growers that had similar problems. They had rented new land last fall and planted it to winter wheat. When they sprayed their cereal fields for weeds, the size of their fields were much smaller than what they were told. As a result they had spray solution left over. Normally one would dilute the solution and apply over the same field (remember that for herbicides to be registered in Canada, they have to show a level of acceptable crop safety when an “overlap” rate is applied). However, in both instances they applied the wheat herbicide over ground intended for soybeans. The cereal herbicides in question were Infinity (pyrosulfotole/bromoxynil) and Refine SG (tribenuron/thifensulfuron). It is known that legumes are sensitive to both of these herbicides when applied to emerged legumes, however when applied prior to planting soybeans, this demonstration showed no ill effects at the normal field rate of both herbicides. One of the possible explanations for this according to Bayer CropScience is that pyrosulfotole will breakdown quicker under moist soil conditions and the 2013 growing season has seen significantly more precipitation compared to the 30 year average at this site. In a drier than normal year, the potential for injury would be greater. A special note: one would want to see numerous replicated trial work before having confidence in the results observed in this demonstration.

Scenario 8: I have soybeans right beside my wheat field, if I spray bromoxynil/MCPA on wheat and the spray boom hangs over onto small part of the soybean field will it kill my beans?

The photos below are of bromoxynil/MCPA being applied to emerged soybeans (unifoliate stage) at 560 gai/ha which is the normal field rate. You will note that although the beans will not die, you can see severe leaf necrosis caused by bromoxynil along with leaf distortion and some stem twisting by MCPA. 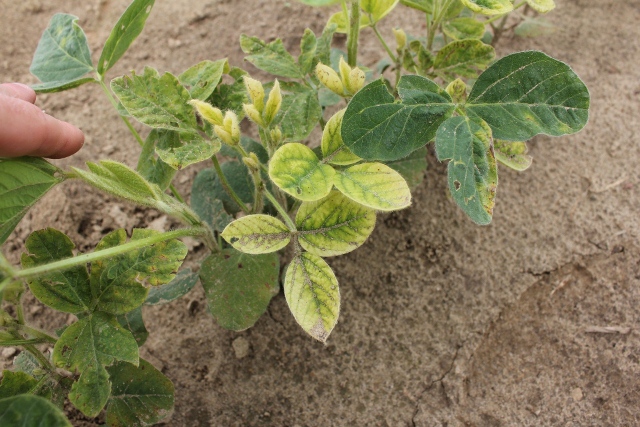 The below photos show the response of dicamba contamination as a result of  improper sprayer cleanout. The equivalent of 5% (15 gai/ha) of the low rate in field corn was applied to soybeans. Although the soybeans will survive, there is noticeable stunting, leaf cupping and darkening of leaf tissue. The impact on yield will depend on the level of stunting. If injury is simply leaf distortion with no internode stunting, field experience has shown the impact to be small.