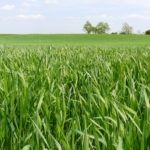 Fall rye is an excellent forage crop when seeded after early-fall harvested crops. It is ready for harvest in southern Ontario in mid-May, which provides great opportunities for “double crop” options, and can also fill in the gap in years when forage supplies are short. Seed as early as possible in September, apply nitrogen in the spring, and time harvest for nutrient quality needs.  Do not confuse cereal rye (Secale cereale) with ryegrass (Lolium multiflorum or L. perenne), as they are totally different grass species with quite different characteristics.

Fall rye prevents erosion and gives good weed suppression. Rye is very cold tolerant, the hardiest and most disease resistant of the winter cereals. Fall rye has an extensive fibrous root system, can scavenge nitrogen very effectively, and utilizes early spring moisture for rapid growth. Fall rye is faster growing and earlier maturing in the spring than the other winter cereals, including wheat, barley and triticale. This enables an earlier forage harvest and more “double crop” options.

Fall rye grows well on lighter and low pH soils, but does not do well on poorly drained, heavier soils. Forage rye is higher yielding, but not as palatable as winter wheat. Rye matures rapidly at the flag-leaf, boot and early-heading stages, with significant reductions in forage quality. This can create the challenge of a very narrow harvest window, particularly if there are rain delays.

Farmers looking for extra forage can plant fall rye following the harvest of many crops, particularly corn silage. Forage rye harvested in mid-May can be followed by a late-planted crop, such as soybeans, edible beans, or a warm-season annual forage crop such as sorghum. Winter wheat heads two weeks later than fall rye making forage wheat harvest too late to be followed by corn or soybeans. In dry years, decreased moisture in the soil profile following forage rye can have a negative effect on the yield of the following crop. Following harvest, it is essential to completely kill the rye with glyphosate or tillage to minimize shading and competition for moisture.

Rye is sometimes noted for having an “alleopathic effect” that suppresses the germination and growth of weeds and other crops. With most of the rye plant removed, alleopathy is a low risk in forage situations. The possible exception is with no-till corn on heavier soil types.

Fall rye is easy to establish and can be seeded from late-summer to late-fall. If harvest as silage the following May is planned, fall rye should be seeded in September, but later seedings can work. Early planting allows more time for tillering, higher forage yields, and slightly earlier forage harvest dates. Some growth going into winter is preferred for early spring growth and good yields. Seed is relatively inexpensive. Under good conditions, fall rye can be seeded at 110 kg/ha (100 lbs/ac), but the seeding rate can be increased up to 190 kg/ha (168 lbs/ac, 3 bu/ac) if the seed is broadcast rather than drilled, or if the seeding date is late.

Fall rye is best used to provide early-spring grazing, but can also be grazed into late-fall. It is ready to graze early in the spring and growth is very rapid.  To ensure that it does not get too mature, be prepared to move livestock frequently by strip grazing. Grazing rye on wet heavy clay soils in late-fall or early-spring is not recommended due to livestock “pugging” and compaction. If fall pasture is desired, fall rye should be seeded by August 15-30th.

Fall rye can be made into good stored feed as either silage or baleage. Fall rye cut at the desired stage is extremely difficult to dry sufficiently to be made into dry hay. Nitrogen applied at 55 – 80 kg/ha (50 – 70 lbs/ac) in the spring at green-up will stimulate tillering and increase forage yield.

The timing of cutting is critical. Quality, palatability, and intake drop very quickly at the heading stage (faster than other cereals) so the optimum harvest window is very narrow. It is recommended to target harvesting forage rye at the flag-leaf or early-boot stage for high nutrient quality. Early-boot generally occurs May 10th – 20th in southern Ontario. At this stage, a dry matter yield of 2 tonnes per acre or more is possible under good conditions.

There can be a very large range in forage quality with only a few days difference in harvest. At the early-boot stage (Zadok Stage 39 – ligule of the last leaf just visible), crude protein (CP) can approach up to 18% (depending on the amount of nitrogen applied), with Neutral Detergent Fibre (NDF) under 50%.

At the head-emerged stage (Zadok Stage 55), CP drops to the 13 – 14% range, while NDF increases to over 60%. This will likely be adequate for beef cows, heifers, and dry cows, but will not be high producing dairy cow or sheep quality.

When rye is cut later, at the early-dough stage, the yield may approach 3 tonnes per acre, but the quality, palatability and intake will be much lower. Delaying forage rye harvest past the boot stage because of bad weather or competing field crop activities is not very forgiving.

Winter triticale, a cross between rye and wheat, has been suggested by Tom Kilcer in New YorkState as being preferable in both forage yield and quality to either fall rye or winter wheat.  His research indicates that winter triticale harvested at the flag-leaf stage (rather than boot-stage) can be very high quality feed for dairy cows. There is limited data evaluating the agronomics and nutrient quality of winter triticale in Ontario, although research is currently underway.  Preliminary Ontario research results suggest that triticale suffers much more from late plantings or adverse fall conditions than rye.  Triticale seed is difficult to source and more expensive than rye.  Harvest of triticale will be slightly later than rye at the same stage of maturity, which may delay planting of the subsequent crop.  While there is good potential for triticale, farmers interested in forage triticale should try rye as well and evaluate them in their own systems.

Seeding fall rye for forage can be an excellent, cheap source of additional feed. Seed as early as possible in September, apply nitrogen in the spring, and time harvest for nutrient quality needs.  By double cropping, rye can fill the gap on years with short forage supplies, or be a regular part of a profitable rotation.