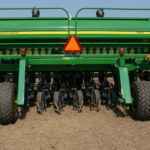 The window for summer seeding alfalfa and alfalfa-grass mixtures is approaching for much of the province.   This can be a good way to establish new fields so that full season yields can be harvested next year. It is typically done after winter wheat or spring cereals are harvested, and also during years when alfalfa winterkill necessitates the quick establishment of new stands. Summer seeding of alfalfa forage mixtures can be a viable alternative to spring seeding. Summer seeding works best on light to medium textured, well-drained soils.  Alfalfa needs at least 6 weeks of growth after germination to develop a crown before killing frost to survive the winter. Recommended summer seeding dates are:

Lack of moisture for timely germination and growth can be a significant risk. If soil conditions are extremely dry and no rain is in the forecast, plans for summer seeding should be abandoned. Conserving soil moisture is critical, so use as little tillage as possible to create a fine, firm seedbed, drill the seed rather than broadcasting it, and follow with a press wheel or packer to ensure good seed-to-soil contact.  Competition from volunteer wheat can be a serious problem. This is especially true if a lot of light grain went through the combine, such as in fusarium infection situations. One approach to reduce the problem is to do some light tillage behind the combine swath to encourage the grain to germinate. A burndown with glyphosate or a second cultivation 10 days later will destroy much of this grain. Do not use companion crops with summer seedings, as they compete for available soil moisture and reduce stand establishment. Seeding alfalfa after alfalfa is not recommended because of autotoxicity and disease. https://fieldcropnews.com/?p=3316

Seeding oats in early-August following wheat for an early-October harvest can be a useful double-crop, low-cost option for producing additional forage supplies. Oats can make excellent feed when harvested at the correct stage of maturity and made into “oatlage” or baleage. Peas can be added where higher forage quality is required.The challenges can sometimes be lack of adequate moisture in August for germination and growth, and having dry enough weather in October for adequate wilting. https://fieldcropnews.com/?p=4264

The Critical Fall Harvest Period for alfalfa is the 6-week rest period preceding the killing frost that allows alfalfa plants to re-grow and build up root reserves. Adequate root reserves improve stand persistence, as well as first-cut regrowth and vigour the following spring.  If possible, farmers should be scheduling their last harvest to avoid cutting during this period, especially those with a history of winterkill. Even when winterkill does not occur, the extra yield harvested during the critical harvest period is typically offset by reduced 1st-cut yield the following spring. Each farmer should weigh their increased risk against their immediate need for forage.  As guidelines, the Critical Fall Harvest Period begins as early as August 10th in northern Ontario, August 25 – 30th for eastern and central Ontario, and September 4th in the southwest.  Cutting in the middle of the Critical Period is usually higher risk than cutting at the beginning or end.  Cutting schedules of less than 30 days between cuts increases the risk of winterkill, while an interval over 40 days (allowing flowering) reduces the risk.   Fields with low fertility, low soil pH, poor drainage, insect or disease pressure are poor candidates for harvesting during the critical period. For information on winterkill risk factors, including the map showing the dates, refer to www.omafra.gov.on.ca/english/crops/facts/91-072.htm.