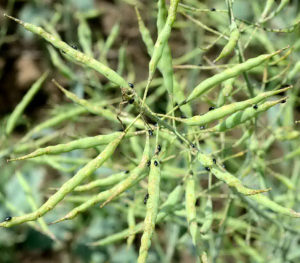 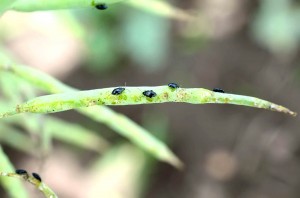 The summer emergence of flea beetles is upon us. In July larvae emerge from the soil and begin to feed on canola pods and leaves.

In most cases, although the damage can be unnerving, the actual yield loss can be low. In 3 years of research testing in Western Canada, only when very high numbers of flea beetles occurred and the canola was quite immature did a yield reduction occur. Flea beetle populations of more than 100 per plant were required to cause economic damage.

Yield reductions can occur occurred when plants are in the early green stage, while seeds are still developing. The green tissues of pods are important contributor to seed fill and yield. Trials show a 2.4-3.5 bu. /ac yield loss when damage occurs early (i.e. seed in lower pods is still translucent).

Flea beetles will continue to feed until pods begin to change colour, before moving on to other food sources.  The younger (upper pods) are most affected. Pods in the middle of the canopy contribute the most to yield, so high flea beetle feeding on these pods will be more damaging.

In the absence of established thresholds, it is suggested that if 50 or more flea beetles per plant are found control may be warranted.

Bee Warning: Do not spray fields in flower while bees are foraging. If necessary, spray late in the day or early morning. Contact local beekeepers in your area, prior to application.

In conclusion, late season feeding damage from flea beetles is rarely a concern. However high numbers (50+/plant) during early pod fill may warrant control. If seeds in lower pods are green or changing colour the canola is relatively resistant to damage.