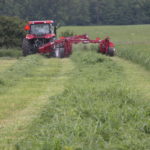 With higher yields, forage inventories have been increased to more normal levels. Hay inventories carried over in the spring were extremely low, and hay prices peaked at historic highs, before softening after first- and second-cuts. Haylage and baleage inventories and quality are very good. Early-cut, green 1st-cut hay is in short supply and selling at premium prices. More readily available, green 1st-cut hay made in July will help fill the horse market with somewhat softer prices. There are large quantities of much cheaper, poor quality, rained-on, dusty 1st-cut hay available. Export demand for quality hay to the US remains strong. With increased land costs, there is a trend to improve forage management to increase yields and quality in order to make every acre count.

There was alfalfa winterkill scattered across the province in some of the higher risk heavier soils with poor drainage, older stands, and fall harvested stands. Extensive winterkill occurred in New Liskeard and eastern Ontario, from Arnprior south, east to Quebec and west to about Brockville. There was 75% winterkill in some of those areas, particularly on flat, heavier clays in the Ottawa Valley. Winterkill included some new alfalfa seedings, as well as orchardgrass. A cool, wet spring delayed green-up and spring seeding, further complicating how to evaluate and replace these stands. In eastern Ontario, where alfalfa winterkill is often chronic, producers have shortened their rotation and stand age, altered their fall harvest management, and have a contingency plan for additional new forage seedings and the use of emergency annuals when winterkill occurs.

Yield is significantly limited in older stands. Dandelions were quite visible this year in weaker, lower yielding stands.  Many stands are simply too old and need to be rotated, but some are also the result of low fertility, poor drainage and disease issues. Older fields that were harvested with aggressive cutting schedules that include a fall cut, often appear to be at higher risk of winterkill and reduced stand vigour and yield the following year. Shortening the rotation to compensate for potential reduced stand life is a good strategy. A 10 – 15% yield benefit to the following corn crop, in addition to the nitrogen credit, go a long way to covering forage establishment costs. (“Forage Options When Winterkill Strikes” https://fieldcropnews.com/?p=6680)

Low soil phosphorus (P below 12 ppm) and potassium (K below 120) are significantly limiting forage yields in many fields. Some yield response is being seen when sulfur (S) is applied to alfalfa in Ontario. Tissue sampling is the best option to predict an economic S response (< than 0.25% S).  About 21% of fields surveyed were < 0.25% S. This usually occurs on low organic matter soils that have not received manure in the last 2 years. (“Let’s Make Hay” https://fieldcropnews.com/?p=2018)

Forage acreage held its own, following significant reductions from 2006 to 2011. Forage seed sales remained steady as farmers established new stands to replace older, less productive, and winterkilled stands. A cool, wet spring with less than optimal soil conditions delayed new seedings. There was significant use of cereals and cereal-pea mixtures as companion crops. . This year’s summer seedings completed during optimum seeding dates in August appear to have been successful. Whereas spring seedings typically have a yield loss the year of establishment, summer seedings (seeded after cereals are harvested) can be a good way to establish new fields so that full season yields can be harvested the following year. (“Summer Seeding Alfalfa” https://fieldcropnews.com/?p=3316)

Brown root rot (BRR) is a is a significant and widespread fungus disease of alfalfa in Ontario.  Infection of the roots can be detrimental to over-wintering vigour and promotes other diseases, winterkill, stand decline and yield loss. (“Brown Root Rot of Alfalfa In Ontario” http://www.omafra.gov.on.ca/english/crops/field/news/croptalk/2007/ct-1107a9.htm)

An alfalfa disease survey indicates that in addition to these newer diseases, more traditional fungal diseases such as phytophthora, pythium, rhizoctonia, and various fusarium species are very common. Refer to “Check Alfalfa Stands This Spring & Make A Plan” https://fieldcropnews.com/?p=5845. With the wet season, there were also some reports of orchardgrass suffering from fungus disease.

Grubs, including June beetles and European chafers, cause significant damage to grass hay fields in lighter soil areas, especially in central Ontario (Oak Ridges Morraine) (“Grub Damage In Hay Fields” https://fieldcropnews.com/?p=2786) Alfalfa snout beetle continues to be reported in small pockets in eastern Ontario. Fortunately it is presently contained to small areas, because it is very damaging and difficult to control.

Alfalfa weevil damage occurred in some areas, especially in south-western Ontario. Harvest was the best management option and few acres were sprayed. However, larvae feeding was reported for an unusually extended period of time, until late-June. (“Alfalfa Weevil” https://fieldcropnews.com/?p=3108)

First-cut yields were frequently reported as average or above. With some cooler than normal weather, the proportion of grass in mixed stands and the grass maturity relative to alfalfa was more advanced. Harvest of first-cut “dairy quality” alfalfa haylage was in full swing by the week of May 27th in much of southern Ontario. The weather allowed for a timely first-cut haylage harvest resulting in forage quality (crude protein, fibre and fibre digestibilities) generally close to normal. (Using “Scissors Cutting” To Optimize Forage Quality” https://fieldcropnews.com/?p=2610)

Weather conditions for making quality first-cut hay without rain-damage were poor in in most of June, so considerable amounts of baleage were made. (“Baleage Tips” https://fieldcropnews.com/?p=3531)  Others relied on the use of propionic acid in making dry hay. (“Preventing Mouldy Hay Using Propionate Preservatives” https://fieldcropnews.com/?p=3655) Significant amounts of 1st cut hay was made that was either rain-damaged or became mouldy after baling at moistures that were too high. Many farmers wanting to make green, dust-free hay for the horse market were forced to delay 1st-cut until about July 11th. Although late, the nutritional quality of this hay will be adequate for many horses.

Second and third-cut yields were variable, depending on rainfall in localized areas, but were typically average or above average.  Where fourth-cuts were taken, yield and quality were very good.

There was significant harvest during September. Depending on the age of the stand, fertility, pH, drainage, and fall and winter weather conditions, this may increase the risk of alfalfa winterkill.  Closely monitor these fields in the spring. (“Taking That Fall Cutting of Alfalfa” https://fieldcropnews.com/?p=5098)

In an effort to double crop acres at a low cost, many farmers grew summer-seeded forage annuals. Acres were reduced from 2012, when an estimated 300,000 acres were seeded.  Annual forage crops include cereals (mostly oats, but also some barley and triticale) and cereal-pea mixtures, and also warm season annuals such as sorghums, sorghum-sudans and millets. Much of this was seeded in August following winter wheat and spring cereals and harvested as haylage and baleage. Significant quality forage was produced. There was also some September and early-October seedings of fall rye, which will be harvested as haylage in May. (“Summer Seeding Oats For Forage” https://fieldcropnews.com/?p=7813, “Double Cropping Fall Rye For Extra Forage” https://fieldcropnews.com/?p=5241)