Synopsis: Cold, backwards weather has delayed decision making on a number of questionable winter wheat stands. The majority of  Agricorp damage claims are now coming from mid-western Ontario.  Estimated that 10-20% of wheat may be replanted.  In southwestern Ontario, actually acres being replanted is much less than early estimates. Strong wheat and straw prices are helping to drive ‘Save the Wheat’.  Several reports of poor survival of alfalfa fields, particularly older stands and those under stress last year.  Majority of N application to wheat taking place this week.  Very little field work in last 2 weeks.  Lots of red clover being applied.

Wheat: Majority of damage to wheat is result of drainage, ice formation, heaving, headland compaction and some snow mould. Nitrogen application is making a big difference to growth and recovery of stressed stands.  Poor tillering in many stands reported. Where a grower is unable to fulfill their contract, their obligation will depend on contracting agent. In some cases, may be able to roll the contract to 2015.

Alfalfa: Several reports of poor survival.  Fields need to be assessed, to avoid any surprises at first cut. Older stands and those that were under stress last year (e.g. late fall cutting, icing, leafhopper damage) are showing greatest damage.  Recommended plant stand guide is 12 to 20 plants/sq ft. for 1st year stands, 8 to 12 for 2nd year stands, and minimum 5 plants for anything 3 years or older. For more information refer to:  http://fieldcropnews.com/2014/05/forage-report-may-7-2014/#sthash.cCHUXiD3.dpu

The Trouble with Phosphorus:  Bonnie Ball presented overview on phosphorus issues in waterways and Great Lakes. Significant amount of misinformation about issues with phosphorus getting into water sources. Drainage tile has been wrongfully blamed for significantly contributing to P movement. As one example total P load on a loam soil with 1% slope was 3 times higher where there was no tile vs conventional tillage with tile. Over 80% of total P came from overland flow. Estimated 24% of P movement is from tile. Most of P movement happens in worst weather conditions (i.e. runoff, etc). P moves into tile through preferential flow ( e.g. worm holes, soil cracks).Approximately 70% of annual total P movement is non-growing season ( e.g. 80% of particulate P load into a water course occurred in 2 days with a 50 mm rainfall on 300 mm snow). In comparing no-till  to conventional tillage system, no-till has higher percentage of  total P coming from dissolved P vs particulate P, but total P is 1/2 that occurring under conventional tillage system. Key message to reduce P loading is keeping soil covered all the time (minimum 30% residue cover all the time), and controlling erosion on concentrated flow paths through soil stewardship practices

The Trouble with Nitrogen:

There are web based calculators available for estimating volatilization losses from broadcast urea and from manure. 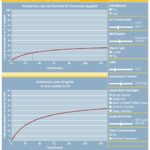