When springs are cool and wet, it results in two things.  1) Difficulty with getting good weed control in before planting and 2) Pushing planting into cooler soils that may cause the seed to sit for a while.  Both of these can increase the risk for early season pest issues.

Here are some of the pests you may see when digging up seeds or seedlings that seem to be struggling.  Can you ID these pests? 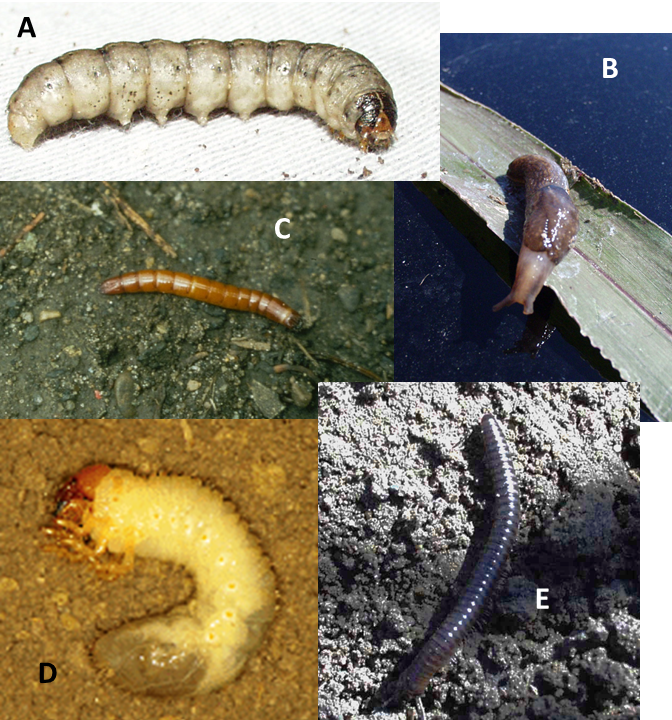 A)  Black cutworm: Adult moths have likely been making their way into Ontario on storm fronts since late April.  They lay their eggs on green vegetation on the field surface and larvae from those eggs are ready to feed as soon as the crop emerges.  Larvae are blackish-grey along their backs and have a lighter underbelly.  Each body segment has 2 pairs of black spots; the outside pair is twice as large as the inside pair.  Larvae curl up when disturbed.

B) Slugs: There are a few species but all are soft bodied with no legs and are brownish-grey to beige in colour. Their head has 2 pairs of tentacles, one of which holds the eyes. They are essentially “snails without a shell” and are covered in a slimy mucous to keep from dehydrating.  They overwinter in the same fields they were present in the fall so they can be scouted for in the fall to predict spring infestations.  Scouting is as easy as laying a few shingles in high risk spots of the field, directly on the soil and returning a few days later to see if they are present.

C) Wireworm: Larvae are hard bodied, cylindrical, slightly shiny, white (newly molted) to copper in colour, with a distinctive flat head. They have 3 pairs of legs at the front of their bodies.  There are many species of wireworm, some of which remain as larvae for up to 6 years in the soil.  So fields can have a long history of crop damage.  Cool conditions allow them to take advantage of the slow germinating crop.

D) Grubs: All species are white C-shaped beetle larvae with orange-brown heads and dark posteriors. When walking, they drag their butts along the ground. To identify the different species, you need to look at the raster hairs on the underside of the larvae at the butt end.  Ohio State has a great picture of the different raster patterns found here.  Species ID is important as it helps you to know if they are an annual grub (eg. European chafer, masked chafer, Japanese beetle grub) or have a three year cycle which is the June beetle grub.  European chafer are the earliest to be up at the soil surface followed by masked chafer, June beetle and then Japanese grubs being the latest to be up in the spring.

E) Millipedes: Often confused with wireworm because of their hard shell but they are brown to grey-black in colour and have many legs; two pairs per body segment (milli= thousands, pedes= legs). Immature millipedes are whitish, not hardened yet and have fewer legs than the adults.  Both adults and immatures coil up when disturbed, unlike wireworms which don’t tend to curl up.  They are typically scavengers, feeding on organic material in the soil but will take advantage and feed on seeds that are swelling and not growing quickly due to cool soil temps.