Check your alfalfa stands! Reports are coming in from across the province of alfalfa winterkill and winter injury. Damage is being reported in central and western Ontario, including areas such as Perth and Waterloo Counties, where alfalfa winterkill is normally considered a low risk. Winterkill in higher risk eastern Ontario appears to be about average, but is more severe closer to the St Lawrence. Alfalfa winterkill is more common in some of the higher risk older stands, flat heavier clays, and fall harvested stands, but also includes some new seedings, as well as orchardgrass. Cumulative management stresses worsening the situation include late-fall cutting, poor soil fertility and pH, lack of potato leafhopper management (2012), and traffic damage from manure tankers. Environmental risk factors this winter included the wet late-fall that reduced winter hardening, water ponding and icing, extreme cold temperatures, and crown and root disease. A cool, wet spring has delayed green-up stand assessment, and also spring seeding, further complicating how to manage the situation.

Alfalfa fields should be scouted for winterkill and heaving by digging plants and assessing roots and crowns for plant health and disease. Fields that showed signs of stress or disease last year, fall harvested fields, and fields that are slow to green-up should especially be monitored. Using a shovel, dig alfalfa roots, rinse the soil off in a pail, and use a knife to cut open the root and crown. Watch for crown and root rots, brownish disclouration, spongy texture and lack of secondary roots and nodulation. Plant health is often more significant than plant density to a successful yield. The minimum number of healthy plants per square foot should be 12 – 20 for 1st year stand, 8 – 12 plants for 2nd year stands and 5 plants for a 3rd year or older stand. Refer to “Check Alfalfa Stands This Spring and Make A Plan” https://fieldcropnews.com/?p=5845. 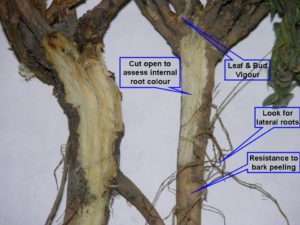 If winterkill is identified early enough, the best option is often to simply replace the winterkilled stand by seeding a new forage stand in a new field in the crop rotation. Corn can follow the winterkilled alfalfa to take advantage of the 100 lbs/ac nitrogen credit and 10 – 15% rotational yield benefit. A direct seeding can be done, or by using a companion forage crop such as cereals or cereal-pea mixtures. (Forage Production From Spring Cereals and Cereal-Pea Mixtures http://www.omafra.gov.on.ca/english/crops/facts/98-041.htm) If an alfalfa stand is uniformly thin or weakened but the grass content is good, an application of nitrogen can significant increase yields and increase protein levels. (Apply Nitrogen To Grass Stands To Increase Yields https://fieldcropnews.com/?p=6830 ) Do not try to repair a stand by interseeding alfalfa into an alfalfa stand because of autotoxicity and disease, unless the stand was seeded the preceding year. Where winterkilled areas are large and patchy, some farmers attempt to repair these areas by no-tilling in red clover and/or Italian ryegrass. These species are difficult to dry for hay, but can make high quality haylage or baleage. Refer to “Forage Options When Alfalfa Winterkill Strikes” https://fieldcropnews.com/?p=6680 .