An uncommon scene the morning of May 21 was ponded water in fields of the Norfolk sand plain, where soils have saturated hydraulic conductivity in excess of 9 cm per hour. Some areas including north Oxford received more than 2.5” of rainfall May 20-21; many areas (Niagara, west Elgin) received just under 1”. Patience waiting for fit soil conditions (even among the typically less patient) has been remarkable this season. Late-planted into good conditions faring better than early-planted into poor conditions is in recent collective memories. The importance of waiting for good soil conditions cannot be overstated; what happens the rest of the season won’t matter if tillage and planting are under poor conditions. Continued patience is encouraged. With rising temperatures in the forecast, emergence will be quick and late seedings will quickly catch up to earlier ones, which have progressed slowly the past week. A concern on the heavy clays is that the surface will bake and seal, and zone below will compact, if temperatures warm and land is worked wet. This will inhibit emergence and root growth. Even lighter textured soils exhibited some crusting after heavy rains last week. Another concern with this year’s weather conditions is that it is favourable for slugs. To minimize damage, residue should be knocked down e.g. burndown.

Winter wheat overall damage reports are 22% of planted acres. East Elgin to Niagara is representative of this proportion at 23% damage. Two-thirds of reported area will be planted to an alternate crop. The crop switching is still ongoing. Some wheat has not yet been fertilized; 60% to most has been sprayed, leaving wheel-track ruts behind in many fields. In Norfolk area: the most advanced is at flag leaf stage; most N is on, and some first fungicide; color is good, but the crop is short and only average yield expected. Flea bane pressure in wheat is notable in Niagara area. Cereal rye is up to boot stage in Norfolk.

Corn is 80% planted on sandy ground, and much has emerged, albeit yellow following last week’s cool days. Hamilton to Jarvis and east has few farms planted, an estimated 1000 ac in total, under poor conditions. Some of last year’s crop has yet to be combined. Hybrid switching is being recommended as per provincial guidelines (by date within CHU groups). Some areas do not anticipate getting on fields for a week or two, so decisions are being made on that basis. Where there is no hope to get on the land for > 2 weeks (e.g. Niagara), the decision is being made to switch to soybeans.

Soybeans have emerged in some fields. Notill acres awaiting conditions suitable for spray traffic are getting weedy, particularly with dandelions. Some fields that were to be fertilized will not be.

Forages Nitrogen application scheduled for grassy hay fields (grassy in some cases due to poor alfalfa persistence) has been delayed until after 1st cut.

Other crops Tobacco planting has started, 40-80% of potatoes are in. Ginseng has overwintered well with no claims. Purple spot is an emerging issue on asparagus. Melon acreage is up this year. Apples are flowering in both Norfolk and Georgian Bay area at the same time, which is unusual. Spraying is impeded by wet conditions. Patchy frost occurred near Scotland over the weekend, but there were no damage reports.

Agricorp final planting dates are June 15 for corn and July 1 for soybeans. The Unseeded Acreage Benefit (USAB) provides compensation if planting is not possible for any reason except drought. Unseeded acres should be reported by June 15. A crop e.g. cover crop can be planted after July 1. All eligible acres of grains and oilseeds must be insured to qualify. Land not planted last year is not eligible.

Where manure pits are beyond full, the recommendation is to apply an amount that will provide enough storage space, plant crops, and apply the rest later, e.g. sidedress or topdress on forages and pastures that are not being grazed.

Saturated soils are prone to N loss by denitrification and leaching. Denitrification (conversion of nitrate to N2 gas and nitrous oxide gas) is the dominant loss process on medium- and fine-textured soils. How much N is lost is influenced by temperature and how long soil is saturated (Table 1). Only nitrate-N is lost, so amount of N in nitrate form during the saturated period must be known or estimated to determine denitrification loss. Nitrate amount will depend on fertilizer type, and time since application until saturated soil conditions. Table 2 provides estimates of the time it takes for some N fertilizer materials to transform to nitrate. The higher the temperature, the faster the conversion. As an example: 100 lb N/ac as UAN was applied on May 10, and soil was saturated from May 20-25. Amount of nitrate present during sated conditions is about 50 lb/ac (25 lb/ac applied as nitrate + 25 lb/ac applied as ammonium and converted to nitrate in 10 days). Anticipated denitrification N loss would be: 50 lb/ac x 10% loss = 5 lb/ac if soil temperature stays cool; 50 lb/ac x 75% = 38 lb/ac if warm soil temperatures prevail. 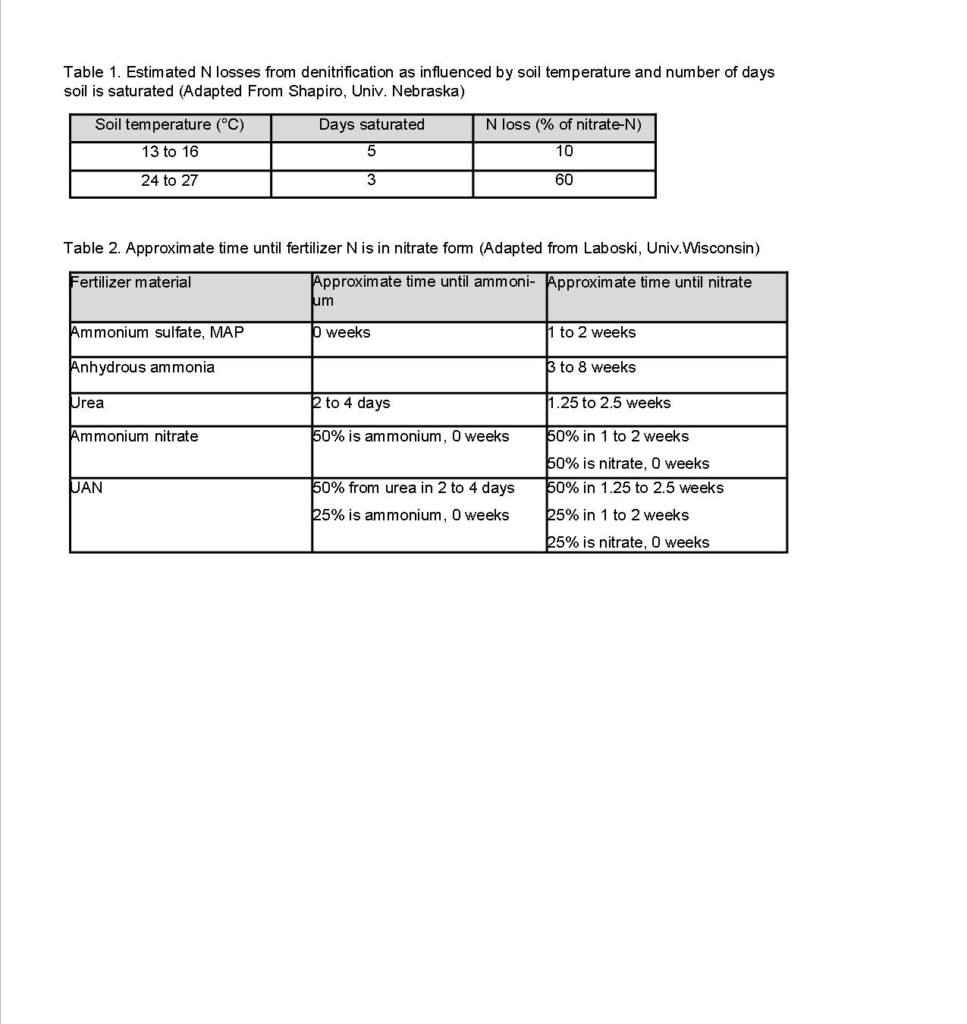