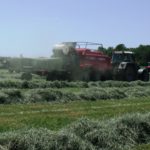 With some dry weather and delayed alfalfa maturity, some high quality 1st-cut hay, haylage and baleage has been made. Yields are quite variable, with some very disappointing yields being reported in western Ontario, but closer to normal yields in the east.

Some alfalfa is showing the sympton of uniform yellowing, indicating sulphur deficiency. Tissue testing of alfalfa (at bud to first-flower, top 6 inches, 35 stems) can be used to determine sulphur deficiencies. The critical level below which there may be an economic benefit from applying sulphur is 0.25% S. http://www.omafra.gov.on.ca/english/crops/field/news/croptalk/2014/ct-0314a3.htm

With concerns about adequate forage inventories, it is important to minimize hay harvest and storage losses. Remove hay bales from the field as soon as possible to prevent spoilage and minimize traffic damage of regrowth. Store dry hay under cover and off the ground to prevent spoilage. Proper hay sheds are easier to justify with the currently high hay prices.

Commercial propionate hay preservatives can be used to inhibit mould growth and heating while bales “sweat” and cure over time as moisture dissipates from the bales in storage. Use the correct application rate according to the percent moisture of the hay. Because large square bales are more dense, they require more acid than other bale types of similar moisture. Probe-type hand-held electronic moisture testers can be subject to variability and error. They should be calibrated to factors that can influence readings, such as forage species, bale type, acid and bale density. It is essential that hay storages have adequate ventilation to enable moisture to dissipate from bales. Tightly stacking bales should be avoided. Don’t store preservative treated and untreated dry hay in direct contact with each other as the moisture will migrate to the dry hay.

Making “baleage” can be easier than dry hay when we get into rainy weather, by reducing the risk of rain damage in shorter harvest windows. Use enough plastic. Although a minimum of 6 mils of plastic film has typically been recommended, 8 mils or more is preferable, particularly with drier baleage. Make firm, dense, uniform bales. Bale at 40 – 55 % moisture. Lower moistures can also work and make excellent baleage, particularly with large square bales wrapped with adequate plastic, but can be at a greater risk of spoilage if done incorrectly. Wrap round bales within 2 hours of baling on hot days and within 4-12 hours at cooler temperatures. Avoid using hay that was rained on. Avoid incoporating soil when raking to minimize contamination by clostridia bacteria. Do not incorporate soil into the windrow with the rake. Be sure to repair all tears and holes in the plastic. (Baleage Tips https://fieldcropnews.com/?p=3531)

Low soil fertility reduces forage yield and persistence. Forages have high P and K removal rates. A tonne of mixed hay removes about 14 lbs P2O5 and 58 lbs of K2O, currently equivalent to about 1.5¢ per lb of hay. Without replacement with manure or commercial fertilizer, soil tests will drop quickly. If a soil test is below 120 ppm K, you can expect a yield response from top-dressing potassium. (https://fieldcropnews.com/?p=3760 ) Nitrogen applied to grassy fields with adequate moisture will increase yields. (https://fieldcropnews.com/?p=6830 ) Fertilizer and liquid manure should be applied immediately after harvest to minimize wheel traffic damage.

In parts of the province that were wet in April and early-May, many new seedings were done later than optimum. Saturated soils often result in a higher risk of alfalfa seedling diseases, such as aphanomyces root rot and phytophthora root rot. Watch new seedings for annual broadleaf weeds and to determine optimum time of spraying. The risk of injury to alfalfa seedlings is greatly increased when 2,4-DB application is made outside of the first- to the third-trifoliate stage window (typically about 20 – 25 days after seeding). 2,4-DB can suppress legume growth for a period of 2 – 3 weeks and severe injury can occur under drought or high temperatures. Field experience has demonstrated that reducing the rate of herbicide can reduce the risk of injury to alfalfa seedlings while providing acceptable suppression or control of weed seedlings. Refer to Publication 75, Guide To Weed Control. http://www.omafra.gov.on.ca/english/crops/pub75/pub75ch10.pdf

Low soil moisture levels in many pastures are resulting in slow grass growth. Rain forecast for June 11/12 will be welcome and provide a good boost to pasture growth. Rotationally grazed pastures are now into their second rotation. Set stocked pastures are showing areas of over grazing which will result in reduced growth for the remainder of the grazing season. At the same time, plants that were not grazed have headed and will generally be left by grazing livestock.

If mature plants with maturing seed heads or flowering weeds are plentiful in your pastures then consider clipping to stimulate new forage growth and stop the weeds from setting seed. Rotating pastures every 1-3 days and allowing sufficient rest and recovery time of (30-45 days depending on growing conditions) will give the most productivity.