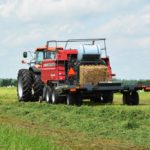 First-cut continues with variable yields. Yields are generally good in eastern Ontario. In western Ontario areas where alfalfa winterkill and injury occurred, stands are thin, with many reported yields at 50 – 80% of normal. This has created some concern about producing adequate forage supplies. Considerable acres have been seeded to annual forages such as ryegrass, cereals, cereal-pea mixtures and sorghums. Many of those affected also plan to seed cereals and Italian ryegrass following winter wheat harvest. (Summer Seeding Oats For Forage https://fieldcropnews.com/?p=7813 )

Be sure to monitor hay storages for heating. Hay that is baled at too high a moisture will heat rapidly. Heating occurs from the rapid growth and respiration of mould and bacteria. If the moisture and heat cannot dissipate, high temperatures and more moisture build and are self-sustaining. Even low amounts of heating can result in dusty hay with reduced feed quality and palatability. If severe, heating can result in a barn fire. The critical time for spontaneous combustion is usually 2 to 3 weeks after the hay is put in the barn. If you detect a slight caramel odour or a distinct musty smell, chances are you have a problem. Probe-type hand-held electronic moisture testers are useful tools for monitoring hay heating. However, the moisture readings can be subject to variability and error, and testers should be calibrated to forage species, bale type, acid use and bale density. There is typically variability in moisture readings between bales, so probe in multiple locations. Hay bale temperature 2 – 3 days after baling will often be 10°F (5°C) above what the ambient temperature was at the time of baling. Temperatures above 120ºF (50°C) indicate that there is some microbial activity that is a problem that should be monitored closely. Refer to“Silo and Hay Mow Fires http://bit.ly/omafforage1) If a temperature probe is not available, insert a copper or metal pipe into the mow. If after an hour it is too hot to hold with bare hands, there is a severe problem. It is essential that hay storages have adequate ventilation to enable moisture to dissipate from bales. Tightly stacking bales should be avoided. The use of pallets prevents spoilage of the bottom row of bales.

Commercial propionic acid hay preservatives can be used to inhibit mould growth and heating while bales “sweat” and cure over time as moisture dissipates from the bales in storage. Use the correct application rate according to the percent moisture of the hay. Because large square bales are more dense, they require more acid than other bale types of similar moisture. Probe-type hand-held electronic moisture testers can be subject to variability and error. They should be calibrated to factors that can influence readings, such as forage species, bale type, acid and bale density. In-line moisture sensors that adjust application rates automatically according to moistures provides more accuracy. It is essential that hay storages have adequate ventilation to enable moisture to dissipate from bales. Tightly stacking bales should be avoided. Don’t store preservative treated and untreated dry hay in direct contact with each other as the moisture will migrate to the dry hay.

Making “baleage” is an increasingly common method of producing quality forage with existing baling equipment. Use enough plastic! Although a minimum of 6 mils of plastic film has typically been recommended, 8 mils or more is preferable, particularly with drier baleage. Make firm, dense, uniform bales. Bale at 40 – 55 % moisture. Lower moistures can also work and make excellent baleage, particularly with large square bales wrapped with adequate plastic, but can be at a greater risk of spoilage if done incorrectly. Wrap round bales within 2 hours of baling on hot days and within 4-12 hours at cooler temperatures. Large square bales are a little more forgiving of later wrapping. Avoid using hay that was rained on. Avoid incoporating soil when raking to minimize contamination by clostridia bacteria. Be sure to repair all tears and holes in the plastic. (Baleage Tips https://fieldcropnews.com/?p=3531)

Be sure to have recent soil sample results to use in forage fertility management. Low soil fertility reduces both forage yield and persistence. Forages have high P and K removal rates. A tonne of mixed hay removes about 14 lbs P2O5 and 58 lbs of K2O, currently equivalent to about 1.5¢ per lb of hay. Without replacement with manure or commercial fertilizer, soil tests will drop quickly within the life of the stand. Many hay fields have low P and K soil tests and are losing yield to poor fertility. If a soil test is below 120 ppm K, you can expect a yield response from top-dressing potassium. (Don’t Lose Hay Yield To Poor P and K Fertility https://fieldcropnews.com/?p=3760 ) Nitrogen applied to grassy fields with adequate moisture will increase yields. (https://fieldcropnews.com/?p=6830 ) Fertilizer and liquid manure should be applied immediately after harvest to minimize wheel traffic damage. (Manure Applied To Forage Has Value https://fieldcropnews.com/2013/05/7189/)