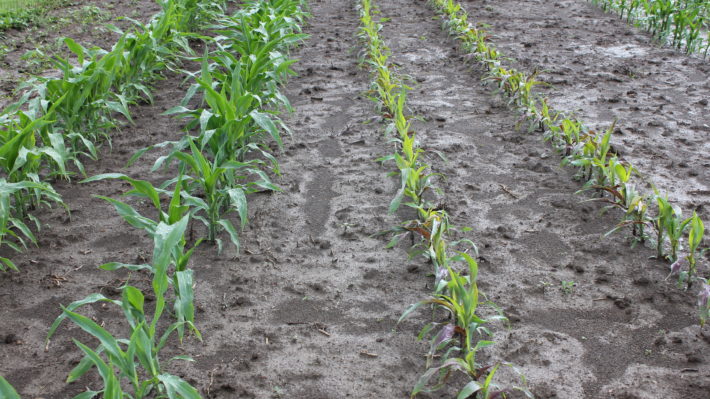 The following 10 herbicide injury scenarios in corn were presented at the South West Crop Diagnostic Days on July 9th and 10th, 2014.

Corn was sprayed with a 300 mL/ac rate of Assure II (quizalofop-p-ethyl) and 0.5% v/v of Sure-Mix. Since, the Enlist hyrbid has tolerance to this sub-class of group 1 herbicides, called the “fops“, there was no injury observed. However, the non-Enlist hybrid displayed the typical and lethal injury symptoms that occur at roughly 10-14 days after application. Response of an Enlist corn hyrbid (left) and a glyphosate/glufosinate tolerant hybrid (right) to an application of Assure II. How corn normally responds to an application of Assure II (quizalofop-p-ethyl) at 10 days after application. Stunting, purpling and yellowing of leaves. If the whorl was pulled out it would be brown at the tip.

So if you have volunteer “Enlist” corn in soybeans, how would you control it given that it is tolerant to the “fops” (Assure II, Excel Super and Venture Liquid)? Are “Enlist” hyrbids sensitive to the “dims” (Poast Ultra, Select)? In the below photos, both hybrids show the typical response when sprayed with “group 1” herbicides. Response of both hybrids to an application of Poast Ultra at the 130 mL/ac rate. A closeup of “group 1” herbicide activity on corn at roughly 10 days after application. The tell-tale sign that a group 1 herbicide has been effective at killing a volunteer corn plant – the whorl is easy to pull out, the tip is brown and smells of rotting corn.