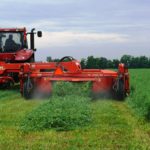 While cutting alfalfa in the fall is often practiced in Ontario, it does create some risk to stand health, depending on the location, stand age, harvest frequency and other factors. The decision whether to cut alfalfa should weigh these factors and the immediate need for forage against the increased risk of winterkill and reduced yields the following year. Everyone’s situation and comfort with risk is different. When faced with forage inventory shortfalls and low agronomic risk, taking a fall cutting is understandable. In situations where forage inventories are more than adequate, increasing the risk of winterkill by fall cutting may be far less acceptable. Decide what is an acceptible risk for your situation. Of course, if the field is to be rotated the following spring, take the final cut anytime.

It can be very tempting to cut some alfalfa for haylage or baleage in the fall, particularly when supplies are tight or there is a lot of growth. If you do decide to cut, consider leaving some check strips that you can use for comparison next year. There are essentially 3 things that can and do happen as a result of taking a fall harvest of alfalfa:

This is most likely to occur where management is good and plant stresses are minimal – with good soil drainage, fertility and pH; a young, vigorous (1-3 year old) stand with minimal disease and insect pressure. Some luck with adequate snow cover and no ice sheeting will help.

If diagnosed early in the spring, the crop rotation can be modified with a new alfalfa seeding being made, but there is an “establishment year yield loss” associated with that. Even where winterkill does not occur, stressed, weakened stands are at a greater risk of continued decline and poor yield.

Fall harvests are usually not very high yielding. Even when winterkill does not occur, research shows the extra yield harvested during the critical harvest period is often offset by reduced vigour and lower1st-cut yield the following spring. It can sometimes be difficult to observe, but still be significant.

The Critical Fall Harvest Period for alfalfa is the 6-week period (450 Growing Degree Days) preceeding the average date of killing frost. Not cutting during this period allows alfalfa plants to re-grow and build up sufficient root reserves to survive the winter and grow more aggressively in the spring. When cut, early in the period, the alfalfa will use the existing root reserves for regrowth, “emptying the tank”. Later in the period, the alfalfa uses photosynthesis to produce carbohydrates and stores them as root reserves, “refilling the tank”. Cutting in the middle of the Critical Period (3rd or 4th week is higher risk than cutting at the beginning or end of the period.

The Critical Fall Harvest Period begins as early as August 10th in northern Ontario, August 25 – 30th for eastern and central Ontario, and September 4th in the southwest. However, it is difficult to predict when that killing frost will actually occur. The actual date seldom occurs on the average date, so the beginning of the Critical Fall Harvest Period is a guideline only.

Some areas of the province, such as the Ottawa Valley, have a higher historical risk of winterkill. Flat, heavier soils that “pond” in the winter when tiles are frozen are at greater risk of winterkill. From time to time, fall cutting has contributed to alfalfa winterkill and injury in areas that are typically considered low risk, including western Ontario. We can never accurately predict what the weather will bring, but wet saturated soils in the fall reduce winter hardening and contribute to winterkill.

Aggressive cutting schedules with cutting intervals of less than 30 days between cuts increases the risk of winterkill, while intervals over 40 days (allowing flowering), reduces the risk. When harvest schedules are delayed by a late start or difficult weather, harvesting the normal number of cuts without cutting in the fall is not possible. Disappointing 1st-cut yields where 4th cut was taken the preceeding fall are sometimes observed.

In addition, fields with:

are also at increased risk of winterkill and are poor candidates for fall harvesting, unless you are planning to rotate.

If fall harvesting, the risk of winterkill can be reduced (but not eliminated) by cutting towards the end of alfalfa growth, close to a killing frost. Little root reserves will be depleted by regrowth, but lack of stubble to hold snow to insulate the alfalfa crowns against cold weather damage and heaving may be a problem. Leaving at least 6 inches of stubble will help. Stubble will also protrude through winter ice sheeting, should that occur.

There is always the question of smothering in heavy forage stands that are left unharvested. Heavy stands of grasses or red clover can sometimes smother over the winter because the top growth forms a dense mat. In contrast, alfalfa loses most of its leaves as soon as there is a hard frost, and the remaining stems remain upright and seldom pose any risk of smothering.