Current P and K recommendations in Ontario guide crop producers to apply a rate of fertilizer that will provide the greatest potential of an economic response during the year of application. Increases in crop yields over time have resulted in higher nutrient removal rates which have decreased the “equilibrium” soil test values where average crop removal rates equal the recommended application rates. Recent research in Ontario has demonstrated that starter fertilizer can provide significant yield and economic gains on sites with low testing soils when sufficient rates of the proper product are applied (ie. high rates of dry fertilizer). Despite this, many question whether applying sufficient rates on low or medium testing soils can equal the yield potential attained for sites where fertility is built up to a non-responsive range and maintained. Building phosphorous and potassium levels in soil represents a significant expense to growers, and can pose economic (ie. land rental) and environmental (phosphorous runoff) risks. Due to the limited amount of data available, this research is being conducted to investigate how starter fertilizer selection (product, rate) and soil fertility management strategy (sufficiency or build and maintain) influence the economics and productivity of corn, soybeans and wheat over the long term in Ontario.

The key objectives of this project include:

Two locations testing low to moderate in P and K (Table 1) were secured at Elora and Bornholm in 2012 while a third location at Lucan was secured for 2014.  In addition a 4th site is being managed by Dr. David Hooker at Ridgetown Campus, U of Guelph.  Each location has four main fertility blocks to investigate yield response between a “build and maintain” and “sufficiency” fertilizer approaches. Fertility blocks are currently being built up to non-responsive values through regular fall applications of broadcast fertilizer, and include a high soil test P, high soil test K, high soil test P and K, and a background P and K. Once high fertility blocks have been built, they will be maintained at those levels. Various starter fertilizers will be applied in a split-plot fashion across the main fertility blocks to investigate the interactions between starter fertilizer and soil fertility. Final broadcast by starter plots are 10’ wide and 60’ in length. Starter fertilizer treatments (Table 2) are applied to corn with a 4-row John Deere 7000 corn planter customized to deliver liquid or dry fertilizers either in-furrow or in 2”x2” bands.

Table 1. Soil test P and K of control plots at initiation of each trial

* where MR and HR denote moderate and high probabilities of response, respectively.

Corn, soybeans and wheat are present at each trial for each year, receive similar starter fertilizer treatments, and are rotated across crop blocks each year. All crops are harvested with a John Deere 6600 combine retrofitted with a batch-weigh hopper and moisture meter for individual plot weight and moisture measurements. Soil sampling of individual plots at Elora and Bornholm commenced in the fall of 2014 to evaluate soil fertility building to date. A timeline of trial establishment and data collection to date is presented in Table 2.

By the end of the 2014 growing season, the Elora and Bornholm trials have undergone three years of fertility building while the Lucan trial has only undergone one. Where no broadcast fertilizer was applied at Elora and Bornholm, starter fertilizers containing both P and K demonstrate clear yield responses, with a slight response to a low rate in-furrow liquid starter, and a large response to a high rate banded dry fertilizer (Figure 1). These responses are consistent with previous research at locations with low to moderate background fertility levels. Where P and K had been broadcast, this starter response is largely muted as all plots respond to the high rates of broadcast fertilizer. While a high rate P and K starter fertilizer provides a very large yield boost relative to no starter under the no-broadcast treatments, it did not appear to match the yield potential of where high rates of P and K had been broadcast, although these higher yields were attained in plots receiving over 4x as much product. 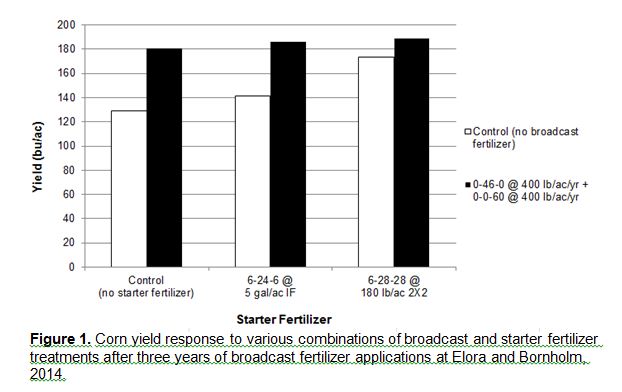 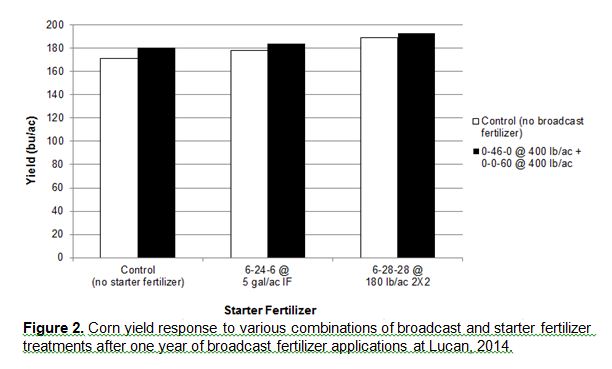 Given the fact that fertility building is still underway at these locations, conclusions and analysis of economic performance of the sufficiency and build-and-maintain approaches will not be applied until all locations receive multiple years of data under both a background and fully built fertility program.

To date, three years of soil fertility building and yield data have been completed at Elora and Bornholm, while one year of soil building and yield data has been completed at Lucan. Soil testing has been conducted on a plot basis for the soil fertility building treatments at Elora and Bornholm. Looking at data averaged across both Elora and Bornholm, starter fertilizer responses are observed under non-broadcast treatments, but less so under broadcast. While the highest overall yields are always obtained under broadcast applications, these treatments have received over 4x the amount of fertility being applied through high rate starter. Final yield and economic performance will be evaluated once high fertility soil blocks have been built, and several years of data collected.

Soil fertility building will continue as required at sites. Soil sampling will be conducted to monitor building or maintenance requirements. Crop planting with the various starter fertilizer treatments and yield monitoring will continue through to 2023.

This project is funded by the Grain Farmers of Ontario (GFO) and the long term commitment to this type of project by the GFO is greatly appreciated.  Appreciation is expressed to Middlesex SCIA for support on this project and for excellent technical support by Shane McClure and Ben Rosser.