In 2012 Dr. David Hooker (U of G, Ridgetown) conducted trials to re-evaluate the correct timing for maximum economic return. The trial results were surprising in that soybeans responded more when sprayed relatively early in the season. An application at the R 2.5 growth stage (full flower) provided more yield than at later grower stages (pod stages), which are the more typical spray time recommendations. A new foliar fungicide (Priaxor) has also been shown to provide greater yield response than Headline and was tested in this project. These trials were designed to assess the best fit for fungicides on soybeans.

In order to determine the best management practice for fungicide application timing, a number of field scale trials were conducted in the 2014 growing season. The treatment list, tested on two varieties at each study location, was used to evaluate the use of in-furrow liquid Priaxor fungicide on soybeans as well as foliar application timings and tank mixes.  The treatments applied were as follows:

The 2014 growing season proved to be a challenging one. Wet conditions were typical in most areas of Ontario and persisted throughout the growing season. The temperature was slightly below average; however, the conditions were favourable for disease incidence in soybean fields. White mould was discovered in both the St. Thomas and Perth sites, but was not observed in the Lucan location. 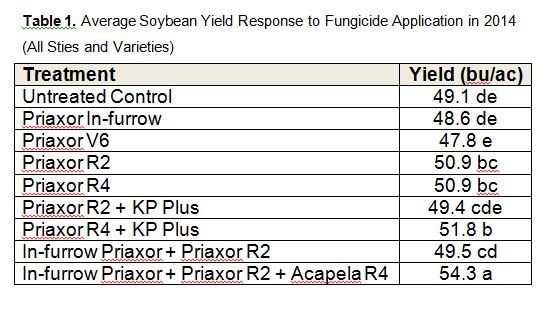 Table 1, above, shows that a positive yield response of about 1.8 bu/ac was observed when Priaxor was applied at the R2 or R4 soybean growth stage. There was no statistical yield advantage to adding the KP Plus foliar fertilizer although there was a small numerical advantage at the R4 growth stage. These results concur with previous research completed in Ontario that showed about a 2 bu/ac average yield gain when applying one application of foliar fungicides.

The greatest yield response was observed in the most intensive treatment, which included an in-furrow and foliar R2 application of Priaxor, with an additional foliar application of Acapela at the R4 growth stage. The average yield increase observed across all sites and varieties was 5.2 bu/ac.  The in-furrow portion of the treatment likely did not have an impact on the yield since that treatment by itself (treatment #2) did not significantly change yields.

There was no statistical change in yield when the fungicide was applied solely in-furrow, or at the V6 growth stage.

We would like to thank the cooperators who lent their time and land to the project. We would also like to thank Pioneer, Dekalb and BASF for materials provided for this project. The access to tractors for these field projects from John Deere is greatly appreciated.  This project was conducted in Partnership with Dr. David Hooker (U of G).