There is some confusion on the approach for managing glyphosate resistant Canada fleabane in soybeans.  I provide two scenarios that have been often asked this past winter and their solutions based on the learnings of Dr. Peter Sikkema’s applied research program out of the University of Guelph (Ridgetown campus).

Scenario # 1: No-till soybeans with Canada fleabane emerged prior to planting.

Solution: An effective pre-plant herbicide program is critical. Once the soybean crop has emerged, there are very limited options for managing this weed. Table 1 provides an overview of the effectiveness of various pre-plant treatments in soybean.

Originally, the addition of Eragon + Merge to glyphosate provided very effective control of glyphosate resistant Canada fleabane. As more locations with different populations of Canada fleabane were evaluated, Dr. Sikkema began to notice quite a bit of variability in control. In 2014, Chris Budd, a graduate student in the Department of Plant Agriculture began to evaluate the addition of other modes of action to the treatment of glyphosate, Eragon and Merge. His preliminary findings were that the addition of metribuzin at 400 grams active ingredient/ha provided much more consistent control of Canada fleabane. A 400 g a.i./ha rate of metribuzin is equivalent to 216 g/ac of Sencor 75DF. Of course there are plenty of other soybean herbicides that contain metribuzin at a rate equivalent to or above the 216 g/ac rate of Sencor 75DF. They are shown in Table 2. 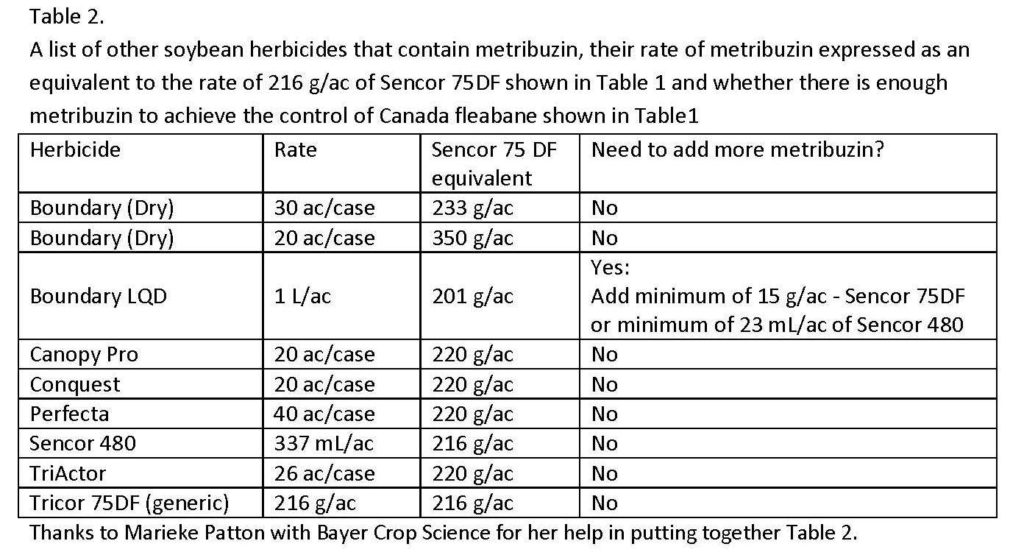 Scenario #2  There is no Canada fleabane emerged and I’m about to plant soybeans, what should I do?

Solution: According to Dr. Sikkema, if he observed 100% control of Canada fleabane the day that soybeans emerged out of the ground then not a lot of fleabane emerged later. Therefore if on the day or close to the day of planting you see no Canada fleabane seedlings, there is a good chance they will not become a problem. Unfortunately there is not a lot of Ontario data that has evaluated the residual control of un-emerged Canada fleabane with herbicides. If you wanted to take no chances with this weed even if it is not in the field prior to planting, the experience in other North American jurisdictions is that the active ingredients flumioxazin (i.e. Valtera, Perfecta, Fierce) and metribzuin (Table 2) will provide control of germinating Canada fleabane (i.e. plants that have not yet emerged).

HOW WILL THE USE OF TILLAGE AFFECT YOUR DECISION TO MANAGE FLEABANE?

If fleabane is emerged  prior to planting, a tillage implement can control fleabane if the plants are small and are at low densities. If fleabane plants are large and at high densities it is unlikely that tillage will control all plants. Under such scenarios it would be advisable to apply one of the pre-plant treatments for the control of emerged fleabane that is outlined above. Herbicide treatments should be made prior to performing the tillage pass.

For your notes, a .pdf version of this article:Fleabane_soybean_2015_spring