Synopsis: Dry conditions continue throughout most of the area with the exception being western Essex.   Rainfall around area continues to be variable with areas of Essex receiving the predominant amount of moisture over the past two weeks. In dry areas, many are considering planting soybeans to 3” to get to moisture.   Impact of the frost last week was minimal for corn and soybeans with the greatest concern in north Kent but affected plants should make a full recovery. The cooler temperatures forecasted for this week have many growers concerned about impact on young corn, soybeans and vegetable/tree fruit crops. Frost tolerances for soybeans -2.5C for 4 hrs and corn -1.8C for 4 hours depending on growth stage. Wireworm damage on two leaf corn identified on a silty clay soils, not a scenario that would predict wireworm. Trap count near Chatham – 5 traps in results of 5, 4, 4, 3 and 1.   Report from Lambton observed red clover ground was fit later than some other cover crops such as oats but stands are better in the Red Clover soils.

Corn: 2-3 leaf corn in excellent condition (ahead of schedule) with many fields planted deeper than normal (2” plus). Most areas are finished corn planting with excellent emergence and stands . The southwest corner of Essex is the exception where it remains too wet to plant. According to Dr. Dave Hooker, Field crop Agronomist University of Guelph Ridgetown Campus, on average over the past 14 years, 90% of corn in the province has been planted by May 23: 2015 is well ahead of schedule. Residue levels in some heavy clay soils are a concern and have caused a few growers to switch to soybeans from corn. Remember stand and emergence can be influenced with residue (cooler, wetter). However, other areas report no residue issues. 30-50% residue levels will assist in maintaining soil conditions and reduce planting concerns. Damage from frost is obvious in some fields but expected to make full recovery.

Soybeans: Planting is 50% complete overall variable. Many growers are finished, but others are only 10-20% planted. Frost damage from last week was nil in soybeans.  Corn root balls have been a problem with many no-tillers complaining of root balls interfering in planting.

Wheat: Early wheat is at the flag leaf stage with variability still a concern. Late planted wheat has begun to green up but many fields have thin populations. Planting date was the biggest factor this year in wheat and has influenced maturity dates (first node for late wheat with early wheat at flag). The gap in maturity is greater than normal. Some more wheat was replanted over the last week. Cereal leaf beetles have been found, but below thresholds. Scout. Stripe rust been reported in many areas of the US Midwest and recently in Indiana. If stripe rust is observed please report to Albert Tenuta 519-674-1617 or albert.tenuta@ontario.ca so samples can be collected and included in North American race survey.

Tomatoes: Frost last week did considerable damage in tomatoes. The most impacted area is north of Chatham although it was very spotty. Impacted fields range from completely wiped out to minimal damage. 5-6% of total acreage was impacted but getting the replanting plants problematic since most used up with filling the need from the frost replanting (Insurance plant shortage). Others on hold since many growers waiting for this weeks forecasted cold weather to pass.   Check stands since in some fields 10-15% plants lost with another 10-15% hurt. Some black cutworm and wireworm damage reported.

Herbicides: Concern of emerging weeds especially grass in tire tracks and compacted areas. Scout weeds and evaluate pre-emerge herbicides since variable activation based on moisture levels. Use of multiple modes of action in herbicide use has increased this spring. Be alert and scout for weeds since respraying fields maybe neccesary if premerges have not had enough moisture to activate. If respraying is required the critical period starts at 3 leaf corn.

Residues/Tillage: Considerable discussion of residue levels and influence on soil temperature and moisture levels. Surprising how well clay soils have worked up this spring and great planting conditions. Different vertical tillage systems are having an impact but still very moist under heavy residues. Standing soybean residue is a concern for some growers this spring and causing challenges. (See images provided by Morris Sagriff at bottom of the minutes. Thanks Morris)

Alfalfa: Hay fields harvested late last fall are behind in growth and yields will be reduced. The quality of first cut alfalfa is good and buds are starting in some fields now. Cool, moisture has slowed growth in alfalfa and the same in grass pastures and cutting will begin soon. Grass pastures slow or stalled due to cooler conditions and frost.

Wheat – reports slowed down in past week as more growers have decided to keep stands. There are a total of 17,500 acres for which damage reports were filed for in the area to date. Total winter wheat acres planted for the 2015 crop year were 101,690 acres. This translates into 17% if all of the 17,500 damaged acres were ripped up and this is not the case. A figure of around 10 to 12% would be more accurate.

Corn – Damage Reports totalling 2,080 acres were called in with 150 acres due to excess rainfall and 1,930 acres due to the frost.

Soybean – Damage Reports totalling 2,300 acres were called in with 640 acres due to excessive rainfall and 1,660 acres due to frost.

Tomatoes -Damage Reports totalling 140 acres were called in with all 140 acres due to frost.

Online acreage reporting system up today as well as traditional phone in service. You can use the online system at www.agricorp.com to report acreage using your AgriCorp number. Once completed you will receive a confirmation notice.

SCN discussion: Questions arose concerning lack of soybean varieties containing the Peking SCN resistance source. The Peking source is newer SCN source in Ontario compared to the traditional PI88788 SCN resistance which is incorporated in the vast majority of SCN varieties in the province. It is important to remember that SCN resistant varieties can vary greatly in their activity against SCN since several genes are involved to provide resistance to SCN for each of the different SCN sources (PI88788 and Peking in Ontario). Work conducted by Tom Welacky (AAFC Harrow) in conjunction with OMAFRA, GFO and the seed industry have shown PI88788 is still very effective in the majority of fields in the province but new populations in some fields are able to reproduce on PI88788 varieties. For these reasons we continue to recommend crop rotation (nonhost crops) as well as rotating SCN resistance varieties each time. If possible to also rotate between PI88788 and Peking (and future new SCN sources). This will help maintain the effectiveness of these resistance genes. We do encourage seed companies and both public/private breeders to continue developing new PI88788 and especially Peking varieties for future use.

New Wheat Publication: ‘Identifying Wheat Diseases Affecting Heads and Grain’ can be downloaded at www.gfo.ca/research. The guide book was a collaboration between the multi-state committees on small grain diseases in North America. Ontario contributors included Albert Tenuta, field crop pathologist, Ontario Ministry of Agriculture, Food and Rural Affairs, and Dr. Dave Hooker, field crop agronomist, University of Guelph Ridgetown Campus. Funding for this project was provided through the Growing Forward 2 program, a partnership between Agriculture and Agri-Food Canada and the Ontario Ministry of Agriculture, Food and Rural Affairs.

Weather information: Check out this website which has daily updates from a volunteer network of rainfall recorders. 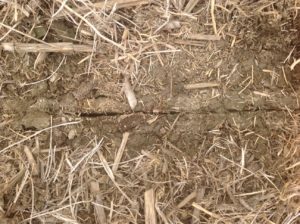 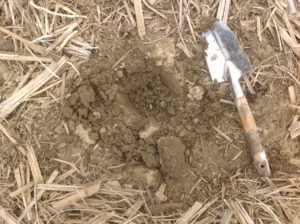 Figure 2– Areas in fields with less surface residue are ready for planting sooner as they warm up better allowing for better drying, better soil friability and good seed furrow closing