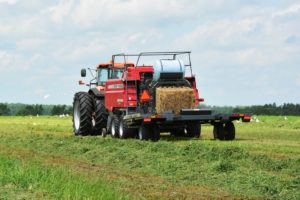 Heavy rains and wet soils since June 6th have delayed haying operations. Considerable amounts of quality haylage and baleage were made, but the weather must clear before much haying can resume. Initial yield reports were quite variable, with some very disappointing yields being reported in western and central Ontario (60 – 100% of normal). Yields have been closer to normal (85- 100%) in eastern Ontario. Dry spring weather limited forage growth and yield (particularly grassier fields), but other factors have contributed as well, including winter injury, fall cutting, poor fertility, and frost damage. Recent rainfall events are improving new seedings and 2nd cut regrowth, and will increase yields of the remaining firt-cut, but at the expense of much more advanced maturity with reduced nutrient quality. Operating harvest equipment on soft, wet soils before they are firm enough can result in permanent wheel traffic damage to alfalfa crowns that impact the life of the stand.

There are many poor looking newly established forage stands. Although they were seeded early this spring into good soil conditions, extended dry weather without rain delayed the germination. Delayed germination has the same effect as delayed seeding by allowing weeds to establish. Forage germination and emergence was very uneven, particularly where the seedbed was not firmed with adequate packing and proper seed placement. Where a companion crop was seeded, such as oats or oat-pea mixtures, significant competition for moisture during that early dry period with the new forage seedlings could negatively affect establishment. Recent heavy rains have flooded some of the new stands, and there will be increased risk of aphanomyces and other fungal seedling diseases.

2,4-DB sprayed in May and early June during the hot, dry weather suppressed some alfalfa seedling growth, with some symptoms of injury. The risk of injury to alfalfa seedlings is greatly increased when 2,4-DB application is made outside of the 1 to 4 trifoliate stage window. Many new alfalfa seedings have very uneven emergence, which in addition to rain delays, have made it challenging now to stage 2,4D-B applications at the desired 1 to 4 trifoliate stage.  (Successful Forage Establishment https://fieldcropnews.com/?p=9535)

The cost of indoor storage is only a small proportion of the total cost of producing hay, and is easily recoverable by maintaining forage quality and minimizing spoilage losses. It is essential that hay storages have adequate ventilation to enable moisture to dissipate from bales. Tightly stacking bales should be avoided. The use of pallets prevents spoilage of the bottom row of bales.

Be sure to monitor hay storages for heating. Hay that is baled at too high a moisture will heat rapidly. Heating occurs from the rapid growth and respiration of mould and bacteria. If the moisture and heat cannot dissipate, high temperatures and more moisture build and are self-sustaining. Even low amounts of heating can result in dusty hay with reduced feed quality and palatability. If severe, heating can result in a barn fire. The critical time for spontaneous combustion is usually 2 to 3 weeks after the hay is put in the barn. If you detect a slight caramel odour or a distinct musty smell, chances are you have a problem. Probe-type hand-held electronic moisture testers are a useful tool to monitor hay heating. However, the moisture readings can be subject to variability and error, and testers should be calibrated to forage species, bale type, acid use and bale density. Hay bale temperature 2 – 3 days after baling will often be 10°F (5°C) above what the ambient temperature was at the time of baling. Temperatures above 120ºF (50°C) indicate that there is some microbial activity that may be a problem. Refer to“Silo and Hay Mow Fires http://bit.ly/omafforage1) If a temperature probe is not available, insert a copper or metal pipe into the mow. If after an hour it is too hot to hold with bare hands, there is a severe problem.

Hay stored outside should be properly covered with bale tarps to shed rain and snow to minimize spoilage losses. Wicking of moisture can be very significant, so use pallets or crushed stone to keep them off the ground. Six inches of spoilage around the outside of a round bale represents 20% of the volume of a 5 foot diameter bale, and 25% of the volume of a 4 foot bale. With high hay prices, this is an expensive loss.

Commercial propionate hay preservatives can be used to inhibit mould growth and heating while bales “sweat” and cure over time as moisture dissipates from the bales in storage. Use the correct application rate according to the percent moisture of the hay. Because large square bales are more dense, they require more acid than other bale types of similar moisture. It is essential that the hay storages have adequate ventilation to enable the extra moisture to dissipate from bales. Tightly stacking bales should be avoided. Don’t store preservative treated and untreated dry hay in direct contact with each other as the moisture will migrate to the dry hay. (Preventing Mouldy Hay Using Propionate Preservatives https://fieldcropnews.com/?p=3655)

Low soil fertility reduces both forage yield and persistence. Forages have high P and K removal rates. A tonne of mixed hay removes about 14 lbs P2O5 and 58 lbs of K2O, currently equivalent to about 1.5¢ per lb of hay. This means that a 3 tonne crop of hay removes an equivalent of about 90 lb of MAP and 290 lbs of muriate of potash. Without replacement with manure or commercial fertilizer, soil tests will drop quickly within the life of the stand. Be sure to have recent soil sample results to use in forage fertility management. If a soil test is below 120 ppm K, you can expect a yield response from top-dressing potassium. Recent soil and tissue test surveys indicate that many soils are K deficient, even on dairy farms.  (https://fieldcropnews.com/?p=3760 )

Some alfalfa is showing symptons of sulphur deficiency. Tissue testing of alfalfa (at bud to first-flower, top 6 inches, 35 stems) can be used to determine sulphur deficiencies. The critical level below which there may be an economic benefit from applying sulphur is 0.25% S. (Sulphur On Alfalfa https://fieldcropnews.com/?p=9092)